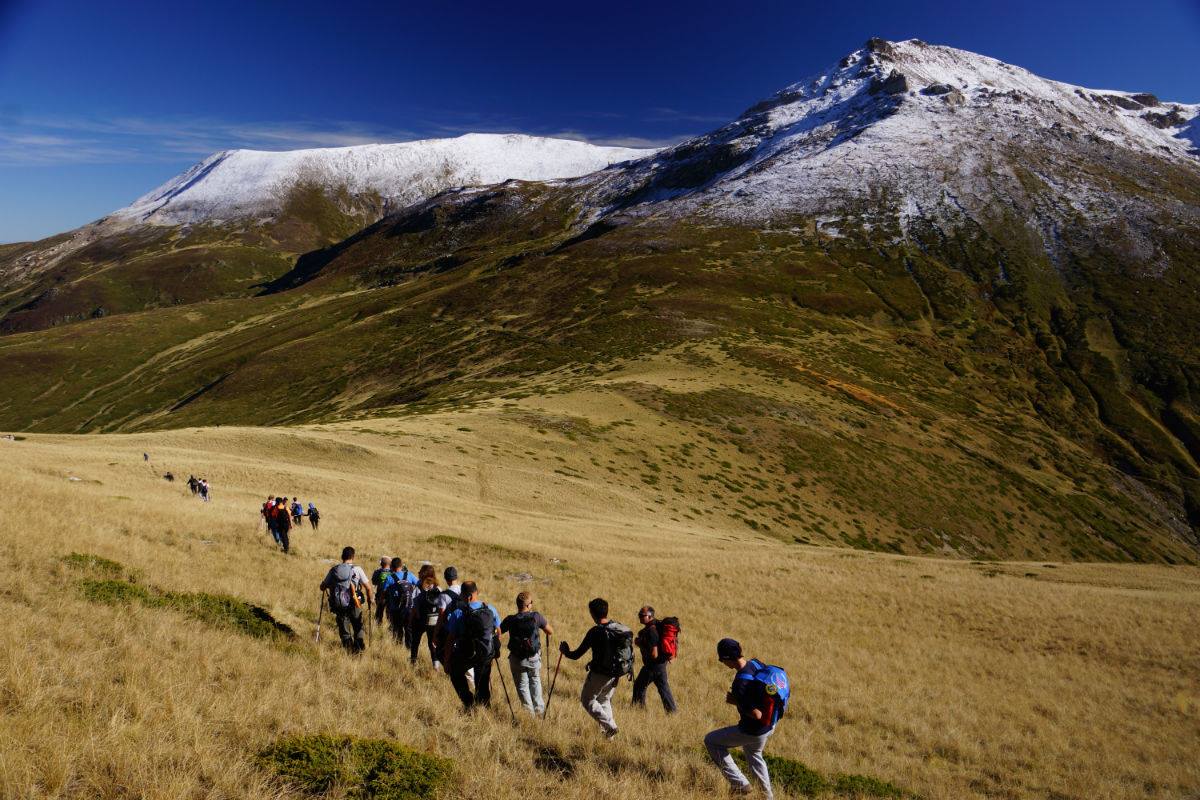 The Šar Planina mountains are one of the richest biodiversity areas in the Balkans, but they are not protected. The project of a Natural Park could change the picture

The Šar Planina, located on the border between Macedonia, Kosovo and Albania, is one of the most important mountains in the Balkan peninsula. Rich in vegetation and wildlife, it is one of the homes to the critically endangered Balkan lynx (Lynx balcanicus), a subspecies of the Eurasian lynx. Also, there are areas harboring primeval tree stands of the endemic and relic Macedonian pine (Pinus peuce) and of the Bosnian pine (Pinus heldreichii). The great yellow gentian (Gentiana lutea), an endangered medicinal plant, can also be found on the mountain slopes. But, beside the material value, the mountain has also a huge non-material value. For centuries it is a motif in the traditional folk songs, which are sung not only in Macedonia but all over the Balkans. Unfortunately all this natural treasures remain vulnerable as Šar Planina is not protected as a Natural Park.

The Šar Planina belongs to the Scardo-Pindic mountain range. The ancient name of the mountain is Scardus. In some ancient books and maps it also appears as Scodrus, or Scordus. But, based on different sources, Scardus is the most commonly accepted ancient name for Šar Planina. This name later also reflected in the scientific terminology, when giving names to local endemic plant species (e.g. Anthyllis scardica, Crocus scardicus, Narthecium scardicum).

“The mountain range includes numerous peaks reaching over 2,000 meters, including twenty two peaks over 2,500 meters,” the mountaineering clubs from Tetovo emphasize. The highest peak of the whole range is Titov Vrv, located on the Macedonian side of the Šar Planina. It is 2,747, or 2,748 meters height, depending on the source.

The history of scientific research in the range dates back to the first half of XIX century, when French and German geologists and botanists visited the mountain. The region is rich in springs, rivers, waterfalls, glacial relief forms, glacial cirques as well as “39 glacial lakes (27 on the Macedonian side and 12 in Kosovo), either permanent or temporary, located at altitudes between 1,936 and 2,340 meters above the sea level,” it is said in the study conducted by United Nations Environment Programme (UNEP). Among all of them the biggest is the Bogovinjsko Lake. It is some 250 meters long and 210 wide, with the deepest depth at around 4 meters.

“The biodiversity value of this area is outstanding, due to the combination of both Balkan and Mediterranean characteristics determining the richness of its flora and fauna, including a large number of rare, endemic and endangered species,” says the UNEP study. The International Union for Conservation of Nature (IUCN) listed 32 plants on the red list of threatened plants as rare and endangered species of the common European and global importance. Amongst those rare, endemic and endangered species are the already mentioned Macedonian and Bosnian pine, the great yellow gentian, the Balkan Lynx and many more.

The Balkan Lynx is considered as a national symbol in Macedonia and appears on the five denar coin. In November 2015, the Balkan Lynx was listed on the IUCN Red List of Threatened Species as critically endangered. Although it is fully protected by the law, the total number of mature individuals is estimated to be less than 50. “The general and most serious threats to the Balkan Lynx population are its small population, a limited prey base, habitat degradation and poaching,” emphasizes the IUCN.

The Šar Planina as a National Park?

The first initiative for the protection of Šar Planina as National Park, second category according to the IUCN categorization of protected areas, dates from 1986. After the breakup of the Yugoslav federation, in 1991, the original initiative borne fruit. In 1993, the Kosovo part of the Šar Planina, which was then part of Serbia, was proclaimed a National Park. The first initiative for the protection of Šar Planina in independent Macedonia dates from 1997. It was rejected in the course of the public hearings carried out in 2000, even before entering in Parliamentary procedure, “most probably due to the lack of involvement of the local municipal authorities in the early planning phase, and due to a missing public awareness campaign, which together resulted in the lack of support by the local communities concerned,” it is said in the UNEP feasibility study.

Besides the preservation of the vegetation and of the wildlife, the legal protection could also be part of the solution to many burning issues for the locals from the near villages and the city of Tetovo. Landslides, floodings, lack of drinking water, air and land pollution, illegal logging, uncontrolled land development are only few amongst them. In August 2015, floods and land sliding in the mountain villages of Tetovo took six people, including kids. Illegal logging was pointed out as one of the main factors that resulted with this catastrophe. But regardless of all this, the Macedonian part of the mountain remains unprotected.

Fortunately, there is a glimpse of hope. A few non-governmental organizations from Tetovo and Tearce, together with the Macedonian Ecological Society (MES), united under the motto “Friends of Šara” are hoping to change the present status quo. The group, since September 2015, is collecting signatures advocating for the protection of the mountain as a national park. The project “Biodiversity conservation through sustainable management of resources” is partnered by EuroNatur Foundation from Germany, and financially supported by the German Federal Environmental Foundation.

“The natural values of the Šar Planina are so great, that the need of protection arose many years ago. Experts and researchers from the Republic of Macedonia claim that two thirds from the biodiversity that we have on the whole territory of the country is present on Šar Planina, thus the need for protection is paramount,” Frosina Pandurska-Dramikjanin, project coordinator from the Macedonian ecological society (MES), said.

MES, together with the local NGOs, in summer 2015 conducted a survey in six municipalities in order to hear the locals' opinion for proclaiming Šar Planina for National Park. The preliminary results shown that almost 80 percent of the local population would support this initiative.

“As we all know, the negative attitude comes from the fear that by forming this National Park people will be limited in using the resources, or in their movement on the mountain. The fear usually is connected with illegal activities, which for sure are present on this Mountain,” Pandurska-Dramikjanin said. This is the main challenge for the “Friends of Šara” and MES in the following years. “We will try through education and various activities to explain what people can do in National Park, and which activities will be restricted or controlled,” Pandurska-Dramikjanin said.

With the proclamation of Šar Planina as a National Park, many things will change, underlines the MES. All illegal activities as illegal logging, illegal hunt and overuse of non-wood forest products will be reduced and controlled. The erosion will be reduced, because the illegal cuts will be stopped, and measures for improvement of the forest will be undertaken. This will bring new possibilities for the development of eco and mountain tourism, and the protection of the future for many endangered species will be ensured.

Jovan Bozinoski, the president of the mountaineering club Ljuboten, says that the mountain tourism is in stagnation. “We have the basis for further advancement of the eco and mountain tourism, but in order to attract more tourists we need to prepare a strategy and start creating the adequate infrastructure and educate the local people. All we need is the support of the local municipalities and of the Government. Proclaiming Šar Planina as a National Park will definitely boost the tourism,” Bozinovski said.

The proclamation of Šar Planina as a National Park is the first step in a bigger and more important project - the transboundary protected area “Šar Planina – Korab – Dešat”. Starting from Kosovo, crossing through Macedonia and ending in Albania, this will become the largest protected area in South Eastern Europe, and one of the largest in the whole of Europe. The only puzzle that is missing is the Šar Planina. During the first Environment and Security Initiative (ENVSEC) workshop “Enhancing Trans-boundary Biodiversity in Mountains of South Eastern Europe”, organized by UNEP in Podgorica, Montenegro, in June 2006, representatives of the Governments of the region jointly identified eight potential transboundary protected areas: and selected three of them as “priority areas in focus”, perceived as most urgent from the biodiversity point of view. One of the three priority areas is the proposed transboundary protected area “Šar Planina – Korab – Dešat”

The feasibility study on establishing a transboundary protected area that was conducted by UNEP underlines that “the label of a ‘trilateral transboundary protected area of exceptional natural values and sustainable tourism development’ as well as of ‘the largest protected area in South-Eastern Europe’, and of ‘one of the largest protected areas in Europe’ could provide for the ‘unique selling point’ for the local or regional tourist packages, increase the tourist attractiveness of the region, facilitate the broad recognition of the region and marketing of the regional tourist product abroad, and help to mitigate the adverse effects of the negative stereotypes still common among some Europeans, resulting from the past armed ethnic conflicts.”

The Macedonian Ecological Society supports the idea of the transboundary protected area “Šar Planina – Korab – Dešat”. “We believe that the rich ethno and cultural diversity will be promoted and conserved. Tourists will travel from one side of the border to the other and will have a chance to meet unique cultures and a mix of religions, and tradition. On this mountain coexist Macedonian, Albanian, Turk, Macedonian muslims/Gorani, Serbs, making the story of the Šar Planina even more rich and valuable to share,” Pandurska-Dramikjanin said.