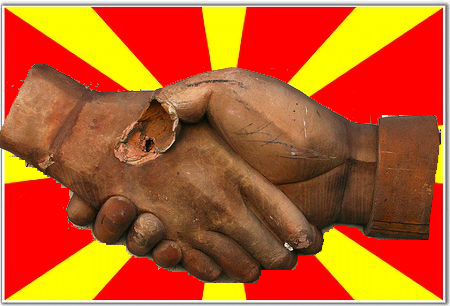 He's the only Macedonian politician who has been riding the crest of the wave since the '90s. Branko Crvenkovski seems to have reached his final challenge: the next local elections. He would do anything to win them, even shaking hands with former arch-enemies

On July 19th the leaders of two major opposition parties, Branko Crvenkovski from the Social-Democratic Alliance of Macedonia (SDSM) and Menduh Thaçi from the Democratic Party of the Albanians (DPA) announced their agreement for an election coalition for the local elections scheduled for the spring of 2013.

The media commented the deal as the first ever formal election coalition between an ethnic Albanian and an ethnic Macedonian party. Each Macedonian government is based on Macedonian-Albanian coalitions, but the partnerships are usually formed after the elections, based on the results of the vote. The coalition will be technical they said; the SDSM will not nominate candidates in municipalities with ethnic Albanian majorities, and vice-versa.

What has sparked most comments is the fact that Crvenkovski and Thaçi were bitter political enemies in the past. Their enmity has been mainly personal in nature. In Macedonian political reality coalitions between each Macedonian and each Albanian party are in fact a fact of life.

“We exchanged heavy words in the past” said Thaçi when announcing the new partnership, “but, when fierce opponents as ourselves put their differences aside, you have an indication of the dire straits this government has brought to the people”. The two leaders said they had shared views on the democratic regression, the awful economic situation, and the international isolation of the country.

The agreement is the latest development of SDSM’s “working summer”, an unusually early start of a campaign for elections which will take place an are entire eight months away. The Social-Democrats have been zealously touring the country campaigning that the forthcoming elections are more than just a local vote. According to Crvenkovski, two-times Prime Minister and one-time President, the elections will also represent a referendum on the national government.

Reconciliation with Thaçi may have brought out comments but it was nothing compared to what Crvenkovski had done a few weeks earlier. At end June he shook hands over an election partnership with his old arch-rival Ljupco Georgievski, former leader of the currently ruling VMRO DPMNE, and one-time Prime Minister (1998-2002), at present leader of the small right-wing VMRO – People’s Party, one of the many splinters from the VMRO DPMNE.

Their antagonism was a dominant feature of Macedonian politics in the 90s. The public still remembers their fiery duels which were sometimes likened to box matches. Highlights were again evoked for the occasion: at one public duel in the late 90s Georgievski accused Crvenkovski of snorting cocaine, leaving him speechless; at the “re-match” Georgievski went for the same point but Crvenkovski was ready and accused him of mental instability and related violent episodes.

Such political duels are a relic from the past in the present political life of Macedonia. Prime Minister Nikola Gruevski is known for avoiding political debates with his opponents, and even with journalists. He mostly goes public on government friendly shows with pre-prepared questions which are often akin to eulogies.

Returning to the past, Georgievski succeeded in beating Crvenkovski and taking office in a historic election in 1998 which marked the first change of power in independent Macedonia. After the end of his term he quickly lost political footing, first through his unsuccessful attempt to return to the helm of the VMRO DPMNE which he had handed over (he thought temporarily) to his - at that time - protégé, Gruevski, and second, by taking Bulgarian citizenship, which caused a huge scandal and effectively ended his political career.

Of course it is true that politics is the art of the practical, but the Crvenkovski – Georgievski June deal was something very unusual, even by Macedonian standards. “One photo speaks a thousand words” commented Prime Minister Gruevski cynically.

Crvenkovski tried to abate the shock by recalling that despite being bitter opponents, he and Georgievski also cooperated in the past: during the 2001 conflict, or much earlier when adopting the first constitution in 1991. Still, the whole thing was odd.

Not only for merging what was once black and white, but also because of the apparent disparity. Crvenkovski, a political machine who rarely makes mistakes, has had a much greater political longevity than Georgievski. He is still the leader of the major opposition party in the country. Georgievski, on the other hand, seems to have expired. He has had several comeback attempts without much success. So the question remains: what can Crvenkovski possibly gain by coalescing with Georgievski?

The last shot in the barrel

The answer is probably to be found in Crvenkovski’s political endurance itself, which is not painless. He has been at the forefront of Macedonian politics practically since independence. He has won all there is to win. By any standard he has been an enormously successful politician. But he carries with him heavy baggage from the painful transition, and, besides, he is reaching the sunset of his possible years in service.

However, he does not seem to feel that way. He has held a firm grip on his party for the past 18 years, even though he temporarily stepped down when he was elected President, on account of constitutional restrictions. During that time he managed to keep several strong potential successors in check: Vlado Buckovski after his short stint as Prime Minister and the fallout with Crvenkovski was practically ousted; Radmila Shekerinska stepped down after losing the 2008 national elections, even though she is still a possible heir.

Crvenkovski is the only remaining leader from the political elite of the 90s. The VMRO DPMNE went through a leadership change; the DPA did the same when Thaçi replaced Arben Xhaferi. The Ruling Democratic Union for Integration (DUI) only emerged after the conflict of 2001.

Crvenkovski almost managed to get rid of Gruevski with an early national vote last year. He strengthened the SDSM's base in parliament and weakened Gruevski’s majority but he did not manage to oust him. The SDSM remains in opposition; anaemic, idea-less, unable to produce a convincing political programme. It is SDSM’s weakness that is partly to blame for VMRO’s growing authoritarianism.

It is here that the reason for the recent coalitions should be sought. Crvenkovski has, most likely, only one shot left. And he probably knows it. If he looses the local vote next year he will most probably have to step down. So he has launched his campaign a year ahead of time, has put his pride and ego aside and has started to make calls to old foes building a broad coalition for the opposition. The problem is that some of his moves really look desperate, such as his 'peace' with Georgievski. So desperate that it might be counterproductive.

At the end of the day, however, what can be seen is a symptom of SDSM's internal weakness. In close to two decades the main centre-left party in the Macedonian block and a major cornerstone of the political system in the country has not succeeded in producing an internal democratic change. This is dragging the SDSM down and also has effects beyond the party itself and on the whole country. Crvenkovski may as well pull it off and win the local vote. But that will not be due to the SDSM's strength but to the VMRO-DPMNE's declining support.