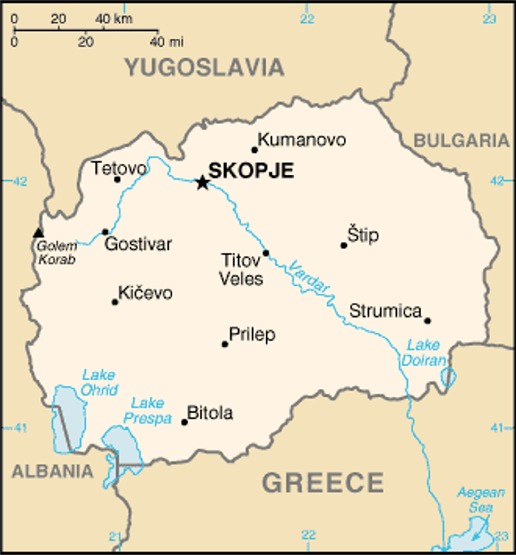 Since 1991, when declared its independence under the name "Republic of Macedonia", the young Balkan state has been struggling with Greece, which claims the name cannot be used, sinche is essential part of his historical heritage. After almost 15 years, the dispute is still unresolved

Greece said - the new country cannot use the name Macedonia because it is Greek. It is the name of its northern province of Macedonia, and it is part of history that is essentially Greek. It claimed that by using the name, the new country expresses territorial aspirations to Greek land. Almost immediately after the adoption of its new constitution Macedonia had as a result of Greek and international pressure to insert an amendment expressly reading that it does not have any territorial aspirations.

The new state was recognized by the UN on 8 April 1993, due to the Greek objections, under a temporary name of "former Yugoslav Republic of Macedonia (FYROM)"

Later in 1993, as a sign of revolt with the newly adopted Macedonian flag, an old Vergina (ancient city) star - Greece lifted a complete economic embargo against Macedonia. In other words - it completely closed the border. The relations between the two countries were frozen. In 1995, as a result of international lobbying and intense negotiations, Macedonia agreed to change the flag and Greece lifted the embargo. On 14 September 2005 the two countries signed a temporary bilateral accord to untie relations and to start negotiations over their differences concerning the name.

Ten years later these negotiations are still on.

In the meantime over 100 countries had recognized Macedonia under its constitutional name, to Greece's great resentment, including 3 permanent members of the UN Security Council - China, Russia, and most recently the US.

Despite the disagreement over the name, the economic relations between the two countries have been regularly improving and Greece is today the single largest investor in Macedonia.

The dispute is remembered as one of the strangest ever in contemporary international relations.

"I am quite certain that even back then a large number of the members of the UN couldn't understand that one can contest the name of a people who has created a state on the territory it has populated for centuries", reminisced first Macedonia President, Kiro Gligorov earlier this year on the 10th anniversary of the recognition by the UN, for MIA.

Still, disagreements exist because parties see things with essentially different eyes. Reiterating that Greece wants European future for Macedonia more than anybody else, Elsa Papadimitriou, chief of the Greek delegation at the Council of Europe, says:

"I swear to you, I guarantee that Macedonia as a name is charged with Greek history and there is no Greek among my electors, my colleagues, that can give this name to a nation whose settlers had come here in the 6th or 7th century. It is impossible and unacceptable."

Over the years it became clear that time worked for Macedonia in the dispute. More and more individual countries opted to recognize and to address Macedonia by its constitutional name, as opposed to the FYROM reference.

The biggest blow to the Greek side came last November, when ahead of a controversial referendum that could have destabilized the country, the US recognized Macedonia under its real name. Rightly, they assessed that it was the positive boost the small country needed back then. Experts said that this recognition de facto closed the issue - with the fact of 3 Security Council members having done it.

Still, Macedonia fears Greece will use its influence in the EU and impede or condition its integration prospects. End August, angered by the Polish recognition of Macedonia by its real name, the Greek Prime Minister, Kostas Karamanlis stated that Greece will block Macedonia in the EU.

EU officials keep to the boilerplate that the name issue is of bilateral character and handled under the UN mandate.

"The EU membership application and the name dispute are two different things. We have always been clear, and we say this as holders of the EU presidency, that the name dispute is not an obstacle for the country to become a member" said during a recent visit to Skopje Douglas Alexander, the UK Minister for Europe.

Still, the EU has 25 members, and everybody has an opinion. Aristotle Tziampiris, professor in international relations and author of 3 books on the Greek - Macedonian relation says that "it is important to see what happens in this coming November when the European Commission opinion is due."

"It can be "yes", but it can also be yes with certain conditions for the country. That opinion goes in the Council of Ministers and it is the Council that actually makes the decision" says Tziampiris.

He says that "after all these years of negotiations a solution must be found and there must be a compromise". According to him, eventual act of recognition of the constitutional name by Athens would perhaps not cause as frenzied a reaction as 10 years ago in Greece, but it would definitely cause a political crisis.

"Still, we in Greece are extremely sensitive to the issues that concern ancient Macedonia. I was for example very surprised when I saw here in Skopje vine by the name of "Bukefal" (after "Buchephalus" - the war horse of Alexandre the Great). It is difficult for any Greek...to find any connection between ancient Macedonia and you." explains Tsiampiris.

In 1996 Greece halted a plane of the Macedonian company "Pal Air Macedonia" at the island of Corfu and repainted its logo on account of it being offensive for the Greek national feeling. Just this month panic was raised in Skopje over the exports of the local produce to the EU, as the use of the logo "MKD" for a short while seemed refuted by the Greek side.

There must definitely be a solution and also not before too long. The economic cooperation has been good and in a way indicative of how the politics we do is no always in our best interest. There must be a compromise, says Tziampiris. Macedonia feels it has no room to compromise, Greece feels it has already made important concessions.

As irrational as it may seem, this issue has been a serious constraint to Macedonia throughout its short independent existence. It resulted with delayed international recognition, delayed and hindered integration. It encumbers its position in international relations as counterparts are often put in a position to choose between friendship with Macedonia or Greece.

Identity still very much looms large as in issue in the Balkans, though it may seem as old-fashioned in the rest of Europe