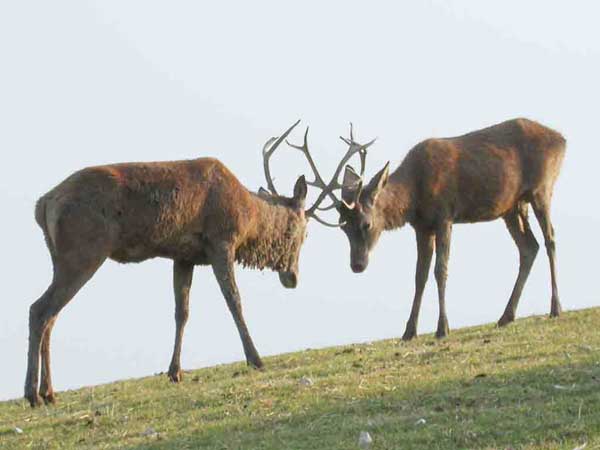 As time to the NATO summit in Bucharest closes in the 16-years long dispute between the Republic of Macedonia and Greece over the name "Macedonia" is entering a critical phase. Both sides increase speed, but without compromise, the crash seems inevitable

The 16-years long dispute between the Republic of Macedonia and Greece over the name "Macedonia" is entering a critical phase.

Macedonia is expected to be invited to join NATO, together with two other countries from the Adriatic group, Croatia and Albania, at NATO's Bucharest summit in April of next year. The North Atlantic Alliance's expansion with these countries is vital ahead of the critical times coming for Kosovo's final status.

However, Macedonia's accession in NATO is challenged by Greece, which threatens to use its right to veto if a compromise on the name issue is not found by the time of the Bucharest summit.

The name dispute between the two neighbors has been lingering for the past 16 years , practically ever since Macedonia's independence in late 1991, and it has seriously impeded Macedonia's international integration. Because of Greek opposition, Macedonia was received in the UN in 1993 under the "temporary" reference "former Yugoslav Republic of Macedonia". With the renaming of the former "Federal Republic of Yugoslavia" into "Serbia and Montenegro", before Montenegro eventually seceded last year, Macedonia remained the last part of the former socialist federation to carry the name "Yugoslav".

After 18 months of a Greek embargo, installed in February of 1994, which caused estimated economic losses of USD 2 billion to the new country, Macedonia and Greece signed a treaty in September of 1995, committing to find a mutually agreeable solution to the problem. Negotiations have been underway ever since in the UN, without much sign of progress. In the meantime, 120 of the UN member states (but no EU country) and three permanent members of the UN Security Council (Russia, China, and most recently the US) have recognized Macedonia by its constitutional name. At the time of the US recognition of Macedonia's name, in late 2004, which meant majority in the UN Security Council in Macedonia's favor, experts declared the dispute "de facto" over.

From today's point of view things do not look that clear.

For a long time Greece has been implying it could veto Macedonia's joining of NATO and the EU, would compromise not be found. Such behavior does not make Greece popular internationally. Most countries do not care about the issue; many feel that Greece's ultimatums towards the much smaller northern neighbor are unjustifiable. However Greece has been demonstrating that there is no length it won't go to have things its way. In the last weeks the Hellenic Republic, which is otherwise a traditional friend of Serbia, even changed its view on Kosovo's possible independence in exchange for EU's "understanding" in its dispute with Macedonia. It simply silenced its view that Kosovo independence cannot be imposed on Serbia.

As time to the NATO summit closes in, Greece is making it clear to everyone it won't let Macedonia in unless the name issue solved. This runs counter to NATO interests, as the Alliance wants the countries from the Adriatic group in, and it also directly spites the US . The US wants Macedonia inside NATO and is its strongest supporter in the process. Fragile Macedonia inside the Alliance would mean an additional buffer of safety when the time comes to deal with the boiling Kosovar potato. Kosovoe has been procrastinated long enough, and it is by now very clear that any additional delay is risk to regional security. Therefore, by all accounts the first half of 2008 will be marked by Kosovo.

And while the US applies pressure to secure an invitation for Macedonia at the summit, by saying that the name issue is a bilateral one and it cannot possibly be a condition for entry, Greece has been running an intensive diplomatic offensive, trying to secure allies for the forthcoming period.

So far the success of this has been mixed. Its request for a clause stipulating the need of closing open issues with neighbors as a condition for entry, was denied at a NATO ministerial conference early December. Reportedly, Germany stood against it saying that the "additional vocabulary" did not conform to the Alliance's approach to the members of the Adriatic group.

However, Greece managed to have the issue referenced in the conclusions of the ministerial meeting of the European Council last week. The Council's conclusions note that there is still no solution to the name issue and they call upon Macedonia for renewed efforts and constructive approach. The issue was also mentioned in the Commission's annual report on Macedonia, although it did not make it to last weekends EU Summit.

As much as Greece looses points internationally with its insistence on the issue, pressure has also been mounting on Macedonia by all sides to find a solution. By foes and allies alike. US Under Secretary of State Nicolas Burns told Macedonia Foreign Minister Antonio Milosovski earlier this month that "the prime minister and the Macedonian government need to show greater sensitivity to Greek public opinion and government". Especially, given some recent "unnecessarily provocative actions" by the Macedonian side, meaning the renaming of the Skopje airport into "Alexandar the Great", and similar. European officials and analysts also called that move an unnecessary provocation. It also gave Greece the opportunity to yell fault and argue that Macedonia does not respect the 1995 agreement which calls on the parties to refrain from provocative moves.

Prime Minister Nikola Gruevski admitted last week that he is under tremendous strain to compromise over the name.

"I have repeatedly been told, in quite open manner, that we are expected to find a compromise with Greece, and have even been suggested names: "New Macedonia", "Republic of Macedonia - Skopje", "Upper Macedonia", Northern Macedonia". It has always happened in private meetings, although with highest level foreign officials", said prime minister Gruevski.

The latest bid took place at last week's meeting of people's parties in Brussels. As reported by Macedonian press, at a mention of the issue by the chairman Wilfred Martens, former first minister of Belgium, Greek Prime Minister Kostas Karamanlis took the floor and during his intervention offered Mr. Gruevski the name "New Macedonia". In Greece's view, this is a huge concession, as it actually agrees on having the word "Macedonia" in the name of the country. In the past, Greece vehemently rejected even the thought of that. Mr. Gruevski, reportedly, declined. He said to domestic press that the episode was of marginal importance and that "there was nothing more than a mention" of the dispute. Nothing special, he said. The event was confirmed to Macedonian reporters also by Ivo Sanader, former prime minister (and currently a candidate prime minister) of Croatia.

"It would be a shame if Macedonia missed this chance to enter NATO, because of the name issue ", said Mr. Sanader.

For the time being, both sides increase speed, but without any repprochement in their positions. The crash seems inevitable.