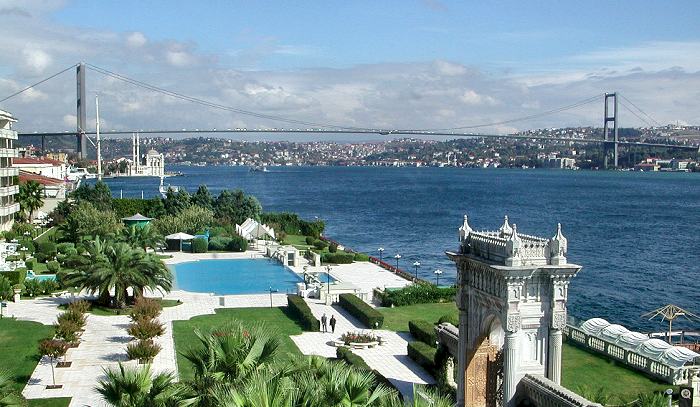 The bridge on the Bosphorus

The December 2004 Summit of the EU was marked by the historic decision to commence membership negotiations with Turkey; still the timeline implied for their completion goes quite beyond 2012. How about Macedonia then? When can she expect to join?

In May of last year the director of the Brussels based European Policy Centre, Fraser Cameron produced an analysis titled "Where Does Europe End" foreseeing, among other, that Macedonia and Turkey will become EU members in the same year - 2012, together with Switzerland. According to the same forecast, Croatia would enter, together with Norway and Island in 2009. Serbia and Montenegro, Bosnia and Herzegovina, Albania and Kosovo could not hope of entering before 2020.

The December 2004 Summit of the EU was marked by the historic decision to commence membership negotiations with Turkey; still the timeline implied for their completion goes quite beyond 2012. How about Macedonia then? When can she expect to join?

Same last December, while speaking before the Chatham House in London (formerly Royal Institute for International Affairs), Erhard Busek, the Stability Pact Special Coordinator for Southeast Europe said that no one in the EU now knew what were the true European perspectives of the Balkan countries. Busek commented that the euroskepticism and the difficult task of the enlargement had pushed the Balkans down on the list of priorities. A month earlier, in an interview for the Austrian news agency APA he stated that Croatia and Macedonia would be ready for membership before Turkey, though Macedonia was lagging quite a lot behind Croatia. Busek further underscored that an atmosphere of competition between Turkey and the Balkans should be avoided.

For the time being at least, there are no negative feelings in Macedonia over the "Turkish enlargement". Nor would right now seem feasible to expect them in a foreseeable future. Turkey is not seen as a direct competitor. For one, Macedonia and Turkey are two very different countries, it is not like Macedonia can aspire to compete with Turkey in any way; secondly, present relations between Macedonia and Turkey are correct and friendly. Turkey was one of the first countries to recognize Macedonia by its real name, and had always extended support in difficult moments. One thing that the two countries have in common - is problems with the same neighbor, Greece.

The same can not be said about the feelings for the other countries adjoining, Romania and Bulgaria. The word that would well describe the feelings of the common Macedonian over the fact that the Romanians and the Bulgarians would join in 2007 is- incomprehension. Macedonians cannot understand how come these two peoples who were always poorer and worse off are all of a sudden ahead. They are seen, still not as direct competitors but as someone who benefits not on grounds of merit but "higher interests". Along the same discourse the EU is sometimes seen as unfair and arbitrary. This is the position of resignation of someone who had lost historic positions of favor. Macedonia appears not to be able to fully comprehend its faults. Still, this does not dilute the ultimate and widespread desire to one day join. Citizens of Macedonia equate the EU with economic prosperity, with the possibility to travel now so much denied, with politicians who are less corrupt, with safety and normality. It is in one word, the ultimate political aspiration.

The EU Summit's decision on Turkey, contentious as it was, for sure opens a new chapter of perplex analysis. "In a final run what matters is how much we do to improve our prospects", said recently the Macedonian Vice Prime Minister for EU Integration, Radmila Sekerinska in her weekly column for daily Dnevnik, "however, the decision on Turkey will influence public opinion in the Member States and it will create a completely new context".

According to Sekerinska there are both good and bad sides to the new situation. For one, she says, the Commission insists on common rules for all. If it accepts that Turkey had met the political conditions for membership, a fact confirmed by the decision to start negotiations, it would be difficult to deny that status to Macedonia. Further, the price of admitting Turkey is absolutely incomparable to the one for Macedonia, and the other Balkan states. If the EU accepts the bill for Turkey, the argument of lacking funds would become obsolete. Sekerinska further contemplates that in geo-strategic terms taking Turkey in and putting a foothold in Asia without having the Balkans solved, doesn't make sense.

Trying to ponder the potential negative aspects, Sekerinska reckons with the possible increased anti-enlargement sentiment of the factors within the EU itself which were disappointed with the decision on Turkey and with the eventual declined importance of the too big a future Europe which could lose cohesion and turn into a regional UN or a new OECD, as sometimes cynically pointed out by some. She concludes that Macedonia should continue to promote its added value - being a stabilized multiethnic society in a highly volatile multiethnic surrounding. To play the card of being a stability factor that is. This is a tune we have heard before. Macedonian politicians had been singing it long before the conflict of 2001. It only seems like they are resuming it a bit too soon. It would be quite sad if they really believe it. The recent situation with the militant group that had occupied the village of Kondovo showed how fragile to political and security crisis Macedonia actually is.