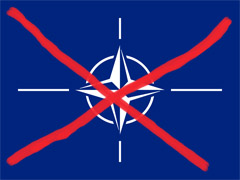 It finally did happen. Greece vetoed Macedonia's invitation to join the Alliance at NATO's last week Bucharest summit. The hum of frantic diplomatic activity over the last months ended in a single tone of bitterness

It finally did happen. Greece vetoed Macedonia's invitation to join the Alliance at NATO's last week Bucharest summit. The hum of frantic diplomatic activity over the last months ended in a single tone of bitterness.

There was hope in Macedonia until the very last moment that strong pressure by the United States could force Greece to give up the veto, but it didn't happen. Macedonia stayed out in the cold. What would be the political consequences of this fiasco for Skopje is for the time being still unknown.

The awareness which reemerges as clear as ever is that Greece is a serious threat for Macedonia. It delayed the country's recognition by the UN in the early 1990s. It imposed an embargo in 1994 which cost Macedonia billions. It now kept Skopje out of NATO.

If Greece could so easily defy the United States in the North Atlantic club, one should not doubt its readiness to go to any length when it comes to Macedonia's accession into the EU.

Greece justified its action by blaming Macedonia. Athens has been accusing Skopje of intransigence over the last period. It kept saying that whereas Greece had made concessions, Skopje had not. However, it was apparent that Skopje was more or less ready, or it could have been arm-twisted, into accepting most of the "adjectives" on the table in the several rounds of talks in the run up to NATO. This was not enough for Greece. What Greece wants is likely something that no Macedonian is ready to concede.

The good news in the aftermath of NATO is that the invitation is in a sort of a standby "pending" resolution of the name dispute This means Macedonia does not have to wait years until some next NATO enlargement summit. The moment the issue would be solved, the invitation should be extended by automatism.

The other good news is that the United States declared it would offer special security arrangements to Macedonia. This of course can not be seen as a replacement to NATO but it is nevertheless a clear message to incurable national-romantics and dreamers of grand lands and histories, a breed that dies hard in the Balkans, and perhaps even harder in its EU integrated parts.

The bad news is that Europe is by and large indifferent, or unable to react at best. Nobody really stood up to Greece in Bucharest although most EU countries silently disagree with it, and all of them must know what Macedonia means to regional security.

Just a few EU countries took Macedonia's side, among them perhaps most vocal Slovenia. Italy seemed pro-Greece, then it declared itself neutral. Outgoing Prime Minister Romano Prodi denied news report he had supported the veto. Germany said it supported both Skopje and Athens, that is to say, stayed neutral. France exercised fancy real-politic. President Nikola Sarkozy supported Greece. Perhaps because of lack of other arguments or information on the issue, he even humorously justified his support with the fact of his grandfather being Greek.

Even the countries that nominally supported Macedonia's position, such as the UK, did not do much to oppose Greece. A sobering lesson in the reality of international politics, especially for a small country whose ultimate goal is to join the EU.

Back at home after the initial gloom of end - last week, things actually seem rather better than one could have expected. "The sun still shines" remarked professor Ferid Muhic, a philosopher. The stock exchange quickly recovered after the bad news.

Media reported heightened boykott of Greek businesses, yet big Greek owned Vero supermarkets seemed crowded as usual. Travel agents reported a decline in interest for Greek destinations ahead of the Easter and May holidays. A Greek businessman's car was vandalized in Skopje over the weekend.

Gratitude to the United States looms large. Akin to a small, homeless boy, Macedonia has for the first time felt a strong protector by its side. The Mayor of Skopje, Mr. Trifun Kostovski announced plans to name the city park after President George Bush. "It is about time we learned how to show gratitude", said he.

The full effect of the Greek veto is only yet to be seen. One fear was that failure to integrate into NATO could cause a crack in relations between the two major communities, Macedonians and Albanians. Arguably, Albanians are less passionate than the Macedonians on the name issue.

If the Macedonian political camp would choose to stray from Euro-Atlantic integration to protect the name, Albanians would disagree, and that could be an intro to a serious political crisis.

Yet, for the time being Albanian political parties have been playing a constructive and supportive role and have been earning the gratitude of Macedonians.

The impression is that Macedonia would be willing to continue the process of negotiations. Several senior political leaders stated that the country should keep its commitment to the process and that prompt solution was a priority.

However, voices from the expert community suggested that Macedonia should stop the negotiations and take action before the International Court of Justice.

"Greece acted in clear breach of the interim accord of 1995", suggested Mr. Risto Nikovski, a senior diplomat. With that agreement Greece explicitly waved its right to veto Macedonia's entry into international organizations, says he. According to him, this argument should have been used more forcefully a the summit.

"Small countries have no other choice but to stick by the law" says professor of international law Ljubomir Frckoski, suggesting Macedonia should take legal action at The Hague.

The Prime Minister and the President are just back from Croatia where they met with US President George Bush, and they have not yet gone public. It will take some time to regroup and move on.

"In times like this we should not rush into decisions. We should let emotions subside first", said Prime Minister Nikola Gruevski.

There is already some talk of early elections. If that happens, and one should hope not, they could not possibly be spared the radicalized nationalist rhetoric. And this time it would not be inward oriented. Some rightfully fear Macedonia could grow cold about the EU. Brussels issued a statement calling upon Macedonia to stay on course.

The April sun maybe shining, but politically Macedonia is looking to rainy days ahead.