Carnivals in Macedonia: Between Paganism and Modernity 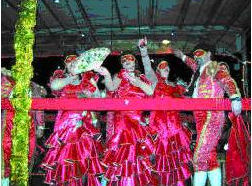 Many towns and villages in Macedonia maintain carnival festivities, but two of them are particularly important - Vevcani and Strumica. It is said that the Vevcani carnival is as much as 1.400 years old, the one in Strumica is more recent but much bigger, and festivities last for 5 days

"I arrived to a town spread down the hills and I saw that night people under masks running from a house to another, laughing, screaming, and singing".

This is how a famous Turkish travel writer Evlija Celebija described the carnival in Strumica some 400 years ago.

Many towns and villages in Macedonia maintain carnival festivities, but two of them are particularly important - Vevcani and Strumica.

If you ask people from Vevcani, a village in Eastern Macedonia, near the city of Struga, where do they live - they will answer - in an independent state. Half in joke but half serious they declared their village to be - the Republic of Vevcani some years ago; have been printing their own passports, as a very peculiar souvenir; hadn't hesitated to oppose central authority over matters of local importance when needed. In one word - they have always cherished a very particular sense of local identity and uniqueness, perhaps best conveyed through their celebrated carnival.

It is claimed by the locals from Vevcani that their carnival is as much as 1.400 years old. At least this is how it is often described by the media. It has pagan routs and it is interwoven in Christian traditions. It takes place on the day of Saint Vasilie the Great, on 13 of January, which by the old calendar marks the beginning of the new year. It aims to drive away the evil spirits and invite a good and fruitful year.

Also this year, the carnival ran under the patronage of the Ministry of Culture and it was declared open by minister Blagoja Stefanovski according to whom the "Vevcani open theatre combines authentic traditions with modernity and successfully continues its centuries of existence".

The carnival always features 4 main masks which have a special role, "The Bride and Groom", "The Musicians", "August the Stupid", and "The Devils". Apart from these, all the other masks are prepared in secrecy and are not discussed prior to the event. In this way, nobody knows who is who during the main festivities. The carnival takes place throughout the village and the traditions says that all houses are open to everybody during the 2 days of celebration. When guests come to a house they do not speak, as this makes it more difficult for the host to discover their real identity. Once identified, they can take off their masks.

Women do not take part in the official program, but unlike in the past, they do mask themselves and keep the masks on till the very end of the festivity.

What makes the carnival in Vevcani different from many other carnivals is its spontaneity and reliance on improvisation, without much prior scenario. Next to the old spooky masks made of animal skin, which acquire primordial demonic quality with the fall of night, the streets of Vevcani are filled with individual masks or group exhibitions which reflect on and usually ridicule socio-economic and political realities. Thus a donkey cart presents Macedonia's walk towards the EU, politicians with parachutes depict the inconsistency of political affiliation - as politicians go where the wind blows them; a medical team of bird flu specialists runs around. Major political figures always recognize themselves in the sarcastic messages conveyed during the Vevcani carnival.

Unlike other carnivals that are not more than well organized festivals, the one in Vevcani is a collective trance that completely consumes the entire community and equally the many visitors.

The carnival in Strumica is more recent but much bigger, due to the size of the city, and festivities last for 5 days. It has been gaining increasing visibility over the last years due to effective marketing, and gradually has been acquiring international dimensions.

This year it featured masks and teams from the neighboring countries, such as Serbia and Montenegro, Croatia, Bulgaria, Slovenia, but also from far away places.

Ferdinand van der Kron, the president of the International Carnival Cities Association, says that this year's festival, which just took place in the second week of March, was the best one ever.

"It was magnificent. Strumica really has a great carnival, in European terms. My fantastic compliments", said he.

The main festivity started with spectacular fireworks and some 3.000 masks paraded in the main streets of Strumica.

The cold weather and snow didn't prevent the locals and the thousands of visitors to stay and have fun till the end, including the president Branko Crvenkovski, several government ministers, and members of the diplomatic community in the country.

Organizers were content. They say that Strumica lives for the carnival.

From the demonic chill of the dark streets of Vevcani to the party-till-dawn urban festivities in Strumica, Macedonian carnivals stem from their pagan roots and interweave with the rhythm of modernity.