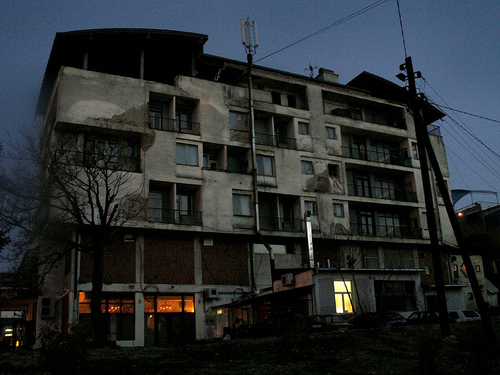 Monospitovo is a village in the region of Strumica in the eastern part of the country. Known for its green house gardening. Over the last several years 50-60 families per year have been migrating, most of them to Italy

There is no institution in Macedonia that will inform with statistical accuracy on the size of the migration out of the country. The only conclusion, occasionally reported by the media is that - it is huge.

Macedonia has always been a country of immigrants. Entire regions of the country have been known as migrant. The local folklore, music, and literature have immortalized the myth of the "pecalba" (economic migration), the melancholy for the homeland, the lives spent far from the family and loved ones. The Macedonian diaspora abroad is often estimated to 700.000 people. The largest communities are to be found in Australia, the US, and Canada.

Transition has set off a new last wave of migration. According to media reports, a wave far more massive and intense than any previous one in history. Yet government data is lacking. Authorities do not know the number of people leaving abroad, many of them not to return. The only time they grasp the situation is in election times, when they realize that the voters on their lists do not exist in reality.

Traditionally it was regions with poorer conditions for agriculture which fed the migrant outflow. Today, it is also regions rich with land that loose their people.

Monospitovo is a village in the region of Strumica in the eastern part of the country. Known for its green house gardening, it used to make a very good living from farming. Today, agriculture doesn't patch up a living. The work is hard as ever but the revenue has depleted tenfold. Over the last several years 50-60 families per year have been migrating, most of them to Italy. Many have gone to the region of Piacenza. There are so many people from Strumica in Piacenza, that they call it in a joke - Strumicenza. Many of them are not planning to return. On the contrary, they are trying to bring there their relatives and friends.

According to some estimates, circa 5.000 Macedonian citizens migrate to Italy each year. Other numbers estimate with a total number of close to 50.000 people with Macedonian citizenship in Italy. Although it has been gradually restricting its policy on migration, Italy is still the most flexible country in Europe when it comes to illegal aliens.

With the possibility of entering it legally becoming smaller and smaller, migrants from Macedonia have two options: get a Bulgarian passport (for ethnic Macedonians) or cross the border illegally.
Getting a Bulgarian passport has become an incredible trend over the past several years. Again precise numbers do not exist. Estimates go up to 15.000 people who have obtained it over the last 4 years. According to other calculations, some 50.000 Macedonian citizens are queuing for the Bulgarian visa-free travel document. All one needs to do is to sign a piece of paper acknowledging his/her Bulgarian ethnic origin. Pressed by economic urgencies people do not tend to think much about national pride. It is not like someone can blame them.

The other option is - cross the border by night. News of smuggling of migrants and its more horrid look-alike, trafficking in persons, have been filling the press in the last years. Last year two young Macedonian Albanians died from poisonous gases while hidden in a secret bunker of a track, trying to be smuggled into Italy via the port of Bari. Similar news often report of police raids against traffickers' rings which can easily smuggle up to a few hundred people a month. Last year Slovenian police cracked down such a ring, the leader of which was a Macedonian citizen. Migrants pay around 1.000 euro to be smuggled into Italy. Once there, they hope for a helping hand from a friend or relative.

In absence of numbers of emigrants, there are other indirect indicators of what is going on. Agencies which facilitate employment abroad get up to 20.000 applications a year. Most applicants are between 22 and 35 years old.

There is a lot of fraud too. Earlier this year a woman from Strumica was indicted for defrauding several people of 1.000 euro each on the promise she would get them visas for Italy. This is the third such case of fraud in the region of Strumica in the last three years. Up to 200 people have been conned in this way.

Another indicator is the declining number of kids enrolling in school, and the smaller and smaller number of births. A decade ago, Tetovo, a city in a region with still the highest natural growth in the country, had 3.000 birth a year. At present it has 10% less.

Reports by daily "Utrinski vesnik" from Debarska Zupa, Drimkol, the villages from around Strumica, Vinica, and Makedonska Kamenica, have testified to large parts of the population having migrated to Italy. The villages are left with few elderly to look after the houses, in a vain hope, that one day, the young ones would return. Migration has been the strongest in the region of Zupa which has lost 68% of its population over the last decade.

There are regions in the country where the possibility of employment is zero. A factory which has supported a bigger town, and a few surrounding villages, after the socialist model of the factory-town (each town should have one big factory to support it), has collapsed, and the entire population from that region immediately stays jobless. Those who can run away, do it. Young go for baby-sitters abroad, mostly the women. That leaves entire villages with the young male population without the prospect of marriage. So pronounced is this problem that a village near Bitola last year came up with a rather unique project to import young brides from Ukraine. And they implemented it.

In addition to Piacenza, bigger Macedonian communities are reported in Treviso, around Venice, Asti and Canelli.

Remittances from migration are huge. According to some modest numbers, over 100 million euro per year. It is no secret that there are entire villages that survive only on remittances. Yet that is a poor tradeoff. Macedonia is loosing its young people. Perhaps irretrievably.