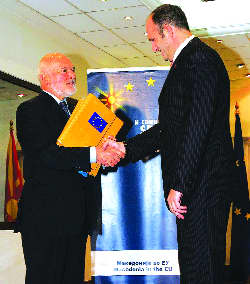 On 9 November 2005, 19 months after the Macedonian government submitted the application for membership, and 9 months after the submission of the EU questionnaire to Brussels, the EU issued an opinion recommending candidate status for Macedonia

"Today is the day when the question whether Macedonia will become an EU member is being closed. The answer is - Yes. Now the question is - when will this happen, and the answer is up to us", stated Prime Minister Vlado Buckovski this 9 November following the EU decision to award candidate status to the country.

On 9 November 2005, 19 months after the Macedonian government submitted the application for membership, and 9 months after the submission of the EU questionnaire to Brussels, the EU issued an opinion recommending candidate status for Macedonia. This will be confirmed at the EU summit on next December 15.

An anonymous diplomat from Brussels was quoted by BBC saying that the positive answer to Macedonia's application is a "politically incredibly positive story, having in mind that not so long ago the country was at a verge of a civil war".

The Commission's opinion does not mention a date for start of negotiations and according to some it is unlikely that this will happen in the next year. The EC will issue its opinion on Macedonia's progress next fall and it is possible that some timeline is mentioned then. Experts say it will very much hinge on regularity and fairness of the next elections in 2006. Bottom line - quite everybody agrees that it will depend on the progress with the reforms the country makes.

Enlargement Commissioner Olli Rehn came to Skopje in person to deliver the message. He took part in the Government's session, met the President, spoke before the Parliament and met the press.

"The beginning of the negotiations with the EU will depend on the speed of the reforms. We are not interested only in declarations and talk but in action and implementation of real reforms on the ground" said Rehn.

Asked if by the end of 2006 the country could get a date for start of talks Rehn said "I am not a proponent of deadlines, especially not over such serious issues as the opening of the negotiations.

In the same tone, the new EU Ambassador to Macedonia Ervan Fuere commented that "We all like to speculate, but it is important to underscore that the date of negotiations is no something which should turn into an obsession".

Metaphors embellished the solemnity of the moment. Following Mr. Buckovski's comparison of the EC opinion with a "one way ticket", Mr. Rehn said that "the next step is to choose the right track and good fuel."

"The reforms lie on you, whether you want to take the high speed Eurostar or a slow local train". said he.

The part of the Commission's opinion on political criteria reads that Macedonia has stable democratic institutions, but that the 2005 local elections displayed serious irregularities. The Government should continue with the implementation of the Ohrid Framework Agreement which is highlighted as the country's major achievement today. The rule of law must improve, and the very high level of corruption is a serious concern.

Mr. Rehn used his address to Parliament to lobby for stepping up with the judicial reform. According to him, all the recommendations of the Commission stated in the opinion are equally important, nevertheless he singled out corruption and organized crime, police reform, economic development, and more effective judiciary.

Mr. Javier Solana, the EU's High Representative for Common Foreign and Security Policy, welcomed the positive opinion and stated that "he is content that the EU, after rigorous assessment, saw enough progress and recommended candidate status".

"Macedonia has worked hard in the past period and insisted on objective opinion and a fair chance, and that is what it got with the Commission's opinion" stated President Branko Crvenkovski after the meting with Mr. Rehn, praising the fact of the Commissioner's arrival to deliver the message in person.

According to some experts, the opinion is largely a reward for Macedonia's great effort to prevent the division that threatened the country in 2001, and at the same time a timely act in order to preclude such possibility in the future.

The Vice Prime Minister Radmila Sekerinska, the person who bore the much of the brunt of the work towards this goal over the past period, has stated several times over the previous months that she doesn't fear conditions to meet, but delays; something that routinely happens to Croatia, Romania and Bulgaria at present.

According to the Slovenian experience, the pains of the pre-candidate status are incomparable to the negotiation ones, and that the EU has a policy of zero tolerance for candidate countries. Things are even more difficult now as in the past negotiations started from the easier chapters and proceeded to the more difficult ones, whereas now things are done the opposite way and the candidate can not proceed to the next chapter until the previous one is closed.

The Commission's opinion also mentioned the Macedonian-Greek name dispute in that it is a bilateral issue that needs to be resolved under the UN umbrella and it called both parties to practice constructive dialogue.

This fact, that the dispute was actually mentioned in the opinion, was interpreted in the Greek political scene as a great success of Greek diplomacy. On the contrary, Mr. Buckovski called such interpretation as being for domestic use only as the EU merely described the factual situation. Brussels joined this exchange of opinions by reproaching both parties. Time will show what is the real weight of that item in the Commission's opinion and whether Greece will gain leverage in some not distant future to condition Macedonia's entry with change of the name. This was a very present cause of concern in the Macedonian political establishment in the past months, as the opinion was awaited.

Last but not the least, the opinion mentions the country's full cooperation with the ICTY but also reminds that Macedonia has a bilateral deal with the US over the International Criminal Court, stating that that is not in line with the EU's position and that Macedonia should make effort to align its position with that of the Union.

This last point however, will be an exam in the higher years of study before graduation. As Mr. Buckovski, former professor of Roman law, said, "Macedonia passed the European exam, and it will collect its grade on 15 December".