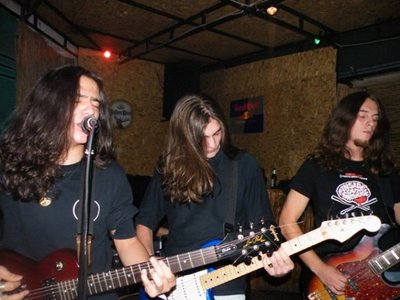 “The music by emerging bands tells of young people's bitterness for the surrounding world. Words are brutal, lyrics are cruel, and music soaks rebellion". A journey through the music scene in North Mitrovica and its young protagonists

“What a wonderful day,
It’s all sunshine!
The wonderful day.
I make an easy step while
I am taking a walk along the park,
waiting for such a day!
Let‘s fly the kites
Let’s pick the flowers in the meadow
And call for some friends
To laugh out of joy...“

Thirteen-year-old Milica from Kosovska Mitrovica has spontaneously sung the joyful words in a local traditional music festival “The Twitters of the Ibar River“.

Where is the park from Milica’s song? The author, a thirty-six-year-old English language teacher, Dejan Pavicevic, says that his inspiration was a churchyard above the city. The park from his neighbourhood had disappeared long ago, just like all other parks in the town. Sidewalks lined with hundreds of kiosks have ruined the city’s image.

Dejan is a local musician and a DJ who plays urban electronic music. His MySpace page is directed with grass and flowers. “The philosophy of my music is peace for others, a secondary motive is rebellion. If peace is rebellion, then my songs are rebellious,” Dejan says.

Still, he performs a very different version of the song that Milica sang as a cheerful tune accompanied by the local orchestra. His music is pessimistic and depressive so the words sound ironic.
Dejan says, “My music arrangement seeks to convey a different message to adults, to remind us of the parks that exist no longer, like the one from my childhood and to remind us of everything that we miss.”

He makes his music using the SKYPE internet program to communicate with his friend Mickey K, – Mirsad Kadribasic, an ex-Mitrovica resident running a music studio in Brooklyn. They are currently working on Dejan’s second CD in English. Mirsad is one of many good Mitrovica musicians who left to make their music somewhere else.

“It is a small place. So whoever is from this urban music society knows each other and they come to listen to me,” notes Dejan. However, he admits that he is not a typical representative of the local music scene.

Dejan frankly observes, “The new bands here play with bitterness about the world that surrounds them. They are not happy for missing the support from older generations. In their music, they curse with ugly words about this world, and use cruel symbols. Their music is filled with rebellion. Perhaps we were the same at their age, but the new kids are not having an easy time today.” He says that the “the warriors’ spirit” in music has just exploded in the past decade.

“I feel kind of sandwiched between the turbofolkers on one side and punkers and heavy metal guys on the other. The new generations in Serbia are ignorant about any music and culture other than turbofolk kitsch, so the real urban music is an alternative scene now.” Dejan admits, “My music philosophy is different from punk and heavy metal, which are dominant here.” He is still confident about the many-decade-long music scene in this little town and the recent boost of new bands.
Out of the grey and muddy Mitrovica shell, along with the warm pleasant children tunes, Mitrovica youth create music in garages and cellars and improvise jazz and blues in cafe bars. On Sunday morning, the voices in a church choir echo in the hill above the town.

In the town with a decadent urban spirit, the solid and refreshing music scene falls out off the sky as if an alien.

However, Kosovska Mitrovica already had a golden music age in the early nineties with a few strong rock bands and musicians who had crossed local boundaries and had a strong cultural influence over a few young generations in Kosovo. Along with many concerts, rock fests, unplugged club concerts, they were appearing on television.

Kosovska Mitrovica was known for its music even earlier. In the communist times, the music school and music associations used to support an orchestra playing big band music. Only a few capitals in former Yugoslavia, along with this former industrial province, had such orchestras. The orchestra was multiethnic and played good music until the crisis in the late eighties.

“After the war, the town’s music tape was interrupted,” says a frontman of the new music generation, Milan Kabasic, a twenty-year-old student of Russian language and literature. “It was an entire break of the tape and discontinuation of the music.” He emphasizes that the new generation has no connections with the pre-war old bands.

While remembering his first contacts with music, Milan says that despite his family playing rock music, soon after 2000, he started learning to play rock in the Danish Culture Centre. His first music teachers were some young people very much different from the prewar local mainstream musicians.
Milan remembers, “There were many problems and threats in the town, and drugs in our surrounding. We were just the kids. We knew nothing about the music. The guys who worked with us in the Centre were not like the musicians before the war. Later, I was looking for my own way.”

Together with his brother Milos and friends Emir Hasani and Nermin Memovic, they made the Dark Sky band, which is now the most popular in the northern part of Mitrovica. These boys play a raw rock, sometimes heavy metal and they sing about love, rebellion and their gloomy surrounding.

Most of those rock bands started to play at the initiative of the Mitrovica Rock School, supported by the international organisation, Musicians Without Borders, a few organisations from Holland and a local NGO, Community Building Mitrovica. Thanks to this help, they have received the space and instruments to practice, while older Mitrovica musicians teach them.

Young Mitrovica musicians have not yet received the prewar levels of support from institutions and the local self-government.

Although north Mitrovica has self-taught musicians, many musicians have a classic music background from the elementary and secondary music schools. These schools are very active and popular in the town.

In contrast, the official music academy, which was relocated to north Mitrovica a few years ago, has become completely alienated from the community. In addition, it has not even developed its own concert program. Therefore, this highest music school has currently pushed itself to the very margins of the local music society.

At least once a week, The town of about twenty thousand residents has unplugged and live performances. The crowd grooves and swings to the music. Many students who reside in north Mitrovica have freshened those parties. The music of north-Mitrovica bands is also available in MySpace, Facebook and Youtube pages so they attract many fans.

Undoubtedly, the central music event is the annual international “North City Jazz & Blues Festival”, which has attracted great regional and international musicians such as Tom Harrell and Abram Wilson.

Faraway from usual Kosovo postcards images, hidden from the media template of radical and impoverished north Kosovo residents, the North City musicians lay back coolly in bars, happily downing their beer. Only in their music will they tell you how they see the world around them.