Kosovo: A Difficult Year Ahead 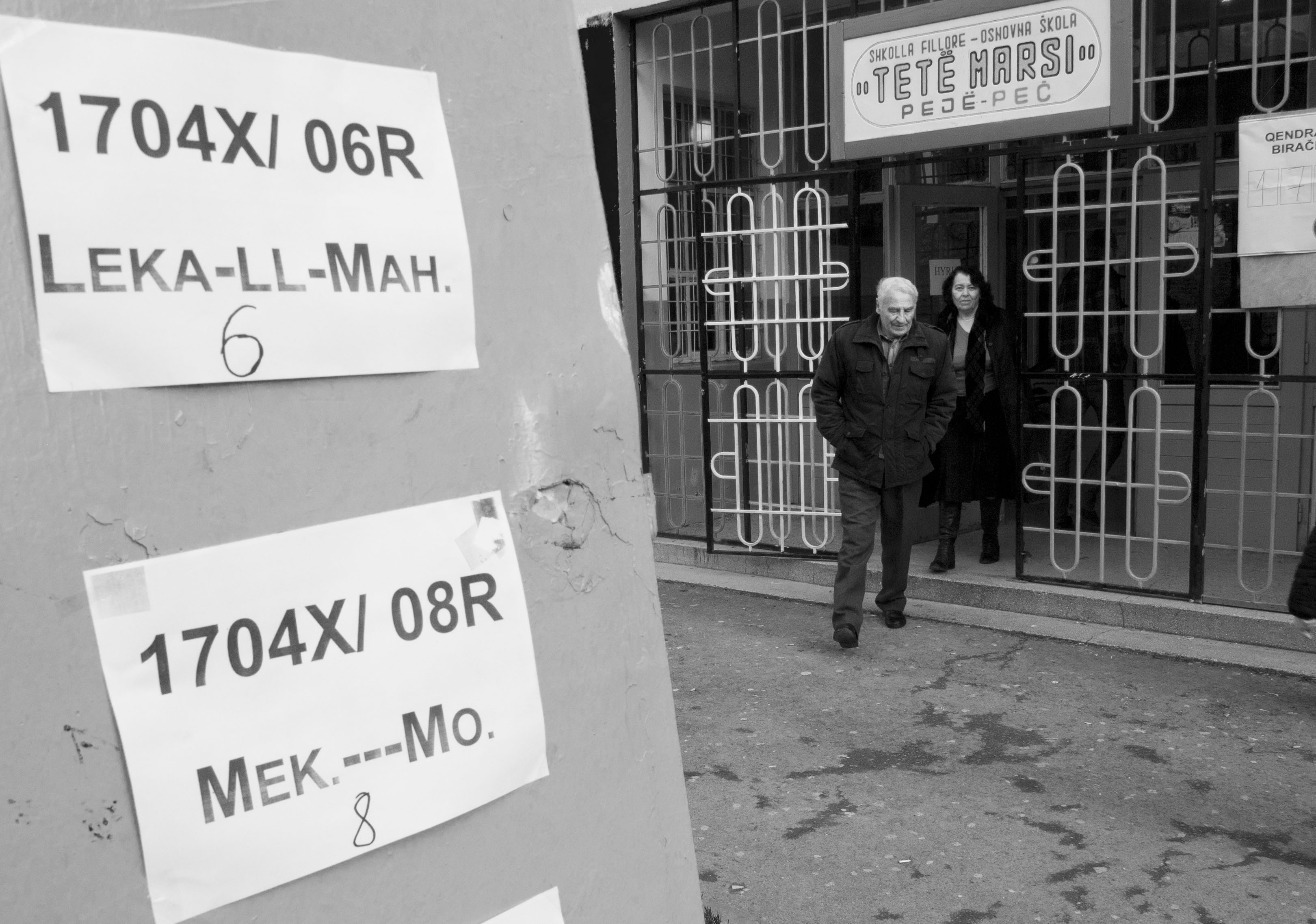 The election in Kosovo was expected to produce a strong government, capable of entering into new negotiations with Serbia and restarting the economy. Instead, election irregularities and the criminal allegations against Hashim Thaci make the job of the new government very difficult

On the evening of 12 December 2010, the sky above Pristina was exploding with joy and the colours of fireworks. PDK supporters celebrated in the streets after the incumbent prime minister, Hashim Thaci, declared victory in Kosovo’s first general election after its declaration of independence of February 2008.

“We beat everyone. This is a vote for European Kosovo,” said Thaci, before the noisy convoy of cars waving flags out the windows took to the streets for most of the night.

Just over a month later, the joy has vanished. The election was put in question by the many detailed accusations of vote-rigging, especially in areas traditionally controlled by PDK. The partial repetition of the vote held on 9 January did not succeed in wiping away the feeling that Kosovo had seriously failed its first democratic test as an independent state.

For the European Network of Election Monitoring Organizations (ENEMO), “the serious violations of procedures seem to have been accepted, and there has not been any attempt by the officials at the polling stations to stop irregular behaviour.” After having participated as an observer of the repeat-vote, Ulrike Lunacek from Austria, who is the European Parliament rapporteur for Kosovo, pointed to the need of a new election by the end of the year, stating implicitly that the credibility of the election has been compromised beyond repair.

For Thaci, however, the problems concerning election irregularities have been sidelined by much graver accusations: those put forth by Swiss senator Dick Marty. On 16 December, Marty presented a report on behalf of the Parliamentary Assembly of the Council of Europe, which accused Thaci of having organized heinous crimes, including selling organs of Serbian and Albanian victims, during and after the 1999 war.

Thaci scorned the allegations, which had already appeared in 2008 in the memoirs of the former ICTY prosecutor Del Ponte.  Now it is clear, however, that these accusations are not only a personal problem for the Kosovo prime minister.

Judged by the beginning, this could be a difficult year for Kosovo. Not only for Thaci who remains the most probable candidate to lead the new government in Pristina, but Kosovo in general. As the only country in the Balkans that remained off the Schengen “white list”, Kosovo seriously risks paying the political price for a weak government with limited credibility.

For British journalist Tim Judah, today in the Balkans “the potentially most dangerous issue is the deepening of the furrow which separates Kosovo from the other countries in the region.”

The 12 December election has added further weight to an already difficult situation. The electoral campaign, even though short and improvised, has nonetheless brought some good news. Above all, compared to the previous campaigns monopolised by the issue of independence, this election had more diverse “political offers” (even though not necessarily welcome, especially by international circles).

With Vetevendosje’s entry on the political scene – it became the third strongest party in parliament, after PDK and LDK – for the first time not all the political parties proposed the same strategic objectives for Kosovo. Vetevendosje, in fact, argues that the absolute  priority for Kosovo is its territorial integrity and a possible union with Albania, and these should be pursued even at the price of the future Euro-Atlantic integration of the country.

Therefore, it is not surprising that Vetevendosje was the only party with which US Ambassador Christopher Dell refused to meet during the election campaign.

At the opposite end of the political spectrum, the Fryme e Re (New Breathe) party unsuccessfully proposed a program completely focused on economic development and the creation of an effective and less corrupt public administration, thereby considering territory and identity issues as less important.

The poor result of Fryma e Re (which did not surpass the 5% threshold) was interpreted by some analysts as a consequence of the short time available to prepare the campaign. However, it could also indicate the publics’ difficulty at finally detaching itself from the “post-war” issues that, despite the declaration of independence, continue to permeate public debate.

The program of Fryma e Re has, however, pointed to another issue, perhaps the most important during the election campaign: the emergence of the economy as the absolute priority to be addressed by the political establishment. The (difficult) economic situation was not less important in the past; however, all other issues were eclipsed by the ultimate priority of obtaining independence.

Unfortunately, during the election campaign, Thaci addressed the economic issues almost exclusively with loud promises for salary hikes for public officials. These promises were made even at the cost of risking the previously made agreement with the International Monetary Fund (IMF).

Overall, Kosovo’s political leadership has still proven incapable of proposing specific programs for improving the economic conditions in the country. There is no other economic development except Kosovo’s recent admission into the IMF and the World Bank. The country’s economy remains at risk.

The official unemployment rate is 48%; 45% of families live under the poverty line (and 17% live in absolute poverty). Each year 25,000 to 30,000 young people enter the labour market without the prospect of getting a job. In the meantime, important revenue sources such as remittances, foreign investments, and foreign aid, are declining.

In essence, since the declaration of independence in 2008, the government in Pristina has tried to stimulate the economy almost exclusively through public spending increases, either by raising salaries or, primarily, through large public works.

This strategy was symbolised by the decision to build a highway crossing Kosovo and connecting Albania and Serbia. It should cost around 700 million Euros (Kosovo’s estimated GDP for 2009 was 3, 8 billion). As a result, Thaci’s government was soon, both by its supporters as well as critics, called the “asphalt government”.

Almost everyone agrees that Kosovo needs modern infrastructure (including roads). The problem is the lack of a sound financial base for investment in infrastructure. The government is spending the budget reserves accumulated during the careful financial management by the UNMIK administration. This money, however, is under the risk of running out quickly.

In the meantime, the central issue of defining a strategy for stimulating the emergence of functional and competitive private sector (possibly outside the grey economy) remains unaddressed. At present, private companies in Kosovo (there are 45,000 active companies in the country according to the Kosovo Business Registration Agency) are small, concentrated in the tertiary sector, and incapable of absorbing the growing labour supply.

The poor competitiveness of Kosovo’s businesses is further aggravated by the huge trade deficit. Kosovo exports little or nothing and imports almost everything. Despite its agrarian character, for example, the country imported 112,000 tons of wheat in 2009, including 100,000 tons from its “enemy” Serbia.

On the other hand, the surge in public spending seems to have contributed to the rising levels of corruption in the public administration. Transparency International’s Corruption Perception Index, which included Kosovo for this first time in 2010, placed the country at the top position in the region, in the unenviable ranking of perception of corruption. In its 2010 Progress Report, the European Commission underscored that “the reform of the public administration in Kosovo remains an open challenge.”

Many ministers and public officials are in the spotlight for alleged corruption. The most famous court case is the one involving (not by chance) the transport minister Fatmir Limaj. Limaj is Thaci’s right hand and the person in charge of the large infrastructure tenders awarded by the government in Pristina.

The lack of a functional economy has brought about another negative effect: the substantive deterioration of media freedom, both in the electronic as well as the print media, which are ever more dependent on the support from the only major advertiser on the market, the government.

In addition, intimidations against the press in Kosovo can be very obvious and extremely aggressive; for example, in the first days of January 2011 against journalist Halil Matoshi.

On 6 January, Matoshi called attention in the daily newspaper Koha Ditore to a possible “patriotic anarchy”, claiming his right to distinguish between “good” and “bad” patriots. This obviously referred to the current delicate situation of Prime Minister Thaci. The journalist was immediately subjected to a violent threat by the association of former UCK veterans, whose leadership is close to Thaci. They called him a “traitor” and “a piece of garbage left by the occupiers [the Serbs]”.

The difficult situation of the media in Kosovo is also felt by the public television channel RTK, the major source of information for Kosovo public opinion. The government subjects it to increasingly tighter control.

The year of 2011 promises to be an especially delicate period for Kosovo, primarily on the international front, with the restart of the much anticipated (even though unclear) new negotiations with Serbia. The talks should have the prime objective of some sort of agreement concerning northern Kosovo which is de facto outside the control of Pristina.

The snap vote should have quickly led to the creation of strong government capable of entering in negotiations with complex and potentially risky outcomes. Unfortunately, the election has taken Kosovo in the opposite direction, creating conditions for a government weakened by the poor domestic and international credibility, as well as the continuing economic crisis.

The “internationals” are also taking a step back. In a long interview  to Koha Ditore from 13 January, the International Civilian Representative (as well as EU special envoy) Peter Feith, while rejecting demands for repetitions of the vote, talked of “serious problems of international credibility” for Kosovo, calling upon the incoming prime minister to select “competent, credible, and honest” ministers.

US Ambassador Dell, who is perhaps the voice listened with most attention in Pristina, explicitly asked that anyone with a prior criminal record be excluded from the government.

“A good government can restore the faith of citizens more than new elections,” said Dell seeking to display of confidence. Perhaps, the task of the new government is not impossible. It will, however, certainly not be easy.