Between Dialogue and Transition 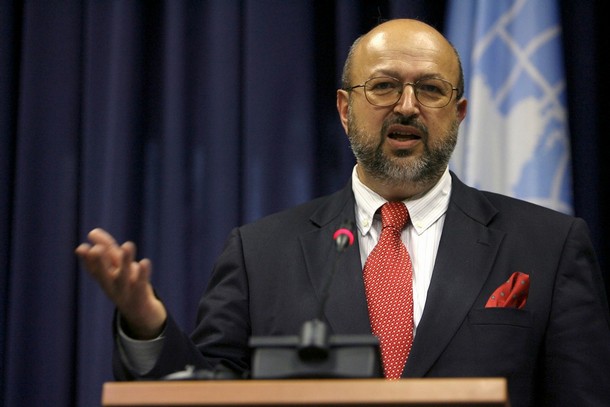 The role of the UN mission after Kosovo's declaration of independence, the relationship with the European mission EULEX, the dialogue process with Belgrade and Pristina, the situation in the area north of Mitrovica. An exclusive interview with Lamberto Zannier, new head of UNMIK

Mr. Zannier, you recently stated that, following Pristina's declaration of independence, and the simultaneous strengthening of the parallel authorities of the Serb community, "While I am still vested of executive authority under Resolution 1244, I have no tools to enforce it." What does this mean? What is the present role of UNMIK in Kosovo?

Veteran Italian diplomat Lamberto Zannier took office as UN Secretary-General Special Representative and head of UNMIK on June 20th 2008, five days after the country adopted its constitution on June 15th 2008, some four months following its unilateral declaration of independence from Serbia on February 17th. He succeeded Germany's Joachim Ruecker, becoming the seventh chief of UNMIK since the mission was established in 1999.

This was an observation of facts. After June 15, with the entry into force of the Kosovo constitution, and a certain number of international recognitions, a situation emerged whereby institutions controlled by the government of Kosovo have filled in the space previously reserved by Resolution 1244 for the executive powers of UNMIK. The Kosovo government no longer acknowledges UNMIK in its previous role. This is what determined the conclusion that the operational space for UNMIK has changed.

In the areas where authorities from Pristina still find it difficult to deploy and operate, that is, the areas populated by the minorities and above all in the north of Kosovo, UNMIK's authority is better recognized and Resolution 1244 remains the major reference for the activity of the international community. Nevertheless, we are also forced there to negotiate constantly on each and every issue. It is not enough to make a decision: in order to implement it, I need to follow up on it; to engage in talks with the actors on the ground.

Who then has the executive authority that UNMIK no longer possesses de facto?

There are many actors. On one hand, the government in Pristina drafts bills subsequently approved by parliament and implemented by Kosovo institutions on the ground. The UNMIK retains some residual functions, which I continue to perform, to the extent possible. Then, the new institutions (EULEX and ICO) from the Ahtisaari plan try to establish a presence on the ground, but which encounter the same difficulties as the Kosovo government. In addition, the institutions of Belgrade continue to have strong influence in the areas populated by the Serb minority. The institutions created by Resolution 1244, UNMIK and KFOR, remain present on the entire territory of Kosovo and still have, in my view, enough room to operate effectively.

Belgrade's request for a consultative opinion by the International Court of Justice (ICJ) on the legality of Kosovo's independence is being discussed in New York in these days. Can this initiative have some effect on the ground in Kosovo?

This initiative will have a global impact, which should be assessed. There could be consequences for the dynamic of international recognition of Kosovo, and this could prolong the present transitional phase.

The relationship remains confusing between UNMIK and the European Union's EULEX mission. Is there a political agreement concerning the transfer of power and competences between the two missions?

This is an unfolding process. The UN Secretary General's report of last June refers to the United Nations' readiness to work with EULEX and to transfer to the European mission the competences in the framework of the Resolution 1244. As to operational and logistical issues, a technical agreement was signed between the missions in mid-August. Elements still need to be defined in regards to political aspects.

In this sense, you have stated, "We expect the EULEX mission to be deployed in the months to come, and to operate under UN authority in accordance with Resolution 1244." What are, in your view, the necessary steps to this end, to make this prospect tangible?

This does not depend on me. This decision must be taken by the states that have a stake in this issue. There are some contacts between the EU and Serbia. In my view, there should be some sort of endorsement by the Security Council, or some sort of acknowledgment that EULEX operates under UN mandate.

In your view, is a motion in the Security Council necessary?

I think that in reality it would be easier to refer to some sort of acknowledgment by the Security Council. This could be done in many different ways. It is not up to me to define them. However, probably this would be the easiest road.

In the meantime, UNMIK has begun a process of reconfiguration. What is its goal?

The reconfiguration consists of three phases. The first, which is already underway, concerns structural modifications in regards to direct administrative functions that UNMIK can no longer perform. The second phase - reconstruction of the rule of law sector (police, justice, customs) - which will be the largest, awaits the deployment of EULEX. If within a 120-day transition period, which should be completed by the end of November or early December, EULEX receives the green light under a UN mandate to deploy on the entire territory of Kosovo, these functions could be taken over by the EU mission. In this case, UNMIK, as such, could substantially downscale, up to 70% or even more. This would be the third phase, concerning logistics, administration, services, security, and so forth.

Two organizations should then operate under UNMIK at that point: on the one hand, OSCE, as a real pillar, would be restructured in order to perform a more operational role on the ground; and, on the other hand, EULEX would have an umbrella arrangement and would be in charge of the rule of law.

Does this imply a hierarchical relationship between the two missions, or just an operational one?

I would say this should essentially be a political relationship. There will not be a hierarchy. The mandate will belong to the UN, not necessarily UNMIK. There would nevertheless be close coordination on the ground.

UNMIK has been one of the biggest employers in Kosovo. Will there be some sort of a "social parachute" for the laid-off local staff?

We have discussed this with Kosovo authorities, and I personally raised the issue with the Prime Minister. There is no single right solution. Some staff have already been absorbed by other missions on the ground; in particular, by EULEX. There is some handover of staff and capacity from one operation to the other. What I have underlined to the local authorities is that anyway, we have highly professional staff trained by UNMIK, which would be very useful to Kosovar institutions when they are deploying on the ground.

How do you assess the situation in the north of Kosovo? Are the concerns justified of those who talk of a grey zone outside the control of international institutions?

The north of Kosovo is an area where it is still difficult to operate, an area that is problematic for Pristina and also for Belgrade. This is one of the issues being discussed with Serbia, in an attempt to bring the situation under control. The prime objective is to restore the rule of law in the area. The court in Mitrovica needs to be reopened and we have already launched an initiative to do this. The police in Mitrovica operate effectively, but this is not enough without functional justice. Then, there is the issue of customs, which has been much politicised. Nevertheless, we hope to resolve it in the following months, reaching a solution is a common interest.

Do you see any progress in the dialogue process?

There is a chance of progress. The dialogue is not easy. Under ideal circumstances, it should directly involve the two parties, but since there are political obstacles, the UN at this phase has to continue its facilitating role.

What are the expectations of your counterparts? Are there big expectations from the new government in Belgrade?

Changes are not visible on daily basis. With the change of government in Belgrade, the readiness for dialogue is greater compared to the previous government, but there is still a long way to go on the issues themselves. It will take patience. As to the authorities in Pristina, at least in the beginning, we had difficulties finding balance in the relations between UNMIK and the Kosovo government, because this relationship was of a very different nature before the adoption of the constitution.

From that moment, UNMIK has become a "status neutral" organization and has distanced itself from both parties. At least in the beginning, this was perceived with certain suspicion by both Belgrade and Pristina. I believe this phase has been overcome, and that both sides see the United Nations as a legitimate counterpart.

Representatives of the Serb community have emphasised several times that they do not intend to cooperate with EULEX but only with UNMIK. Will your mission acquire a specific role in the areas of Kosovo populated by Serbs?

We continue to operate on the entire territory of Kosovo, although in different modes. I would say that we pay particular attention to areas where minorities live, not only the Serb minority. UNMIK can more easily communicate with the minorities and, in particular, with the Serb minority. We continue to share this capacity of ours with everybody, for the purpose of finding solutions to problems.

When presenting his last report, the former OSCE chief mission Tim Guldimann stated, "Kosovo is not something that we can call a multiethnic society. There are different communities living in Kosovo, but a multiethnic society would imply integration, mutual understanding, tolerance, co-existence. And we are not seeing this." How do you assess this analysis?