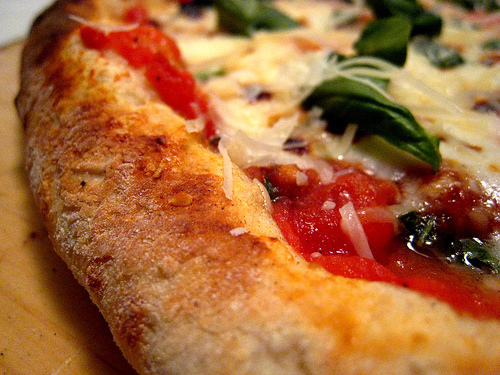 Internationals and locals in Kosovo, two groups that sometimes seem to inhabit separate worlds, have difficulties communicating because of stereotypes held by both sides. Playwright Jeton Neziraj and his German counterpart Kathrin Röggla have explored the subject in a series of correspondences; now edited under the title “Pizza UNMIK”

Jeton Neziraj (1977), art director of the National Theatre in Pristina, is currently one of the most active playwrights in Kosovo. With a sensitivity to real-life issues, Neziraj has often made the relationships between Kosovar Albanians, Kosovar Serbs, and international officials central themes in his work. Last year, Neziraj explored the theme of perceptions of internationals in Kosovo. His correspondence with German playwright Kathrin Röggla on the topic was later transformed into a joint project. Entitled “Pizza UNMIK”, the work was presented at the Leipzig Book Fair where it was welcomed with significant interest by the public and the German press. It will soon be made into a play. “Pizza UNMIK” describes the complex and often difficult relationship between resident Kosovars and the internationals. Members of the two communities often seem to inhabit parallel worlds and have a hard time communicating due to stereotypes and reciprocal prejudices.

How was “Pizza UNMIK” created?

“Pizza UNMIK” is the title of the correspondence I had with German playwright Kathrin Röggla which explored the differences between locals and internationals in Kosovo. In one of the letters, I explained to my German colleague that the many internationals who live and work in Kosovo go to different bars and restaurants than the Kosovars and that the menu items in those places have different names. For example, a type of pizza which Kosovars call “Pizza Pristina” is named “Pizza UNMIK” in the places for internationals. The Goethe Institute, which supported our project, liked the title, and we decided to use it.

How did your correspondence with Kathrin Röggla on the subject of internationals in Kosovo first begin?

The correspondence started in relation to “Hotel Pristina”, a project of the Büro für kulturelle Angelegenheite in Berlin which was done in collaboration with the “Qendra Multimedia” from Pristina and with the support of the Goethe Institute of Belgrade. The correspondence revolved around the role of international NGOs and international missions in Kosovo. We wanted to explore their lives and relationships to local culture and the way in which the two worlds converged. In fact, the coexistence of two parallel worlds can be seen in daily life in Kosovo. International NGOs are usually discussed in completely different terms, primarily related to the impact they make on the society they operate in and the admirable work they conduct. Later on, the “social mercenaries” from the NGOs, as Röggla calls them, write books and brochures about the countries they have worked in, usually with pathetic undertones, describing the misery of such places, local residents, and their problems. Usually however, the point of view of the locals is completely absent...

How are internationals perceived by Kosovars?

It is difficult to give a short answer to this question. In my correspondence with Röggla, I listed some of the cynical names and descriptions which have by now become Kosovar stereotypes of the internationals. For example, it is said that internationals eat a lot, earn lots of money, frequent prostitutes, are homosexuals; that for them, Serbs and Albanians are indiscriminately victims and criminals; that they drink beer from large pints, have sex with their local interpreters, are spies, work for the interests of Serbia, that they can get you a visa easily, that they are losers who cannot find jobs in their own countries, that they like eating salads and vegetables like cows, cause road accidents without feeling any responsibility, find flaws with everything which is local, and treat Kosovars as if they were an African tribe. Many jokes, often quite colorful, circulate about them.

And how are Kosovars perceived by the internationals?

I think they also have cynical stereotypes of Kosovars. But it would be better to ask them this question. It does not pass as unobserved that they often come to Kosovo convinced that they are going to find themselves in a country that is collapsing and that they will have to work with uneducated and uncivilized people.

How were these two parallel worlds created? Initially Kosovars saw the internationals as their saviors; they almost saw them as messiahs...

There was undoubtedly huge respect for the work of the internationals in the aftermath of the conflict. It is normal; at the time Kosovo was a destroyed society and it needed help with reconstruction, both economic and psychological. The enthusiasm was also a result of NATO’s help during the conflict. With time, however, people noticed that it was actually the UNMIK mission that made development more difficult. Kosovars started feeling bothered by these international tutors who were earning around 20 times more than the locals, often for the same work. Many internationals started abusing the hospitality of the Kosovars. The white jeeps which arrogantly transport UNMIK officials have become a symbol of colonization in the eyes of Kosovars. UNMIK got the best buildings. Pristina was transformed into a ghost city with the UNMIK offices surrounded by huge concrete blocks or barb wire, hermetic and inaccessible to common citizens.

Parallel worlds are nothing new in Kosovo. How much do the long years of parallel societies during the Milosevic regime impact the perceptions Kosovars and internationals have of each other?

Many UNMIK officials present in Kosovo come from developing countries. Has this factor influenced Kosovar perceptions of the mission in any way?

In reality, many of the UNMIK staff come from countries in Asia or Africa, which are in many ways more backward than Kosovo. This has from the very beginning contributed to skepticism and it has cast a bad light on UNMIK’s credibility in the eyes of the Kosovars. I will give an example: for a time, the position of UNMIK Minister of Culture was filled by an official who came from a country that didn't even have a ministry of culture.

Has the arrival of European EULEX, which has in reality replaced UNMIK, changed the situation?

Some things have effectively changed with EULEX’s arrival, also because the mission is much smaller in terms of personnel compared to UNMIK and has a less active role in Kosovo’s administration. Despite the respect Kosovars have for the European Union, I think that most feel tired of these missions; there have not been any positive changes in everyday life. In some ways, the new mission is not much different from UNMIK. The newly-arrived officials drive blue jeeps instead of the white ones, but they continue to disregard speed limits with impunity. This is very irritating because it gives one the impression that they want to arrogantly demonstrate their superiority to the “imperfect” Kosovars. In addition, a large part of the EULEX staff was recruited from UNMIK...

The Vetëvendosje movement of Albin Kurti seems to have garnered increased levels of support recently. Does the existence of two parallel worlds have anything to do with their rise?

Vetëvendosje primarily mobilizes young people who are tired of the total inefficiency of Kosovar institutions. There is no doubt that the movement is growing. Albin Kurti articulates some of the fundamental questions about the future of this country which concern us all. His principal target has always been UNMIK and its role in Kosovo - a role which has always been contradictory. Kurti remains perhaps the most courageous and critical person in Kosovo at present. He asks questions about the future of Kosovo which represent a challenge for all of us, not only for the UNMIK officials and the other international organizations in Kosovo.

But the internationals must have done something good in Kosovo...

Absolutely, yes. There are many good things. Immediately after the war they produced order and created basic government institutions. They have been very active and have contributed to the process of democratization and respect for human rights in many ways, for example by monitoring and organizing elections. Their presence has created many jobs. There is no doubt about this and Kosovo citizens are perfectly aware of it. They have also contributed to a cultural exchange which otherwise would not have been possible in Kosovo.

What will remain after the internationals will have left Kosovo?

Many things: the dust of the white jeeps, their empty restaurants, many jobless youth...but above all, a state in whose creation the internationals, for better and for worse, have indisputably played a central role.