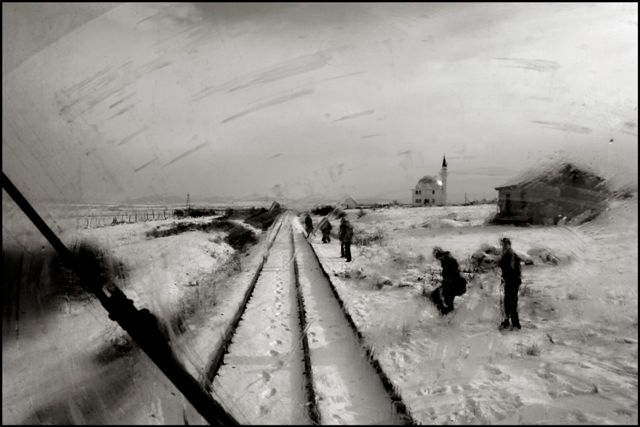 Kosovo celebrated its seventh anniversary since the proclamation of independence, amidst news of thousands of its citizens trying to leave the country for better economic conditions in the EU

When Kosovo declared its independence from Serbia, in February 2008, there were a lot of expectations about how the youngest and poorest state in Europe was going to improve. Seven years on from independence, hopes turned into frustration and despair. Accordingly, few Kosovars saw any reason to celebrate this anniversary of Kosovo’s statehood.

The departure of tens of thousands of people from Kosovo into the European Union is the best sign of the furious disappointment of Kosovars with the post-independence situation. They realize that having independence and freedom is not sufficient if there is not economic development and social welfare. Around 45 percent of the Kosovo population is unemployed and around 20 percent live in poverty. Tired cause of the difficult economic conditions, unemployment and poverty, in the last few months hundreds of people departed each night from Kosovo seeking asylum in EU countries and dreaming of a better future. They travelled by bus to Serbia and then, with the help of traffickers, entered into Hungary. Officials in the EU said that almost none of them has any chance of receiving asylum, and that they will be deported.

On the occasion of the seventh anniversary of independence, Kosovo's Prime Minister, Isa Mustafa, urged its citizens not to leave the country. “People have no reason to leave Kosovo, they have a reason to stay," he said during a speech in a special parliamentary session. PM Mustafa promised a brighter and more prosperous future for Kosovo citizens, pledging to fight unemployment, poverty, corruption and organized crime.

The violent January protests in Pristina with anti-government demonstrators throwing stones and clashing with police are another indicator of the general discontent of Kosovars with a corrupted leadership, lack of rule of law, stalled economic and social progress, and lack of perspective for young people.

“Of course, seven years on from independence, people expected progress in all fields, but instead we have now degradation and regress in education, economy, justice, health system etc. People are depressed and feel hopeless. They see that justice is selective; jobs are offered only to those who are affiliated with political parties or groups of interest. Political parties have impact almost in all segments of the life and if you are not part of it, you are completely isolated”, says Besa Luzha, a political analyst.

According to her, a very weak health system and low pensions coupled with the luxurious life style of the politicians, and their arrogance towards simple citizens, have contributed to simmering the discontent of people with the governing elites in Kosovo.

Far from our expectations

On the seventh anniversary of Kosovo’s independence from Serbia, the president Atifete Jahjaga in her speech acknowledged that “Kosovo still does not resemble to the image we hoped for and desired […] Our journey to enlivening the vision of an independent, democratic, free Kosovo, in peace, continues to remain difficult. Lots of work has been done. Mistakes have been made. There were many successes, as well as sacrifices and continuous challenges […] Many a time have we been disappointed, isolated and hopeless. We felt powerless, disenchanted, tired. Because the Kosovo of today, for which we were ready to surrender our own existence, has yet to fulfill our expectations”.

Since breaking away from Serbia, Kosovo has been recognized by 108 countries, including the US and 23 out of 28 EU member countries. Political analyst Halil Matoshi considers that these recognitions - although not sufficient for Kosovo to become a UN member state - can be seen as a success story, combined with Kosovo’s membership in some other international organizations, including the recent membership of the International Olympic Committee.

But Kosovo’s status remains an unfinished issue when it comes to its relations with the two Brussels based organizations, EU and NATO, that Kosovo aspires to join one day. Neither the EU nor NATO recognize Kosovo as an independent state, due to the fact that some member states disagree with Kosovo’s separation from Serbia. Hence both the EU and NATO refer to Kosovo with the asterisk (Kosovo*) which means: “This designation is without prejudice to positions on status, and is in line with UNSC 1244 and the ICJ Opinion on the Kosovo Declaration of Independence”.

This denomination is an uncomfortable compromise for Pristina and Belgrade to enable Kosovo’s representation in international and regional gatherings. It was reached after many long months of negotiations between both parties facilitated by the EU. Indeed, since Kosovo declared independence, the EU has spent much energy in the effort to normalize relations between Pristina and Belgrade, as a precondition for aspirations of both countries to join the European Union.

Despite the general discontent with the progress that Kosovo has made seven years after independence, there are some achievements too, including the new highway that connects Kosovo with Albania, a better legislative framework, new schools and a better road infrastructure.

“We have never believed that this state building would be easy, because our resources and capacities are limited; growing pains are considerable, priorities abundant and expectations high. We have no time for disappointment and there is no room for hesitation…We made Kosovo. Now we must build the state which we all desire”, said President Atifete Jahjaga in her speech on the occasion of the seventh anniversary of independence.

This year Kosovo is expected to sign the Stabilization and Association Agreement with the EU, but analysts warn that, even with this agreement, Kosovo will not be treated as an independent country. On the other hand, there is not much room for optimism regarding visa liberalization. The EU Commissioner for European Neighbourhood Policy and Enlargement Negotiations, Johannes Hahn, in his recent visit to Kosovo made it clear that before EU can recommend a visa-free status for Kosovo citizens, the number of asylum applications to the EU and the number of people irregularly staying in the Schengen area needs to fall.