Back to the Danube 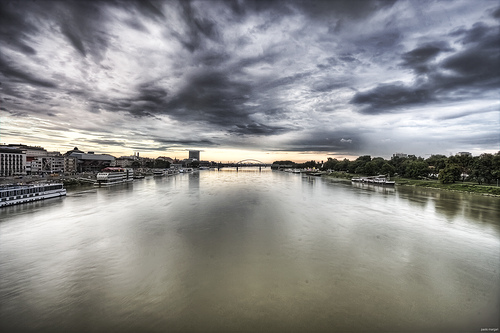 For over a century, Greek shipowners were the absolute lords of the Danube river. Their ships once carried goods from the Black Sea to Europe, but practically disappeared by War War II. Today, in spite of the serious economic crisis, Greece is trying to regain its role

Annus Domini 1900: on the slow Danube river, most freighters bore the names of Panaghia (Virgin Mary), Aghios Yorghi (Saint George), Aghios Nikolaos (Saint Nicholas): all Greek names. Registers kept by port authorities all along the river showed that 83 captains came from Cefalonia, Ithaca, Chios, Santorini and other Greek isles boasting an ancient tradition of navigation. In 1895, the ten major companies shipping goods, mainly wheat, which sailed along the massive river connecting the Black Sea with the very heart of Europe belonged to Greek shipholders based in Piraeus or London and the ships bore the names of Stathatos Brothers, Theofilatos Brothers, Chryssoveloni, Koyklelis & Michaelidis, and Karavias. These companies had a capacity of 109 tons and challenged the absolute power of British shipping companies.

After 1921, the Greek presence on the Danube River diminished. Interests in Danube navigation were too great not to regulate the use of this huge waterway, which was subsequently subjected to a complex set of rules and regulations. A European convention to this end was drafted and undersigned in Paris in 1921. The Greeks, who wanted to keep navigation on the Danube and its main tributaries (such as Prouthos) unregulated, were left out of the game. Romanians, who were the main supporters of regulating the use of “their” river, first forbade any vessel with any other flag than Romania’s to navigate the Prouthos, and then imposed the same restriction on the Danube. This situation continued until the end of World War Two when the Iron Curtain descended on the Balkans and Romania decided to nationalize its rivers in 1948. The result was the following: in 1916, 332 ships and 21 towing vessels navigated under Greek flag, while in 1920 only 223 ships and 22 towing vessels flew the Greek flag. After a century of shipping prominence, Greek vessels gradually disappeared.

But the Greeks are back. According to an article published in the Athens’ daily newspaper TO Vima, Greece was recently re-admitted to the European Commission for Navigation on the Danube and its Tributaries, thanks to the efforts of the Ministry of Navigation (both under the administration of the previous Conservative government and under the current Socialist administration.) The main objective is to update the Belgrade Convention by inserting new rules. The Convention (1948) de facto prevented foreign investors from navigating the Danube, much like the nationalization processes later implemented in Socialist countries (especially Romania, which is today a full-fledged member of the European Union) during the Cold War.

“Our interest in navigation on these rivers has never ceased”, a spokesperson of Athens shipholders declared to TO Vima. “If we succeed in setting new rules on navigation within the new EU framework, we will achieve faster, cheaper, and safer transport of goods into the heart of Europe, to regions far from ports. We can invest quite a large amount of capital in the development of port facilities along the river Danube and its tributaries in Eastern European countries. The business potential of the tributaries of the Danube is largely underestimated, but we can develop their potential and deliver state-of-the-art shipping and container-handling services.” Of course, Russia is among the states interested in reviving business on the river Danube.

This all sounds pretty peculiar. Greece is undergoing one of the worst economic crises in its history, but many Greek entrepreneurs have big plans for the future and are ready to invest huge amounts of money in places thousands of kilometres away from their homeland. Moreover, the aim of these investments is to prevent resources from draining out of the country: ships will continue to depart from the Black Sea ports along the Danube. According to what TO Vima reports, “once vessels are in Germany, they can cross the River Main channel and get into the Rein river, berthing in the port of Rotterdam”.

Indeed, Athens' companies' interest in navigation on the Danube never ceased, not even during the war in the former Yugoslavia when bridges on the Danube were bombed and the Balkan and Caucasian regions (which face ports on the Black Sea) were on fire. For example, in 1995 Theravax (a Greek company) founded a joint venture with the newly-formed Moldavan state and won a tender for the construction of the only Moldavan port on the Danube river, along the 500 meters of the Danube’s coast near Giurgiumeli. The enterprise went bankrupt in 2001 and ended up in Dutch hands. But let bygones be bygones. The Greek want to try again. Gerlina Charlaftis, Professor of Maritime Economy in Ionia University in Corfu, said: “It seems like the past is back.” Charlaftis is a leading expert in Greek shipping history. She has written several books on the subject and the data on Greek navigation on the Danube from 1850 to 1948 was taken from her books.

“Just consider that the current head of the Anglo-Greek Cooperation Committee in London is Epaminondas Embirikos: he is the nephew of and bears the same name of Epaminondas Empirikos, one of the greatest shipping magnates of the Danube!” said Professor Charlaftis. Since ancient times, the Greeks have settled on the coasts of the Black Sea, especially on the Danube Delta: Histria, Callatis (Mangalia), Tomi (today’s Costanta), and other cities were founded on trade in shipping by sea or river. History goes on.