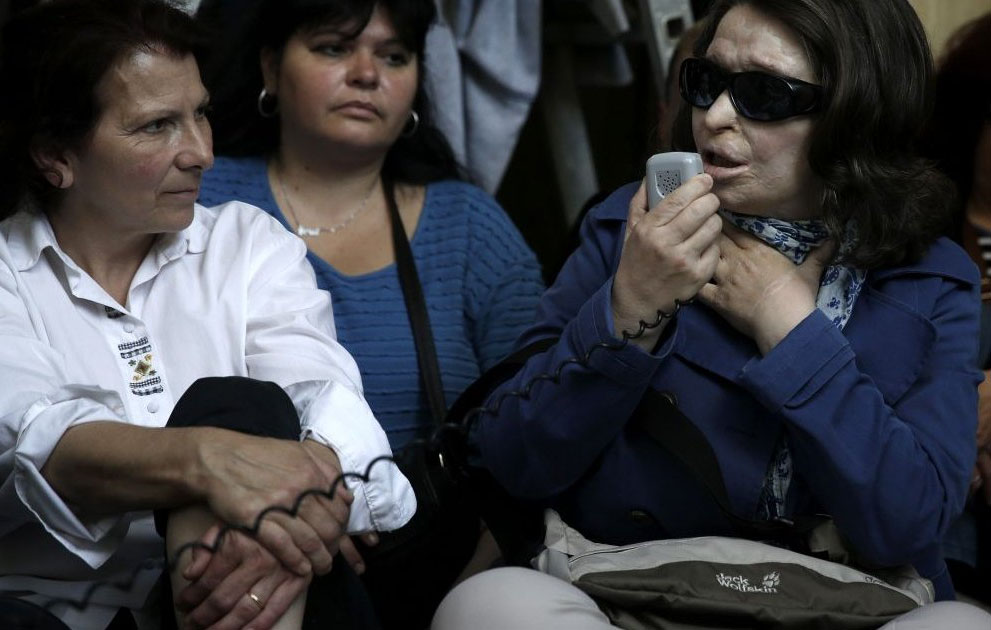 Cleaners, care-givers, baby-sitters: 9 out of 10 are women, often exploited. MEP Konstantina Kuneva, who was personally attacked for her activism, now fights for female workers' rights in Europe

Konstantina Kuneva, 52, a MEP elected in the Greek radical Left Syriza party, knows what it means to be an exploited migrant. She was attacked for fighting for her rights and those of her fellow slaves while working for a cleaning company subcontracted by the Greek government to clean the oldest metro line in Athens, Kifissià-Pireus.

To say she herself suffered, we mean it literally. On 23 December 2008 she was attacked by strangers waiting outside her house in the working class suburb of Petralona. They threw vitriol in her face and shoulders and even forced her to swallow some in order to keep her quiet for ever. A full-scale execution of a woman who had become the symbol of the Attika Union of cleaning personnel and domestic workers (PECOP). Far too dangerous for the groups in Athens and elsewhere which take advantage of undeclared workers with no rights.

Konstantina arrived in Greece from Bulgaria in 2001. She has a degree in history but was thrown to work with a bucket and broom. She managed. It could have been the prayers of her son with whom she reached Athens when he was only four years old with a heart condition, or those of her mother, over sixty and also a migrant. Today Mrs Kuneva watches the world from a seat in the European parliament with her one remaining sea-green eye. Her face and body are covered in scars only partly healed after years of surgery, first in Greece and then in France, thanks to a large crowdfunding campaign over the internet after an appeal by the daily Libération.

As soon as she was able, she kept her promise made after that terrible Christmas Eve of 2008: to fight for the rights of the most humble workers, those cleaning houses and offices, carers, baby sitters etc. In fact, as a rapporteur for the European parliament’s Committee for the rights of women and gender equality, in April 2016 she wrote a strong report on the condition of "Domestic workers and care workers in the EU". She presented possible solutions to help them. Only in the EU 2.5 million people work in this sector, of whom 9 out of 10 are women and most are migrants. They are often undeclared because few countries recognise them for regular legal contracts with the necessary controls. If you don't "exist" then you are not protected. Often these women have accidents while working, work night shifts without pay, or are even molested and blackmailed with threats of retaliation against their families if they do not accept sexual abuse. And we Europeans trust them with those who are most precious to us, our children and our old folk.

The solutions Konstantina proposes are aimed at bringing this work into the open and ensuring that it is given dignity and recognition both legally and socially in EU countries. These have been adopted by the European parliament on April 28th 2016, but still need to be approved by the European commission which could send recommendations or binding directives to single member states. Meanwhile, we asked Konstantina a few questions.

Where do these women from the Old Continent find life better – or where do they find it worse?

A model country for this could certainly be France, where if a family hires a “nounou”, full time or part time babysitter, they can have a tax reduction. This helps bring out undeclared work. It means access to healthcare and education to thousands of "ex-slaves". But it has taken 15-20 years of social and psychological education for the French to understand that the fight against exploitation is better for all.

Where are these workers worse off? In all other EU countries where there are no such regulations. This includes Germany, Spain and Italy, even though they have made some attempt to improve conditions. For example, Italy is the only country which has shown interest in our report on “Domestics and care workers in the EU” of the European parliament (it came out during a political debate on how to substitute or change the vouchers for occasional work).

With regards to Italy, a few day ago the Guardian published a report on the exploitation of thousands of seasonal workers from Romania in crop fields in Sicily. Not only were they irregularly working, but they were also forced to have sexual relations with their employers under threat of being fired. The “reduction to slavery” applies to female migrants working in various sectors. Let's not forget those women who arrive in Italy with the promise of work as house employees, but who are then thrown onto the streets by criminal organisations to work as prostitutes...

If possible, this is even more shocking as Romania has been part of the EU since 2007, therefore these women are, to all effects, European citizens. On the other hand, when I was attacked in Greece, Bulgaria had been an EU member for one year. The only way for these women to get help is to unite in a union or contact one. I did and I paid the price. But the union where I fought in Greece still exists and now, in spite of the crisis, many of my ex-colleagues have legal contracts.

Mrs. Kuneva, the Tsipras government in Greece which supported you for election in the European parliament is now in serious trouble. Opinion polls show that if voting was held now, New Democracy centre-right party would win by about 15 percent over Syriza. If you are no longer elected to the European parliament what would be your plans? You were born and grew up in Bulgaria, then you emigrated to Greece, for years you were recovering in France where your son is finishing high school. Which country would you like go “back" to?

Probably to Greece. Also my son who next year will go to university in England where he has been accepted in a bio-technical faculty. His dream is to help people like me who have lost the use of part of their body, by creating new prostheses and advanced apparatus. But one thing is certain. Wherever I go I shall continue my work for an inclusive society based on solidarity, for a Europe where discussions are about human rights and not only about economy and finance. And the Balkans are the area where most work needs to be done.