Is the EU's asylum system ready to welcome Ukrainian refugees? 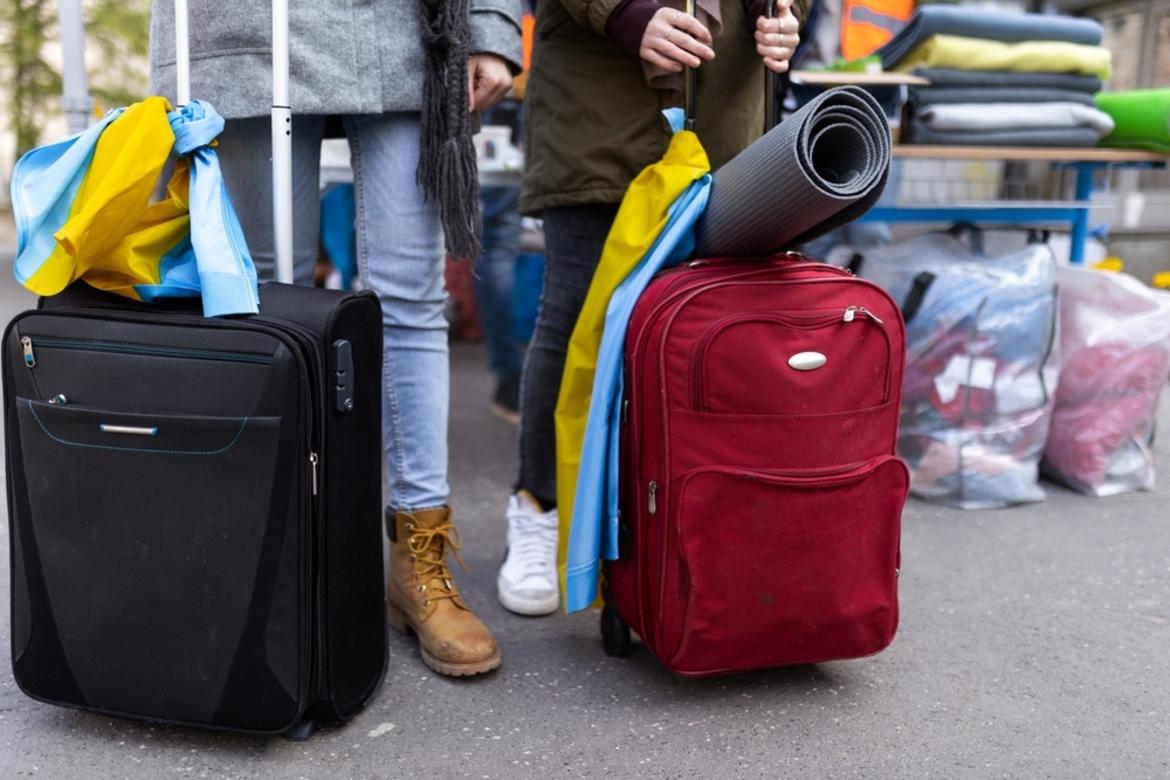 Ukrainian refugees now enter the EU under the aegis of the ultra-fast special protection system, but regular reception centres across the Union are piling up hundreds of thousands of applications and rejecting many. EU members states' asylum systems average more than 15 months of delay

“The breakdown is brutal,” says Virginia Álvarez, spokesperson for Amnesty International in Spain and immigration expert, of the asylum reception system in Europe, which is now preparing to receive millions of Ukrainian refugees. That breakdown can be translated into numbers: at the end of 2021, EU member states had almost 760,000 asylum applications pending resolution.

How much is that? Well, considering that in December they received just over 60,000 applications in total, it’s quite a backlog. Those almost 760,000 pending files are equivalent to the number of applications made in the last 15 months. That same asylum system must now handle a good portion of the almost 4 million refugees who, according to United Nations data , have left Ukraine since the Russian invasion in February 2022.

“There has never been the slightest political will on the part of any European country to comply with its international obligations towards refugees,” Álvarez says. Yet it is possible to distinguish between bad practices. Of the 758,920 pending asylum applications on 31 December of 2021, more than 500,000 were in just three countries: Germany (more than 264,000), France (more than 145,000) and Spain (more than 100,000). Those countries also receive the most applications. Even so, their backlogs in terms of time are considerable: an average of more than 19 months pending resolution in Germany, more than 17 months in Spain and almost 15 months in France.

Ireland, with a more than 29-month average delay, Cyprus, Malta and Finland all have worse bottlenecks. Greece, Luxembourg, Belgium and Sweden have shorter delays that are still over a year long.

“There are so few [civil servants] and so many of us arrived,” says Venezuela refugee Carmen Caraballo, who arrived in Spain in 2018 and did not get asylum until a year and a half later. The staff shortage explains the delay in getting an appointment or resolving applications like hers, she says: “You have to wait in long queues, like food queues, but for papers.” Caraballo was able to get into the Spanish host system. Not everyone is so lucky: while waiting for the red card, as the work permit is called, many asylum seekers work in the black market to survive.

The colours red and black bring bittersweet memories to Nicaraguan refugee Georgina Molina, because they represent both the long-awaited Spanish work permit and the Sandinista regime from which she fled. She left Nicaragua after police tortured her. “Horrible, horrible, horrible. It’s one of the things I’ll never forget,” she says. She still struggles to keep her composure around government agents due to the treatment she suffered in her country along with two companions. When a Spanish plainclothes police officer delivered her asylum documentation, she burst into tears. “The asylum process has been an odyssey. I feel that I had already lost my status as a person. You feel like a cockroach, you feel like garbage, you feel like a rat,” she says. After three long and hard years Molina obtained asylum in February 2022.

Today, Molina believes that there are many aspects of the asylum process that Spain could improve, such as the lack of “human rights training” and a “minimum humanitarian touch” on the part of those who help people in the vulnerable situation of applying for asylum. Caraballo, the Venezuelan refugee, says: “Policemen in the queues are not respectful because they shout. The civil servants, inside, are more aware. I imagine that they have heard so many stories.” The person who interviewed her for the second time started the conversation by mumbling “another one” she says, her voice cracking, and it broke her, she says. “I don’t want to be sitting here. I want to be in my house, on the other side of the ocean, working, with my family.” The odyssey leads many people to try to get appointments by any means, including buying slots for about 80 euros, a very different situation from the one organised now to welcome Ukrainian refugees.

A special and unprecedented system

Ukrainian refugees fleeing war can enter the EU under a special protection system activated by a European directive  on 4 March. This system, regulated in a 2001 directive  but which the EU had not activated until now, establishes near-automatic asylum for Ukrainians and residents who were there before February 24 (although it allows and encourages member states to extend this protection to other affected people). It provides residence permits, work permits, accommodation and education for minors with minimal, streamlined procedures.

In Spain, for example, the law guarantees special protection asylum papers within 24 hours of application. The problem is that the already overwhelmed reception system just turns in-person queues into virtual queues waiting for an appointment to apply for asylum.

In any case, this special fast-track route makes it possible to avoid two traditional problems of asylum applications: the delays, which in the ordinary system take months, and the low percentage of approved applications. “This is the first time we have seen something that human rights organisations have been demanding for years,” says Álvarez, the Amnesty spokesperson, because “Europe has always behaved like a fortress.” She compares this special protection to the treatment of other refugees, such as Syrians or more recently Afghans on the border between Belarus and Poland. “There are people from Mali who arrived in the Canary Islands and have had to wait eight months just to submit their asylum application,” she says.

“It’s great to see that, when you want to, you can,” Álvarez says. The special system will also have an impact on all those pending applications. “Of course, it’s going to affect them,” she says.

Molina, the Nicaraguan refugee, also welcomes the special system: “What they are doing with Ukraine, and more things they should be doing for them, is what I think they should do for everyone.” She cannot help but think about the differences and blame territorial proximity and skin colour: “It is easier to be empathetic with another white person than with a person from the Southern Cone. I do believe that there is institutional and social racism.” Caraballo, the Venezuelan refugee, says “it is necessary” that Europe has acted with swiftly in the case of Ukraine because “they are killing people.” In her opinion, the speed with which the people displaced by the Russian invasion are hosted “can help because, since they know how to speed up the Ukrainian issue, they can speed everything up. That would be the ideal.”

In fact, apart from the nationalities of applicants, there are significant differences between receiving countries: from 2008 through the end of 2020 some 67,110 Ukrainians sought asylum in the European Union, but only 18.7% obtained it. The most stringent countries were Croatia, Bulgaria, Luxembourg, Latvia and Slovenia, which did not approve any applications. Germany (6%) and Spain (8%), two of the countries that received the most applications together with Italy, were also not too generous with Ukrainians. On the other hand Italy accepted almost 45%, surpassed by Malta (58%), Estonia (more than 68%) and Portugal, which approved 78% of applications.

Migration and legal scholar David Moya of the University of Barcelona calls the special system, approved in just a couple of days, “unprecedented.” He says European countries considered it during the 2014 invasion of Ukraine and rejected it. He also notes that both Poland and Hungary, which now lead the way in welcoming Ukrainians, refused to accept a European quota system for refugees of other origins not so long ago.

“The argument is that this time there is a war in Europe, and that this is enough to justify a different treatment between this case and the other ones,” says Virginie Guiraudon, a researcher at the Centre for European Studies and Comparative Politics at Sciences Po Paris.

The lack of resources to accommodate the millions of displaced people from Ukraine also poses serious risks. “We realised that human trafficking is an issue. Human traffickers have appeared,” says Viktória Hováth, spokesperson for Migration Aid, an NGO that has opened a shelter in Budapest for 300 people, according to Kata Moravecz from Hungary.

In these circumstances, family ties or support networks are essential for those fleeing the conflict. “Some friends took us from the railway station. We were in the hands of local people but many people here don’t know anybody. That’s why they are lost, that’s why we are here,” says a young woman from Kyiv, Ukraine, who helps other refugees facing language barriers and the uncertainty of where to go next. “There are people who have networks, which are fundamental, but what about those who do not have them?” Álvarez asks. In one of the Ukrainian refugee reception centres in Spain, some Ukrainians volunteer to help their own family members.

In addition, both Álvarez and Moya predict that refugees from Ukraine will continue arriving. “At the least we must assume that this will last six months or a year,” Moya says. Those who have just fled, like the young woman from Kyiv, dream of returning as soon as possible: “As for today, we are not planning, we are staying here like a tourist. I am really sure we will not be needing to work because we’ll leave in two, three weeks, maybe a month.” It is the same feeling that Carmen Caraballo had when she arrived from Caracas, until a Venezuelan acquaintance snapped at her: “Comrade, open your eyes: you will not be able to return now.” Addressing those seeking help in Europe will be complex given the overwhelmed system, which needs many different resources, and not just in the short term. “It’s not just giving them a welcome bag and taking your picture with them,” Álvarez says.

The original article has been published by Civio  within the European Data Journalism Network and has been produced with the collaboration of other members of the network. Details on the methodology followed can be consulted here (at the end of the article) .