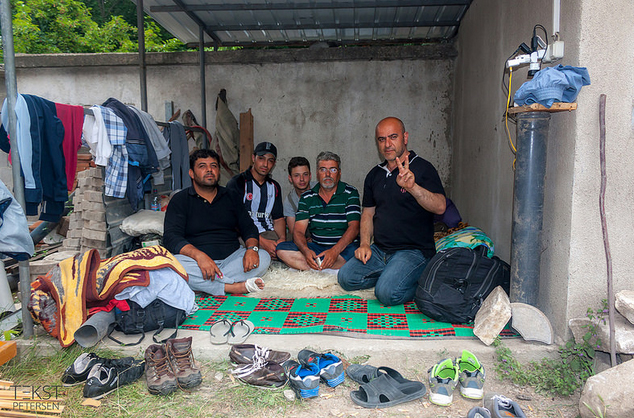 The path of the migrants towards the EU is full of risks. Following the Balkan route, the 200 km crossing Macedonia can be the most deadly. Our report

"Refugees are people like anyone else, like you and me. They led ordinary lives before becoming displaced, and their biggest dream is to be able to live normally again," said Secretary-General of the United Nations Ban Ki-moon celebrating 20 June, the World Refugee Day.

On the road of around 4,000 kilometers that migrants from Syria, Afghanistan, Pakistan or African countries have to pass to reach the EU, the 200 kilometers through Macedonia are especially exhausting and full of dangers. For years Macedonia was, and continues to be, a transit country for migrants that dream to reach the EU. But after Channel 4 report that “hundreds of migrants at a time are being held by a kidnapping gang at a house in Macedonia”, their destiny was again in the focus of local media and NGOs. The report stated that about 300 migrants were locked inside a few small rooms with blacked out windows and held for ransom. If they wanted to continue to the EU they had to pay anywhere from 500 to 1,000 euros. “The house was patrolled by armed guards 24 hours a day. Beatings were frequent. Food was scarce,” said one of the locked people that managed to escape.

One of the main reasons that lead to this horror story was the asylum law that was enforced in Macedonia until a few days ago. But fortunately, after the vast pressure by the public, human rights activists and NGOs, the government changed the asylum law on Thursday, 18 June 2015, allowing migrants to apply for temporary asylum at the border or at the nearest police station.

Under the old asylum law, migrants were not allowed to use public transportation nor was it allowed for the citizens to offer them transport. Once they applied for asylum, only then it was possible for them to use public transportation. But Macedonia was never their final destination, therefore they never applied for asylum. According to some migrants, the other reason for not applying was their belief that if they applied in Macedonia they would have lost or diminished their chances for asylum in the EU. In this circumstances, the only option left for them was illegal transit through the country, leaving them vulnerable to criminal groups and the dangers of the road.

So far, migrants used three ways to cross Macedonia. The first, and most dangerous for them, was to follow the railway road from the southern border with Greece all the way up north to the border with Serbia. Up to day, this was the most dangerous route. According to the local media, at least 28 people have been killed by trains since January 2015. Two months ago, near the town of Veles, 14 migrants, part of a group of around 40 people, were hit by a train while walking along the railway track. This was the biggest accident to day. Tired, not aware of the terrain configuration, or simply sleeping on the railway tracks, trains were their constant nightmare as a lot of migrants ended their journey to a better life on the tracks. “Driving the train here has become a nightmare… I often wake at night in a sweat after dreaming that I ran someone over,” says to a BIRN reporter, Daniel, a train driver, as he slowly starts his train after stopping at the station in the central town of Veles. “We are currently going at 30kph”, Daniel says, “although normally by now we would have reached 60 or even 80.” “If we speed up, we risk hitting them. If we drive slowly, we risk some of them coming on board,” he explains.

The second option is to pay money to the people smugglers who use migrants despair to make profit. But this leaves them vulnerable to the criminal gangs like in the case of the Channel 4 reportage. A few weeks ago police discovered 160 migrants in a sealed railway car in Skopje. They had paid 50 euros each to be smuggled from Greece to Serbia. Also, a few days ago the police arrested 12 people and is looking for five more suspects for illegal migrant trafficking. In the search conducted in 11 houses in the villages near the town of Kumanovo, the police found around 150 migrants among which a baby, one and a half years old. Smugglers, 16 from Macedonia and one from Bangladesh, charged from 600 to 1.000 euros per person. During the search, the authorities found two guns and around 20.000 euros in the houses. “The number of robberies on migrants is constantly rising. In the first five months of this year, there have been 12 registered thefts, half of them happened in the Kumanovo area,” says Interior Minister, Mitko Cavkov. Just for comparison, last year there have been eight registered burglaries overall.

The last, but most popular way these last few months, before the law was amended, was cycling through Macedonia. According to the old law, migrants were not permitted to use public transport, but they were, however, allowed to walk to their destination. It was everyday scene to see migrants cycling to a better life.

In a few cases there were police officers suspected to be involved in migrants smuggling, but it appears that most of the time the Macedonian police turned a blind eye to the migrants, or even helped them to cross the country through safe routs. However, there was no State organized help for these people. But, if the State authorities were deaf and blind for the migrants’ misery, common people were not.

Lence Zdravkin, from Veles, referred by some media as modern Mother Theresa, helped migrants that were passing by her house. Living right across the main railway station in Veles, the main migrant transit route in the past years, she could not stay steady as people were suffering. For more than a year, before any big news outlet even knew or reported about the migrants problems in Macedonia, she helped them trying to ease their pain offering food, drinks, medical help and shelter to sleep. She welcomes the new asylum law that will allow migrants to have temporary asylum up to 72 hours, enough time for them to travel legally through the country. With the new changes, also, they are allowed to use public transportation, trains and buses to reach their destination.

“Remembering all the impressive human stories, and the troubles of the people passing by the house, I can only say that it is our duty to help them. I remember one family, who told me that all their children were killed in Syria, or the case of one torn apart family that we helped reunite. There are a lot of heart breaking stories that it would take me a week to tell them all,” says Lence. From the migrants stories, she confirms that a lot of bad people are using their trouble to make personal profit. “They are robbed, attacked, beaten by gangs.”

The Macedonian government, overwhelmed with the political crisis, the protests and the attack on Kumanovo, totally forgot or ignored the migrants' problems. Suad Missini, a human rights activist, went on a hunger strike for a few days in front of the Parliament, demanding the urgent adoption of the changes of the Asylum law, and concrete measures by the Ministry of Interior to safeguard the life, security and possessions of refugees passing through Macedonia. Also, Missini asked for the immediate liberation of all refugees and migrants detained in the Gazi Baba center, and its immediate closure. Two out of the three demands were fulfilled, but the last one is still an open question.

This issue was also raised a few months ago during the third period report of Macedonia on its implementation of the provisions of the UN Convention against Torture and Other Cruel, Inhuman or Degrading Treatment or Punishment. The Gazi Baba Reception Centre for Foreigners, located in the capital city Skopje, reportedly had appalling conditions and was one of the most problematic institutions in the country. “Asylum seekers were held in darkened and dilapidated rooms. Unaccompanied children were placed in the same room as adult men and left alone there to defend themselves. The Reception Centre featured grossly overcrowded dormitories, sometimes exceeding 200 persons, there was a serious shortage of beds and many migrants were compelled to sleep on the floor without a mattress. There were reports of inter-migrant violence, clashes between different groups and a series of allegations that migrants were being ill-treated by custodial staff,” said an Expert.

“The reception centre for foreigners has been partially renovated. It has been painted and measures have been taken to improve the hygiene facilities,” said Ilija Ristovski, Secretary of State at the Ministry of Justice, noting that the Government was searching for another facility to be used as a reception centre that would satisfy all international standards.

The official data say that in 2012, 638 persons applied for asylum in Macedonia, and none were granted. In 2013, the Republic of Macedonia received 1,323 applications for asylum, none of which were accepted. In 2014 there were 1,246 applications for asylum, of which 11 persons from Syria were recognized and granted asylum, and one person from Ukraine was placed under subsidiary protection.

The Interior Minister Mitko Cavkov said that the number of migrants has tripled since last year, with 2,000 to 3,000 people trying to enter every day.

But this is not the end of the migrants suffering on their way to the EU. Maybe those 200 kilometers are now safer and can be passed faster, nonetheless having in mind the latest information from Hungary that the government has ordered the closure of the EU country’s border with Serbia, and the construction of a fence along the frontier to keep out migrants, we are facing more sad migrant stories banging on the wall of the fortress Europe, as the Asian Dub Foundation named it:

…We got a right, know the situation

We're the children of globalization

No borders only true connection

Light the fuse of the insurrection

This generation has no nation

Grass roots pressure the only solution

Cos asylum is a right…