Citizens and democracy threatened by SLAPPs: preview of the draft resolution

Synergies and training are needed against SLAPP, or gag complaints 08/07/2022 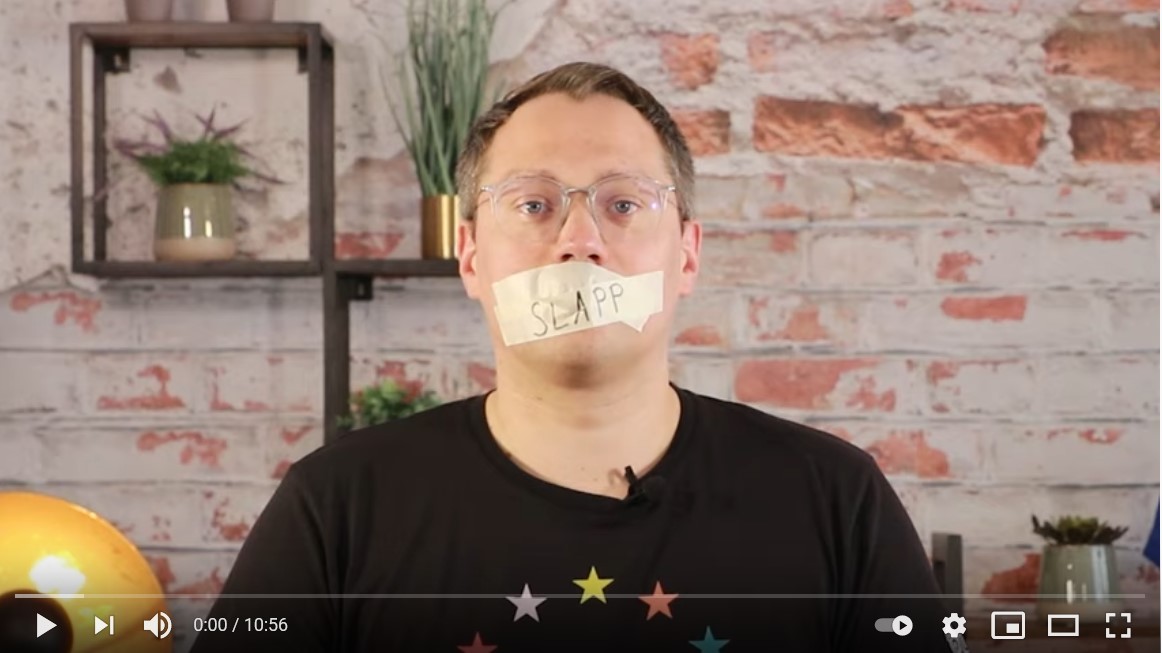 Screenshot of the anti-SLAPP video by MEP Tiemo Woelken, rapporteur of the initiative report (INI) stimulated by the CASE coalition

The CASE coalition of which OBCT is part has received the text that will be presented to the European Parliament next Monday: a commitment to defend the rule of law and public participation, which collects many suggestions and proposals from civil society organisations

Not just lawsuits, not just journalists: the work of the MEPs who will present a draft initiative report (INI) in plenary session next Monday is showing a broader and more inclusive idea of SLAPPs, or gag complaints.

The first draft of the motion that intends to promote a resolution of the European Parliament, a draft that we received in preview together with the CASE coalition, often cites rule of law and democracy, participation and pluralism, and understands SLAPPs (strategic lawsuits against public participation), legal actions aimed at hindering and polluting democracy, as one of the many abuses and constraints of the rule of law.

The approach of the European Parliament's Committee on Legal Affairs (JURI) and the Committee on Civil Liberties, Justice and Home Affairs (LIBE), which jointly launched this initiative to stress the call to the Commission to legislate on the subject, moves from an overall vision of the mechanisms that regulate democracy and the rule of law, framing freedom of the press in direct relation with the democratic participation of citizens: "independent journalism and access to pluralistic information are key pillars of democracy; whereas civil society is essential for any democracy to thrive”, reads the draft resolution.

The draft collects and summarises the results of weeks of meetings and consultations of the two rapporteurs with various civil society actors in many EU countries, including the CASE network (coalition against SLAPP in Europe) of which OBCT is also a part. The online meeting at the beginning of June, during which OBCT presented a synthetic overview of the Italian case, was for example a direct and very productive dialogue. Both rapporteurs, German Tiemo Wőlken and Malta's Roberta Metsola, showed interest and a willingness to investigate also the human aspects of the abuse of legal instruments. "I myself am a lawyer – said Tiemo Wőlken – and in my profession I never realised how much we can become an instrument of intimidation and violation of fundamental rights". The Maltese colleague recalled that she was very impressed by the meeting she had a few days earlier with the leaders of the FNSI and Article 21: "The size of the problem in some EU countries is truly alarming".

Hence, probably, the emphasis on the fundamental values of the Union and on the need to integrate any possible measure with other instruments already in place; the draft reads: "Union level measures to combat SLAPPs should be complementary and consistent with other available tools, such as the mechanism for the protection of democracy, the rule of law and fundamental rights, policies on combating corruption and current financial programmes to support civil society and justice systems".

Strategic Lawsuits Against Public Participation (SLAPPs), which this initiative of the European Parliament wants to oppose, are lawsuits or other legal actions (e.g. injunctions, asset-freezing) based on civil and criminal law, as well as the threats of such actions, with the purpose of preventing reporting on breaches of Union and national law, corruption or other fraudulent practices or of blocking public participation; often relating to cases of environmental protection, financial fraud and/or corruption, where they constitute a clear attempt to delay publication of information by halting or discrediting the work of individual journalists and publishing entities, hence depriving citizens of their right to information.

A workshop to learn about the various implications of SLAPPs for perpetrators and victims, a moment of knowledge and self-defense: on Monday 28 June OBCT offers a seminar with Linda Ravo, an expert in community law, and lawyers Nicola Canestrini, Giulio Vasaturo, and Elena Biaggioni, to understand how abuse of the law affects activists, human rights defenders, and journalists. There will also be Chiara Sighele, director general of the ICC, and Francesco Martone, spokesperson for the network In Difesa Di.

Significantly, the acronym SLAPP, which has recently been adopted in Europe as a synonym for “gag complaints”, is identified as “a direct attack on the exercise of fundamental rights and freedoms”. The motion proposal invites the European Parliament to call for the next Rule of Law Report "to include a thorough assessment of the legal environment for the media, and investigative journalism in particular", given the close connection between right to be informed, investigative journalism and any abuses that by limiting the free exercise of journalism have a heavy impact on citizens' freedoms.

The draft then links SLAPPs to their effects on the internal market (for example, when campaigns to report corruption are blocked), on the judicial system (burdening courts with claims which are later dismissed as abusive and lacking in legal merit) and on hate speech. SLAPPs are based on blackmail, intimidation, coercion to silence, and "suppress participation in democratic life". The urgency of legislative action by the Commission is proven by the fact that no European country has rules that are suitable for deterring abuse of the law. Funds are also needed to support victims, "support independent bodies that can hear complaints and provide assistance to victims", but also "adequate training of judges and lawyers", who must be able to recognise cases in which freedom of expression, public interest, participation are at stake.

There is a lot of expectation in the world of organisations that deal with human rights and democracy, but there is also a lot of satisfaction, as this draft motion is clearly the result of a pressing awareness campaign aimed at MEPs: months of reports, meetings, e-mail exchanges, hearings seem to have given important results.

Of course, the topic is not present in the same way on the agenda of all MEPs, but those who have dealt with it, talking with the children of Daphne Caruana Galizia, participating in CASE meetings or reading the materials provided by various NGOs, must now take concrete actions. The German rapporteur made a video  that has over 1700 views, hosting Matthew Caruana Galizia and also Karl Bär of the Umweltinstitut of Munich, on trial in Bolzano for the case of the South Tyrol farmers, and now hostage of bureaucracy.

The situations are diverse and numerous. "It is necessary to collect data on SLAPP cases and raise awareness about the detrimental effects of SLAPPs", reiterates the motion, which will be presented in plenary session on Monday and which will be voted no earlier than October.