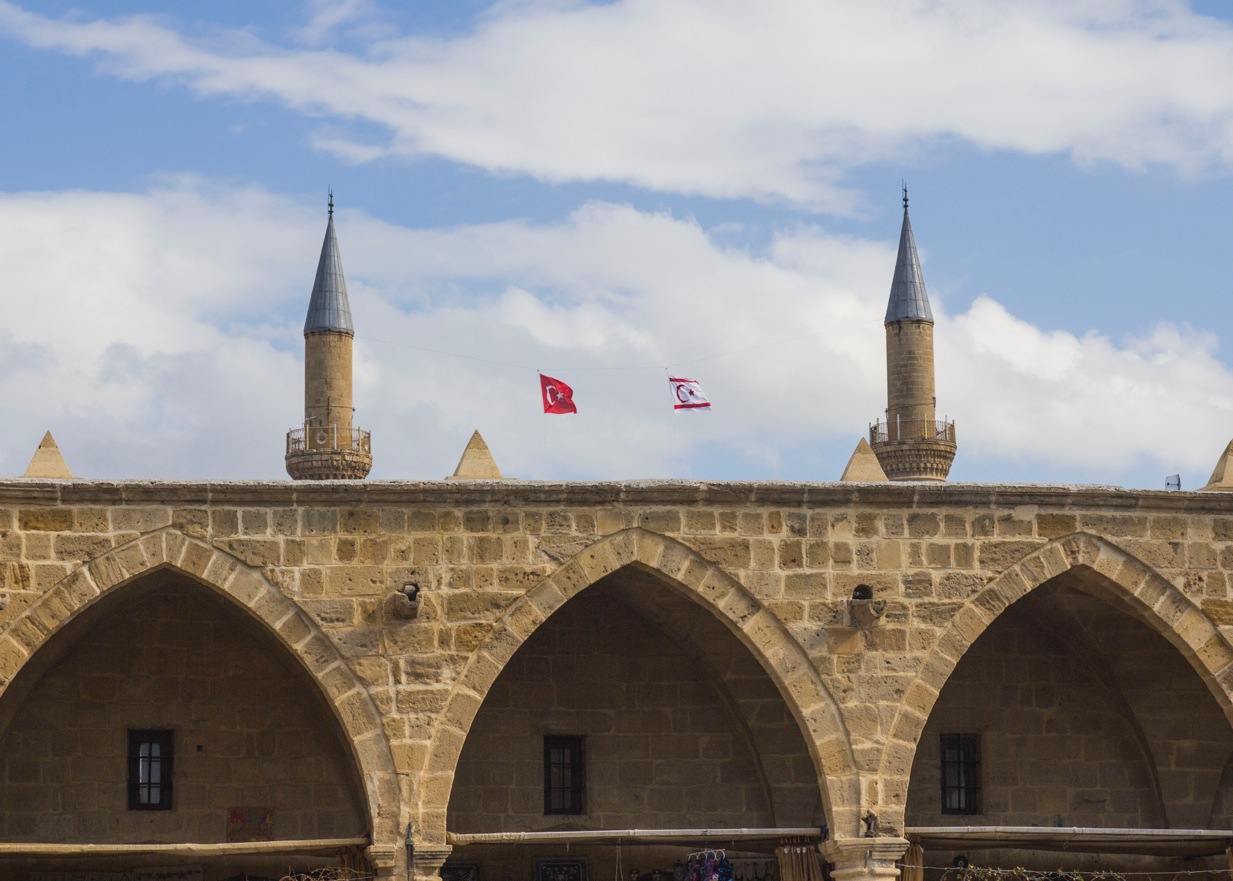 In the shadow of the ever present division of Cyprus, the Greek zone and the Turkish one hide hybrid realities which timidly try pass the division's rigid schemes

“You know, this is the first time I've come here. I've often ordered food, but always through someone else. Today I'm here myself, for the first time”. With his hands in his pockets and his collar turned up, Dimitri waits for the waitress at Mey-Han, a tavern with traditional Turkish-Cypriot cooking, to bring him the menu. Outside, the square in front of the caravanserai “Büyük Han” is swept by a cold wind which forces the customers to quicken their pace and hurry into the cafés.

“Thanks”, says Dimitri in English, after ordering his take-aways. Then he too, tightly buttoned into his coat, quickly crosses the short paved tract and dives into the bar opposite. The kebabs, flat bread and salad, arrive just after him, together with humus, yoghurt sauces and chips. In a flash all those in the bar, about a dozen of various nationalities, go for the nearest dish, and suddenly silence prevails round the table.

If it were not for where it took place, this scene would have no particular value – just a simple evening with friends in a café without a kitchen, which gets its supplies from a nearby restaurant. Between drinks, you have to eat something.

In this tangle of streets which make up the oldest part of Nicosia, these scenes tell a different story in which local happenings are full of meaning. Within the star-shaped walls built (in vain) by Venice to defend itself from the Ottomans, the Cypriot capital is crossed by the same “green line” that divides the island in two, likewise separating the city into two twin entities: Lefkosia for the Greek-Cypriots and Lefcoşa for the Turkish-Cypriots. Like the map, social relations also inevitably suffer this separation which has now lasted for over 40 years, turning Dimitri's short run to the Mey-Han into an expedition, as he cannot help noticing himself.

Dimitri Podaras is in fact a young, thirty-year-old Greek who has been living for just over a year in this street in North Nicosia, that is the “Turkish part”. “I came to Cyprus in 2006 and planned to stay only a few months, time to put away some money for a trip to Botswana...Whereas I stayed”, Dimitri says smiling. “I worked mostly in Limassol, in hotels, bars and clubs until Simon got in touch telling me he wanted to open a café in Nicosia”. A long standing friend of Dimitri, Simon Bahceli is the owner of the bar where we are now. With a Turkish-Cypriot father and British mother, he was born in the UK and moved to the island in the early 2000s, working as a journalist for Reuters and for the Greek-Cypriot daily, The Cyprus Mail. At 50 he decided to open the Hoi Polloi (in Ancient Greek “the masses”), a café that from late 2015 has employed Greeks, Turks, Cypriots from both communities and foreigners, serving customers who are likewise from all over.

If 2016 was not a turning point in the negotiations for the reunification of the island, as the international community had hoped, it was a turning point at least for this small café in North Nicosia. “I don't know if it was our presence that suggested the council take action, or if we just arrived at the right moment when the authorities were starting to take an interest in the old town, but the fact is that the street has been lit up every evening and cleaned every morning for some months now”, Dimitri tells us.

In the usually shabby, dark part in the north of the capital, this is not a small thing. A year ago, though, fitting into the reality of Nicosia was not exactly simple. “There is certainly a lot of nationalism and not much spirit of openness in these parts”, Simon admits, remembering how shopkeepers did not at first appreciate Hoi Polloi's success nor its customers. “There were always a lot of homosexuals and hippies coming and going here at our place… Let's say it took a while for them to accept us”, concludes Simon, pushing back his long blond hair to the side of his face.

Dimitri's nationality was another obstacle to overcome. “An added value” jokes the young Greek, “another cause for tension, but it really only added to the true source of conflict – the fear of commercial competition”. As the months passed and thanks to the fact that the café's success brought customers to nearby restaurants too, Dimitri's origin became a secondary concern. “They've understood we're respectable people, though I can't say the problems are over”, warns Dimitri, “on the contrary, I have the feeling that without the authorities' support and without policies going in the same direction, this society will be very difficult to change”.

Just a few metres from Hoi Polloi, walking south, you come to the checkpoint at Ledra Street, a pedestrian crossing place which, since 2008, runs through the two parts of the old town. Showing a document to bored policemen you can cross the “green line” at any time of day or night, still staying within the Venetian ramparts. Decidedly more lively and developed, the southern part of Nicosia is the only one to be internationally recognised since 1974, that is when the Turkish army invaded the island in response to an attempt at its annexation with Greece. The different directions taken then by the two sides of the country are reflected clearly in the two halves of the capital, divided not only in the administration and the language, but also in terms of currency (Euro in the south, Turkish lira in the north) and even in “time”, since from October 2016 Turkey (and consequently north Cyprus) has no longer applied daylight-savings time. Less than a hundred metres from the windows of the Hoi Polloi you have to wind your watch back an hour. 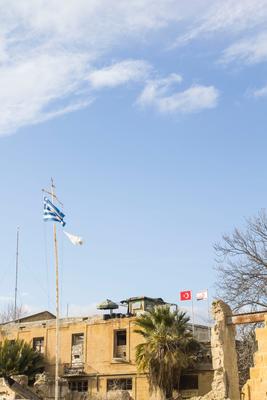 But despite a greater openness to the outside world and its superior wealth, the area south of the boundary is unable to avoid the nagging question of the division, which hangs like a pall over all everyday activities. “Nicosia is the last divided capital in Europe”, is written on the site of the municipality, which paradoxically transforms this pompous definition into a sort of tourism slogan. “When you are born and grow up in a de facto divided city (from a separation which took place long before we were born), this 'abnormal' situation becomes part of your reality and daily life”, say the young people of “Use-it Nicosia”, a group of seven Greek Cypriots and a Belgian aged between 25 and 32 who in 2015 founded “a map of Nicosia for young travellers, made by locals”. “There are restrictions on mobility, questions still open on property and legal implications which do not exist in any other European country”, they continue, before anyhow describing themselves as “very happy to see the positive changes which are coming, like the fact that people from both sides are meeting for work, for fun or to interact”.

In the map they created, which has already run to a second edition, Demetra, Savvas, Pantelis and the others offer travellers the discovery of places they frequented as adolescents: the liveliest bars, reasonably priced take-away restaurants, the best places to kiss and the urban legends and myths in circulation. Neither is the “Cypriot question”, as it is called in diplomatic jargon, avoided; on the contrary. “Cooperation is the most important thing”, write the authors of the map, suggesting visitors to Nicosia to try the Home Café, the bar and self-service restaurant in the cultural centre Home for Cooperation (H4C). H4C opened in 2011 in the so-called “buffer zone”, the no-man's land situated between the two boundaries. Among the manuals on peace-building, books on the history of Northern Ireland, South Africa and Yugoslavia, customers can get an idea of what it means to reconstruct dialogue after a conflict. The atmosphere may be a bit artificial, but the good intentions are there.

With this good lead-in, it comes as a surprise then that the alternative map of Nicosia stops at the “green line”. The northern part, including that contained within the old wall, is not given any space. “We didn't intend cutting out part of the town”, confirm the eight authors of Use-it Nicosia, “but we'd only just begun to make phone calls to draft the project when we realised it's illegal even to name the 'new' roads (renamed after 1974) in the northern part of the town”. Our authors say they have Turkish Cypriot friends and that they have been “to the other side”. On the map they have also clarified they “don't know the northern part well enough”, mainly because until 2003 they could not set foot there, so they do not wish to write about something they know too little of. A few hundred metres to the north, those lines and that half-finished map would probably make Dimitri snort impatiently, being the kind of alternative, underground project he would have liked to be part of.

As evening falls on the southern part of Nicosia, a man pushes his cart to the top of Ledra Street, the busy café-lined street, just starting to liven up. His name is Elias and he is one of the “urban legends” the eight young mapmakers have decided to share with travellers. From his small mobile kiosk Elias sells hard-boiled eggs, salty cheese pastries and small rounds of bread covered with spicy meat. He pulls one out of his cart, squeezes some lemon over it and wraps it in grease-proof paper. “It's a lahmacun”, he explains simply. A “Turkish pizza”, as it is otherwise known. One of those specialities which, both in the south and the north, conclude the long evenings that last till dawn.