Myths and legends of contemporary Chechnya 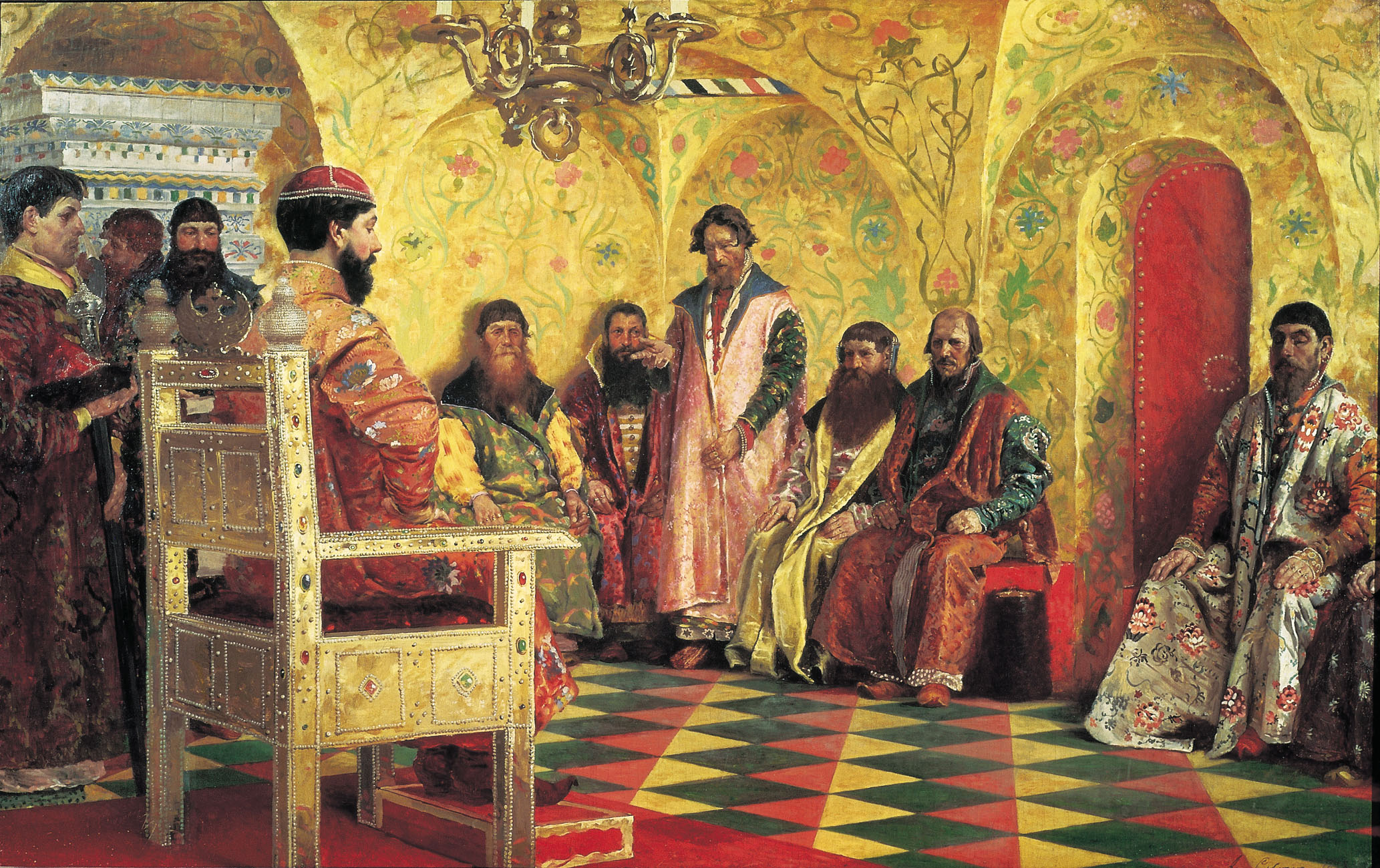 The tsar and the boyars (wikimedia )

In the age of the Russian Empire, people used to believe the tsar was good and the Boyars were the evil exploiters. In Stalin's times, many believed the leader was good and wise and that his corrupt underlings were responsible for cruelties he did not even know about. What about now? What legends circulate in Kadyrov's Chechnya?

In the early stage of the war, Russian then-prime minister Putin told a joke in Chechnya that became very popular. On New Year's Eve 1999, Putin arrived in Chechnya to cheer up the Russian soldiers who had been struggling unsuccessfully for months to take Grozny. “So, guys, shall we take these rebels out?”, he asked, jokingly. “Sure, we shall!”, the soldiers shouted back, also jokingly.

That very night, while Putin joked with the soldiers, Yeltsin announced his goodbye to politics and laid the ground for Putin's presidential career.

That was over ten years ago. Since then, Putin managed to become president, then prime minister again, and is now, once more, Russia's future president. Many a Chechen rebel have been taken out, but not all of them. That joke is no longer funny, as most jokes have a life-span depending on the context. In today's Chechnya where critiquing power involves risking one's freedom – and often, life – , other jokes are being invented and myths and legends are being made up to cope.

Soon after coming to power, Kadyrov showed his iron-fisted style of governing. Among the first victims of Kadyrov's house cleaning was the minister for Education, formerly appointed by Kadyrov senior. To be honest, he was thought to be involved in several corruption cases and few regretted his departure, but one of the first stories about Kadyrov has to do with this firing. Allegedly, when the president summoned him, the aged minister tried to soften Kadyrov up by saying this: “Ramzan, you can remove me from my post, but you cannot remove my love for your father Akhmat from my heart.” Nothing in the story reveals anything about Kadyrov junior's reaction: it is only known that the minister's shameless profession of adulation did not save him – he was still fired and allegedly forced to "take a bath" in the fountain before leaving the president's residence.

Since then, stories of ministers being beaten up, humiliated, and insulted have been circulating. Last summer, for instance, the capital's mayor – once among Kadyrov's favourites – was rumoured to have fallen from grace. Quoting well-informed staff of the mayor's, Chechen people told each other detail after detail on the “fall of the mayor”. According to the rumours, Kadyrov was informed of the mayor's corrupt administration and, notably, of his leadership ambitions, close relations within Medvedev's circles, and hopes of becoming the new Kremlin favourite after the next presidential elections. This was before the Russian Putin-Medvedev tandem announced that Putin would be president again and when it appeared that Medvedev, not yet a lame duck, would run for a second term. It is entirely possible, therefore, that these very rumours marked the beginning of the end for Grozny's mayor. And in Chechnya, political falls are just as abrupt as ascents.

According to the tale, the mayor was summoned at the presidential quarters and questioned on matters of loyalty and corruption. He obviously swore his loyalty to “dear Ramzan Akhmatović”. But then, Kadyrov let the mayor's closest staff in. Kadyrov's men had already interrogated them and they had spilled everything – and a little bit more - about the millions in accounts abroad, the luxury house on the bank of the river Lazur, the secret, simultaneous contact with Medvedev, and even about the fact that the mayor, famous for his love of plastic surgery, had dared to mock down-to-earth Ramzan Kadyrov when he was in private. The mayor's people, their faces still bruised from the interrogation, repeated all of this in front of Kadyrov and the mayor himself. Soon, the mayor's well-groomed face was beat up too. “The world's most handsome mayor”, as Kadyrov had termed him in the beginning of their cooperation and friendship, is said to have had his life spared on the condition that he return his ill-gotten gains in the (unheard-of for Chechnya) amount of 500 million dollars.

There is no evidence supporting or refuting this story. It is only known that, right after that episode, the mayor's family hastily sold a number of properties, cars, jewellery items, and restaurants. Many even swear they saw the mayor's brother sell a luxury white Jeep at the Sunday car market.

Grozny's mayor is certainly not the only official urban legends have falling from grace in Kadyrov's eyes. In fact, similar rumours are floating around about at least half the government. For example, Kadyrov allegedly summoned the minister of culture, in the middle of the night and, without warning, asked him how much money he had at home. The minister named a modest sum. Then, Kadyrov ordered that he call his wife, set the phone on hands-free, and ask her to bring all the money they have at home immediately. The woman, unaware that Kadyrov himself was listening, vehemently protested the daunting task. “Come on, you know it will take at least three cars to bring all of it and the bodyguards already left. How can I take everything on my own?” Rumours say that the distracted minister was then "taken care of" by Kadyrov's bodyguards. In addition to losing the money, he supposedly could not stand on his feet for several, long weeks after the night's events.

The protagonists of these tales are politicians and officials as well as power-worshipping writers, journalists, and singers – basically, anyone who has risen to the Chechen Olympus over the last few years. In my view, this is related to the unashamed accumulation of wealth that characterises success in Chechnya. In the suburbs of Grozny, in ruins until recently, the castle-like mansions of country's nouveau riches spring up as if in a fairy tale. Against a backdrop of sky-high unemployment and poverty, with most people forced to survive on meagre pensions and benefits, such an enormous accumulation of wealth is especially blatant. Here, the mansion of a young starlet singing the president's praises. There, the castle of the minister of finance. There again, the residence of the minister of culture who used to go from dormitory to dormitory before being appointed. In Grozny, luxury cars speed around with the special plate “KRA”, an abbreviation for the president's full name (Ramzan Akhemtovich Kadyrov). Their owners belong to a select circle of of people not subject to the highway code – or any other rules. Rules are for ordinary mortals who are left with nothing to find comfort in but tales of disgraced favourites, expropriated ministers, and thrashed officials.

The most interesting thing is that ordinary citizens appear genuinely happy when “justice has been done”, at least with individual corrupt officials. Paradoxically, they believe Kadyrov to be unaware of his men's misdeeds and the corruption that infests every sphere of public life like a cancer. Most Chechens seem to have adopted the traditional Russian delusion of the “good tsar and the evil boyars” – they like to think that Kadyrov rushes to punish officials as soon as he learns of an infraction, just as Russian serfs believed the tsar was good and that all evil came from the boyars.

At the time of Stalin's terror, the people believed that the Father of Nations was the embodiment of justice while his underlings were responsible for purges and mass executions.

Now, after centuries of armed conflict and two bloody wars, after almost two decades of harsh struggle against Russia and everything Russian, it suddenly turns out that the two arch-enemies have some thought patterns in common.

This appears to be the main outcome of the war between Chechnya and Russia.

P.S. All the stories recounted in this article are solely rumours, myths, and legends the author was told by Chechen people. Any resemblance to real events or real persons, living or dead, is purely coincidental.