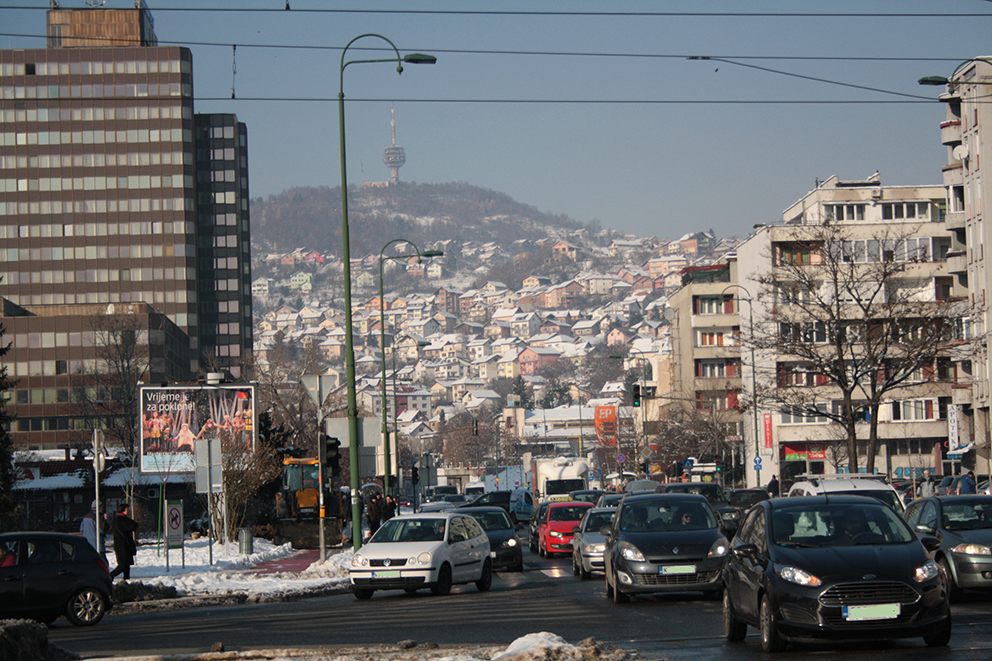 Sarajevo (photo by A. Sasso)

Between 2 and 4 December, Sarajevo was the most polluted capital in the world, at least according to data provided by US embassies, that constantly monitor the environmental situation of the cities where they are based

It was a winter Sunday like many, when Sarajevo people normally wait for the warmest hours to take a walk in central Ferhadija street or in relaxing Vilsonovo, the pedestrian boulevard that runs along the Miljacka. On the afternoon of December 3rd, however, some figures began to bounce on the social networks of all of Bosnia and Herzegovina and in the agencies of half Europe, inviting them to postpone the walk. Figures ranged between 300 and 400, reaching the record-value of 428 in the late evening. This is the AQI (Air Quality Index), a value that indicates the amount of PM 2.5 on a scale from 1 to 500. The latter are the so-called "fine particulate matter", produced by every type of combustion, able to penetrate the respiratory tract more deeply than PM 10 and therefore even more harmful to health, a potential cause of lung, hearth, and blood diseases.

To give an overview, an AQI value is classed as "acceptable" up to 100, to become "unhealthy", "very unhealthy" and, over 300, "alarming" – a level that forces the entire population to stay home and take precautions.

In those hours, the Twitter profile "Kvaliteta zraka - Sarajevo " ("Air Quality") – a bot that signals at any time the AQI of the Bosnian capital through a scale of emoticons, from the smiley faces to the most desperate – permanently featured the image corresponding to the most alarming value: a skull.

This is how, in the days between December 2nd and 4th, Sarajevo was the most polluted capital in the world, at least according to the data offered by US embassies, that constantly monitor the environmental situation of the cities in which they are based.

This is another unwanted record for Bosnia and Herzegovina, traditionally at the top of rankings for air pollution mortality according to reports from the World Health Organization - 5 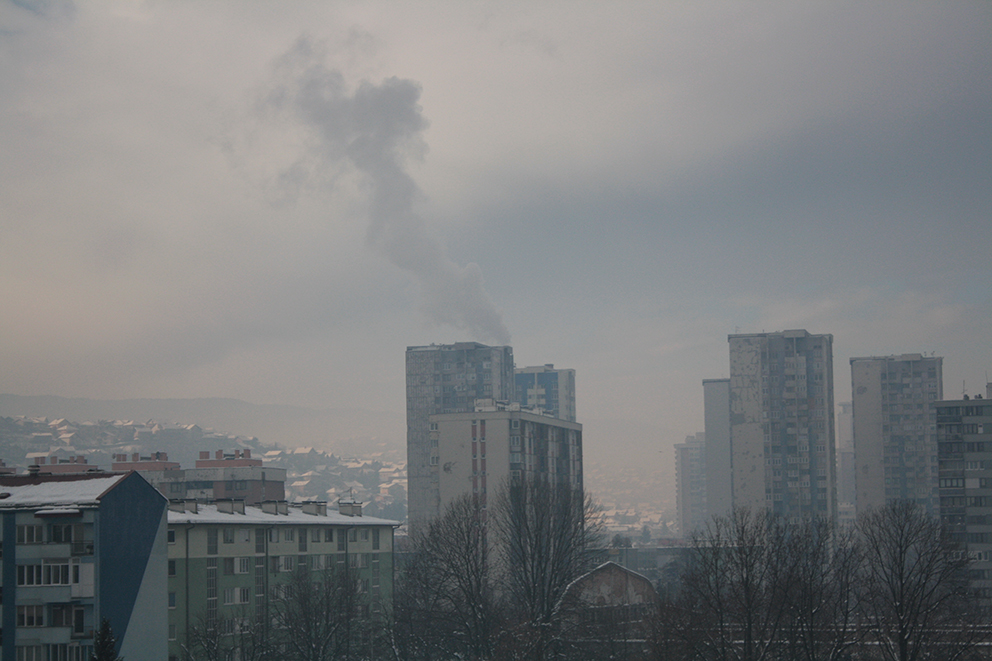 Within a few days, drugstores almost ran out of masks, while hospitals registered a strong increase in patients for respiratory infections. In the following days, wind and rain lowered the pollution levels, which nevertheless have risen again in the last days.

At the time of writing this article, on December 20th, AQI is back above 300, and the skull is back on Kvaliteta Zraka.

In recent years, peaks of winter pollution have become increasingly frequent. In a city like Sarajevo, closed in a valley between hills and mountains with little air circulation, the phenomenon of thermal inversion further aggravates the situation. However, the causes are obviously artificial and, if we look at the panorama of Bosnia and Herzegovina, very diverse. In some cities, industrial emissions are a substantial part of the problem, as in the case of the Tuzla coal-fired thermal power plant or the Arcelor-Mittal steel plant in Zenica, with totally out-of-scale emissions of nitrogen dioxide and sulphurous dioxide.

In Sarajevo, on the other hand, heating, energy inefficiency in homes, and car traffic are regarded as the main causes of pollution. Since the last post-war period, due to widespread economic difficulties and price distortions, there has been a rapid return to solid fuels – wood and coal. The latter is the cheapest, but also by far the most polluting material. For years environmental associations, following the requests of the WHO, have called for a ban. According to data from the 2013 census, in the canton of Sarajevo, homes are grouped by source of heating: 146,000 run on wood, 69,000 on gas, 21,000 on coal, 16,000 on electricity, and as many on fuel oil. Experts report that there are no energy certifications and emission controls, and that the sale of poor quality materials is permitted.

On this theme, the alibis of heavy industry and poor ecological culture inherited from Yugoslav communism are often invoked, but this is only partially valid. In the 1970s, after a period of alarming crises with serious repercussions on public health, the Sarajevo administration provided various incentives for the conversion of domestic heating to gas. A drastic reduction in emissions was thus obtained. Today's institutions fail to show the same attention, above all because of the fragmentation of levels of government, a notoriously omnipresent factor in Bosnia and Herzegovina. There is no State Ministry of the Environment, as the matter is entirely managed by the two entities (Federation of BiH and Republika Srpska) and, in the case of the Federation, it is mainly delegated to the level of cantons.

In truth, even at the local level, resources would not be lacking. The canton of Sarajevo is often referred to as "the richest in the country" due to the large tax revenue it raises. However, no political force has ever shown willingness to take structural measures, which could be unpopular and difficult to manage. One of the few proposals in this sense, presented last month by canton Minister of the environment Lukić, is a plan to extend the centralised gas systems. This would be the most effective solution to reduce air pollution. However, everything seems to be proceeding slowly, and without a parallel policy of price incentives it is hard to expect tangible results.

Sarajevo's other big problem is that of cars, normally old and polluting. The average age of cars in Bosnia and Herzegovina is 17 years and 69% run on diesel, therefore with higher emissions (official data from the 2016 Bosnian Statistics Agency). Only in the canton of Sarajevo, 21% of cars are Euro 0 , dating back to before 1991. Moreover, the increasing limitations to diesel cars in many European countries could give a further boost to the already thriving import of used cars in Bosnia and Herzegovina, increasing even more the impact of polluting vehicles if no restrictive measures are taken.

Also in this area, action is very slow. The exhaust emission test (eko-test) will become binding for revision only from 2020, but it will only be valid in the BiH Federation, not in Republika Srpska. Alternating license plates, despite being mentioned in Sarajevo for a long time, were applied for the first and last time on Christmas Day 2016, causing a lot of ​​controversy. On the other hand, the current condition of public transport in the capital would be inadequate and insufficient to absorb the reduction of private traffic.

According to the main subjects that monitor environmental problems, what is missing in Bosnia and Herzegovina is not only political will, but its previous assumption: resources for analysis, monitoring of data and health effects, more reliable figures that would stimulate real awareness in the population and a stronger pressure towards institutions. "We lack a precise diagnosis of the situation", says to OBCT Anes Podić, coordinator of "Eko Akcija", one of the most active environmental organisations and the first to create a web page and smartphone app that provides information on the quality of air in the main Bosnian cities. Activists and ordinary citizens have launched these instruments, faced with the institutions' inaction, and sometimes deliberate indifference. "But who was blamed by the cantonal government for the problems? The ones who created the app, allegedly spreading panic and false news", recalls Podić sarcastically.

Kvaliteta zraka ​​was created spontaneously by Imer Muhović, a Sarajevo engineering researcher working in Barcelona. Muhović is not new to such initiatives. He became known in the Bosnian media environment in the aftermath of the October elections, when he created projections and result maps on his own initiative, effectively replacing the State Electoral Commission. While the latter stood out for the impressive series of delays and the ineptitude in circulating information, Muhović embodied a spirit of civic redemption, the same shown by this new initiative.

Contacted by OBCT, Muhović explains: "People used very little the site of the American embassy. The emoticons and the Bosnian translation are more effective for communication, and the graph provides a complete view of the 24-hour cycle". But what was people's reaction, especially after December 3rd? "Initially there was a lot of concern, a petition was made online [on change.org, ndA] with great circulation to ask the government for measures, but in the following days, when the AQI fell, the reaction fell too. And the cantonal government has shown that it cannot deal with what happened".

The reaction of local power has been once again to minimise, to hope for good weather in the following days that would solve everything, to find explanations that are hardly plausible. In the aftermath of the world record, a scientific advisor to the cantonal parliament said that the air quality sensor was not reliable, because it was altered by the chimney of a nearby ćevabdžinica (a restaurant selling ćevapi, the typical minced meat sausages). The odd statement unleashed the irony of many Sarajevo people and the irritation of the US embassy, questioned because the sensor is on its building. Above all, it nourished yet another prejudice and ignited yet more indignation towards a class of politicians and technicians ready to blame anything, even the chimney of a ćevabdžinica, to avoid facing the real problems. One cannot but say: "all smoke".