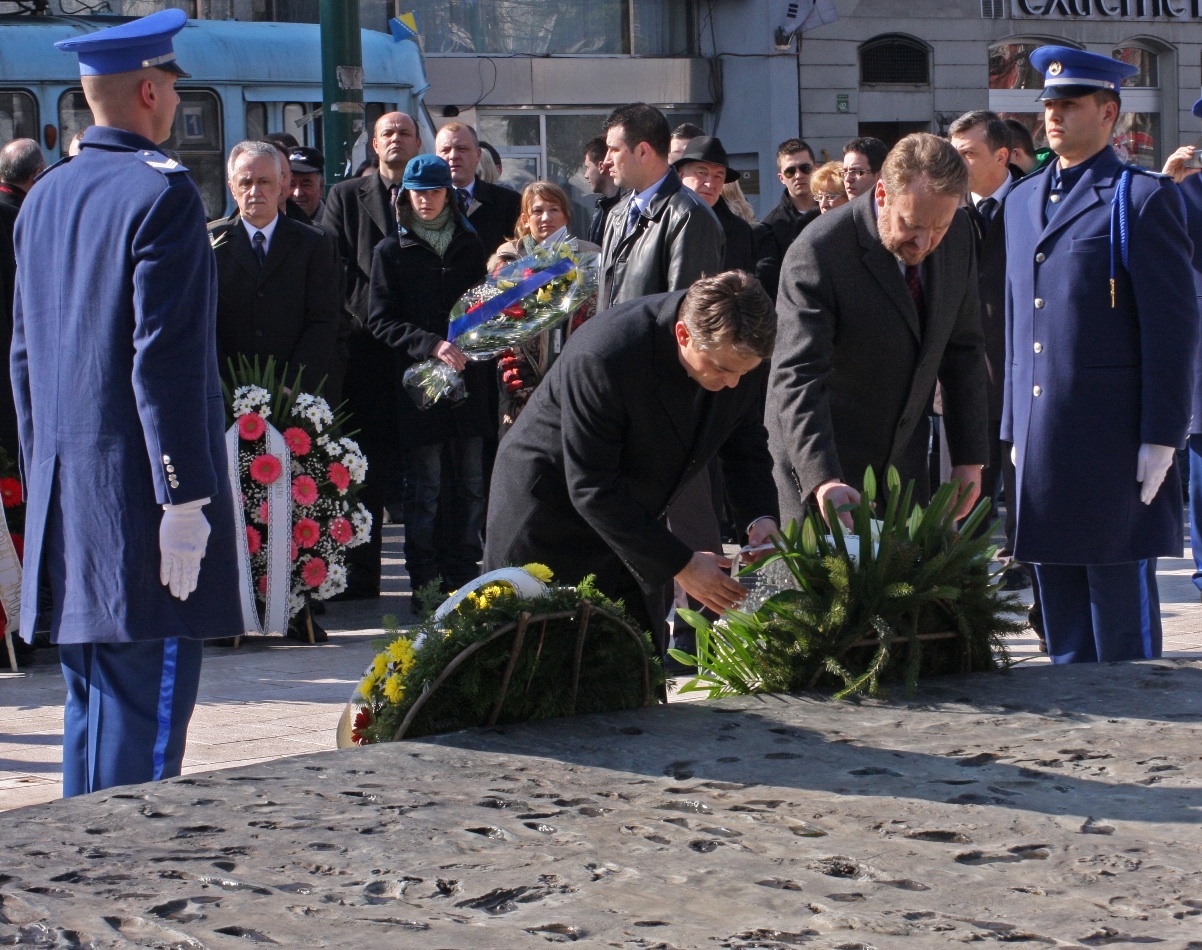 Sarajevo March 1st, 2012: Presidents Komsić and Izetbegović place a wreath of flowers on the monument dedicated to the children of Sarajevo who were killed during the siege (photo Michele Biava)

In March 20 years ago, after the victory for the affirmative vote in a referendum abandoned by the majority of the Bosnian Serbs, Bosnia Herzegovina declared its independence. A month later the war began. Here are some observations of Jovan Divjak on the twenty-year period

On February 29th and March 1st, 1992, the citizens of Bosnia Herzegovina were called to vote in the referendum on independence for the country. What do you remember of that time?

Today I look at what happened then very differently. Then I voted enthusiastically for the independence of Bosnia Herzegovina, because the policies put in place in ex-Yugoslavia were such as to oblige the republic of Bosnia Herzegovina to ask for its independence, as Slovenia and Croatia had. What then seemed to me completely acceptable was the fact that Europe had given us the task of using the tool of a referendum and of deciding.

The results are well known and naturally I have no wish to call them into question, but I do want to point out one detail: when the other side opposes and refuses to celebrate March 1st as the Independence Day of BiH, I would point out that between 10 and 15% of Bosnian Serbs in the larger cities like Sarajevo, Tuzla, Zenica and Bihac voted, so the Serbs voted too, not just Bosniaks and Croats. 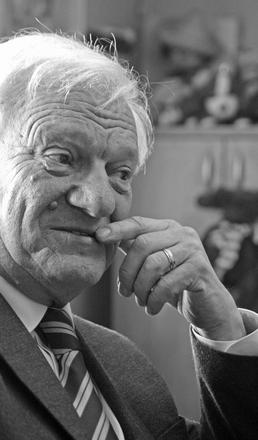 Another point is that the question was not looked at then in sufficient depth but, for example, the photographic exhibition of Milomir Kovačević Strašni (“Željeli smo samo mir”, We only wished for peace, on show at the Sarajevo Art Gallery until March 25th) shows splendidly the enthusiasm of the people who desired the existence of Bosnia Herzegovina, not just of one group of people but of all the Peoples it was made up of, because this would simply be a continuation from 1943.

What was the atmosphere like during the referendum? Apart from enthusiasm was there also fear? What influence did the war in Croatia have, the threats of the SDS and the skirmishes which had already taken place on BiH territory?

Answering for myself, not, I wish to specify, for what those days may have meant for others, I was not afraid, though maybe others were. I behaved as I did at elections, going to vote among the first, this being my right and duty as a citizen – some people don't go to vote either at elections or referendums. For me it was useful and I believe, with my vote to have given my small contribution towards the independence of Bosnia Herzegovina. So for me it was quite a solemn occasion – some people dressed up for it and put on a tie. I went to express my position according to which Bosnia Herzegovina has a right to its sovereignty. Even more so considering the winds meanwhile arriving from Belgrade and the areas with a Serb majority. One of the reasons for the fear was the threat of Karadzić in the autumn of '91, “if you get your State, there will be war and there will be one People less”. For me at that time it was one more reason to react. We should remember that already in '91 the Serbian nationalists had proclaimed their autonomy, the so-called “autonomous Serbian territories”. They had effectively brought about a secession. On January 9th this year the 20 years of the Republika Srpska were celebrated. This was a secession. The proclamation of the Republika Srpska went against the sense of Bosnia Herzegovina which was then a legal republic within the Yugoslav federation. This was one more reason for going to vote for independence.

At the time did you think there was any alternative to independence?

Then I didn't think about it enough. I was more taken up with my problems as member of the Civil Defence. I had been in the Civil Defence (DT) since 1984 and in September 1991 gave the order for a part of the equipment and arms of the DT in the territory of Kiseljak to be handed over to the local police. For this I ended up in court and was found guilty. I was very occupied with this business so didn't have chance to look into what was happening in any depth. But I do know of some things that took place. Later I often heard speak of how Filipović and Zulfirkarpašić, in agreement with Alija Izetbegović, went to Belgrade to talk to Milosević about a possible alternative solution. I followed the meetings of the six representatives of the republics and their debates on how Yugoslavia could be divided; naturally I knew about the idea that the late presidents of Macedonia and BiH had for a sort of confederation of independent states and I know about a rumour which I heard afterwards that there was a first agreement with Slobodan Milosević to this end, and that President Izetbegović initially accepted but then changed his mind. Historians however will have to establish the truth of this. As regards this waiver, it has been said that if we had accepted we would have been Milosevic's slaves. In my opinion it could perhaps have been like Czechoslovakia and we would have separated peacefully. Moreover I don't think the analysis was correct of those who, together with Izetbegović, considered there was a possibility they would have had great support from Arab and Muslim countries. Unfortunately this did not happen and we have nothing remotely near what we had hoped for on February 29th and March 1st.

As a citizen of Sarajevo, an intellectual, but also a member of the Civil Defence, what did you expect after the referendum, what possible scenario?

I didn't for a moment imagine it would come to war. Now the experts and intellectuals say it was known. I didn't know – maybe I was naive at the time but I hadn't the slightest idea it would come to a war. What happened in Slovenia and Croatia, for instance, for us was far away. Dubrovnik, Vukovar and even what happened in Bijeljina, were all somehow far away. Even if I had said to some journalists that a war could break out, I was convinced it could never hit Sarajevo. In those days in no way did I think that, until the special forces of the SDS opened fire from the roof of the Holiday Inn on the peace demonstrations of April 5th, until Olga and Suada were killed, until the first bombardments began.

Through the referendum the majority voted in favour of “a Bosnia Herzegovina sovreign and independent, a state of citizens entitled to equal rights, of the peoples of Bosnia Hezegovina, muslims, serbs, croats and those belonging to other peoples living there”. Which aims have been achieved?

Unfortunately not even one, because one of the groups, one people of Bosnia Herzegovina has not accepted it. The expression “State of Bosnia Herzegovina” is used, but in fact it doesn't exist, it exists as a geographical concept, but in politics, in culture, in education and in reality it is not to be found. Do you know that the train from Sarajevo to Belgrade has three carriages? One for the Federation, one for the Republika Srpska and one for the Serbian Republic, and passengers buy tickets for their “own”respective carriage and en route the engine is changed. This is mad, a clear image of what this country is.

Is the Bosnia Herzegovina of today a State of citizens or of people belonging to national groups?

Unfortunately the second is true, only the second. The rights are only for who in a precise area belongs to its national majority group. Bosniaks and Croats in the Republika Srpska do not enjoy the same rights as the majority of the population; Croats and Serbs in Sarajevo do not have the same opportunities as Bosniaks, and likewise in the areas with a Croat majority discrimination takes place towards others. I would call this assimilation, segregation in the schools as in all aspects of life. We talk a lot about cases of “two schools under the same roof” (when in the same building two different scholastic institutions coexist, following two different syllabuses, according to the nationality of the student, e.n.), always forgetting that in most places where a national group is decidedly in the majority, those belonging to other groups are often obliged to follow the main syllabus, except for during the lesson on religion. So all over there are processes of assimilation and segregation. Over and above the syllabuses, shall we take a look at the choice of text books? Let's pretend you are a Croat and have written a mathematics text book. Your book will not be used in “Bosniak” schools. And if I as a Bosniak write an English text book? It certainly will not be chosen in a school in the RS. Even if recent history is not present in school texts, other ways have been found to differentiate education on a national basis. What about Śantić? I don't think that in a school in the RS, teaching Śantić, Emina is mentioned. Another subject will certainly be chosen. If Tadić, President of Serbia, comes to Pale in the Republika Srpska and inaugurates a school called Serbia, what can it mean? Today the new generations are being brought up in hatred. Much more than in 1995.