Bosnia and Herzegovina: The Debts of War 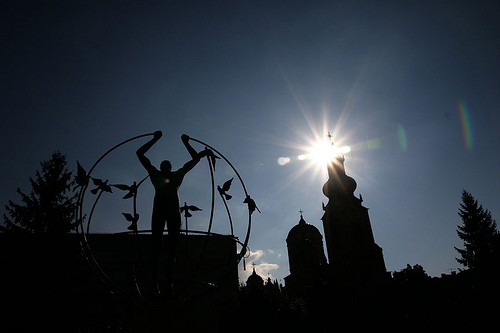 An attack by war veterans on a federal government office reflects the serious problems in the economy of Bosnia and Herzegovina (BiH). The unsustainable cost of public administration; the war-related welfare expenses; the consequences of the global crisis. An analysis by economist Drazen Simic

“Sooner or later accounts need to be settled, otherwise poorly governed countries fail. It has always been like this, ever since ancient Greece.” Drazen Simic, an economist from Sarajevo, analyses for Osservatorio Balcani e Caucaso the current situation in the federation of Bosnia and Herzegovina, one of the two entities comprising BiH.

On 21 April, 6,000 war veterans protested in front of the federal government building. Their action escalated into violence, arson, and clashes, which injured 60 people.

At the protest, chaos erupted almost instantly. After throwing stones at the windows – workers had been ordered earlier to leave the premises – protesters set on fire the police posts in front of the building and attempted to also ignite the building’s first floor. Damages have been estimated to be 200,000 KM (100,000 Euro). The police have arrested around ten persons.

Protesters wanted the resignation of the federation’s prime minister, Mustafa Mujezinovic, who did not want to receive them that day. However, the disorder resulted from developments during the last four years. According to Simic, the problems go back to 2006 when the government passed a series of laws on veterans’ rights, which required an annual allocation of 700 million KM (approximately 350 million Euro). The federation’s budget, however, lacked the money.

Simic says, “It was only a political manoeuvre in order to win votes in the 2006 election.” According to the economist, the government at the time knew there was no money for the veterans. The continuous postponing of implementing the law inspired the protests in subsequent years.

The law, according to Simic, was only a wish-list which guaranteed ex-soldiers and their families some rights, such as unemployment allowance, free health care, the right to start-up funding for opening a business, the right to re-enter into categories of persons who have advantage for employment with government bodies, right to early retirement, and other privileges. All of this would have cost 700 million KM per year, which as mentioned, did not exist in the budget.

According to the records of the federation government, the Sarajevo canton has 1,106 veterans with major war decorations such as “Zlatni liljan” (golden lily) and “Zlatna policijska znacka” (golden police badge).

In the Sarajevo municipality of Centar, 1,500 veterans receive disability allowance. In the same municipality, 1,300 persons receive assistance as relatives of war victims.

The law on veterans was supposed to enter into effect at the beginning of 2008. However, by the end of that year, BiH was already bankrupt because of factors, such as the elimination of custom duties, as foreseen with the Stabilization and Association Agreement with the European Union, the continuous growth of the federation’s administrative expenses and the decline of foreign investment following the international economic crisis

In 2009, the federation government could not pay salaries and pensions and decided to borrow up to 160 million KM (80 million euros) from domestic commercial banks. This appeared to be the only solution because the previous year’s budget deficit stood at over 250 million KM (128 million euros). In 2008, the federation had a budget of 1.75 billion KM with 400 million, or 23 percent designated for veterans and disabled from the war.

Because of the deficit and the economic crisis, the rise of unemployment, the decline of investment, and the constant pressure exerted by the veterans, the government had to ask the International Monetary Fund (IMF) for help to pay salaries and pensions.

As a result, the government had to introduce reforms and a rigid financial discipline, as well as closely follow the budget regulations for public spending.

In the letter of intentions, the federal government agreed to cancel the provisions of the law that provided unemployment assistance and compensation for the demobilized soldiers, and to reduce by 10 percent the salaries of all public servants paid by the federal budget.

The cost cuts and the administration reduction, according to Simic, would, however, not produce benefits for the economy: “If the number of public officials and their salaries are drastically reduced, the pension funds, which are already at the edge, would ‘explode’, and we would find ourselves before 350,000 starving retired persons in the streets, even more unemployed; a reduction of the purchasing power, a decline of consumption and of production, and a decline of the budget revenue because of reduced tax collection.”

Simic, as an economist, believes the solution is to create an improved work environment in the country, which would attract foreign investment and promote the development of national entrepreneurship.

In the World Bank’s ranking of environments for promoting entrepreneurship, BiH lies at 116 out of 183 countries. In BiH, approximately two months are needed to start a business. The average in Eastern Europe and Central Asia is 17 days. In addition, a medium-size company in BiH spends 400 hours annually on preparing and paying different taxes. In Western European countries, in the US and Japan, all of this is done in 195 hours.

According to the same report, in order to register property in BiH, one needs to pass through seven different procedures, which take 2.5 months. In Western Europe, the procedures only take 25 days.

The Transparency International ranking of corruption puts BiH at 99 out of 180 countries, at the same level as Zambia, the Dominican Republic, and Senegal.

The RS’s exports are also small, around 60% of the imports. The government has a budget deficit and GDP has declined. The RS administrative salaries have fallen by between 10 and 15 percent.

In 2009, BiH’s external debt totalled over 5 billion KM (2.5 billion euros), an increase by 22 percent compared to 2008. The continuous borrowing and the economic difficulties confront the new generations with dark prospects for repaying debt.

“We are reliving the last 70 years [of Yugoslav history]”, says Simic. “The same history, the same end. The loans with low interest rate are spent for basic necessities. Then, day after day, the interest rates on the global markets will rise drastically, and there will be no way out for the country. You go on paying more and more, but the debt does not decrease; you only pay the interest. Ex-Yugoslavia took USD 20 billion in loans between 1970 and 1980. At the end of the 80s, it had already repaid 20 billion, but it had another 20 billion left for repayment. At the end it imploded.”