Dealing with the past through feminism 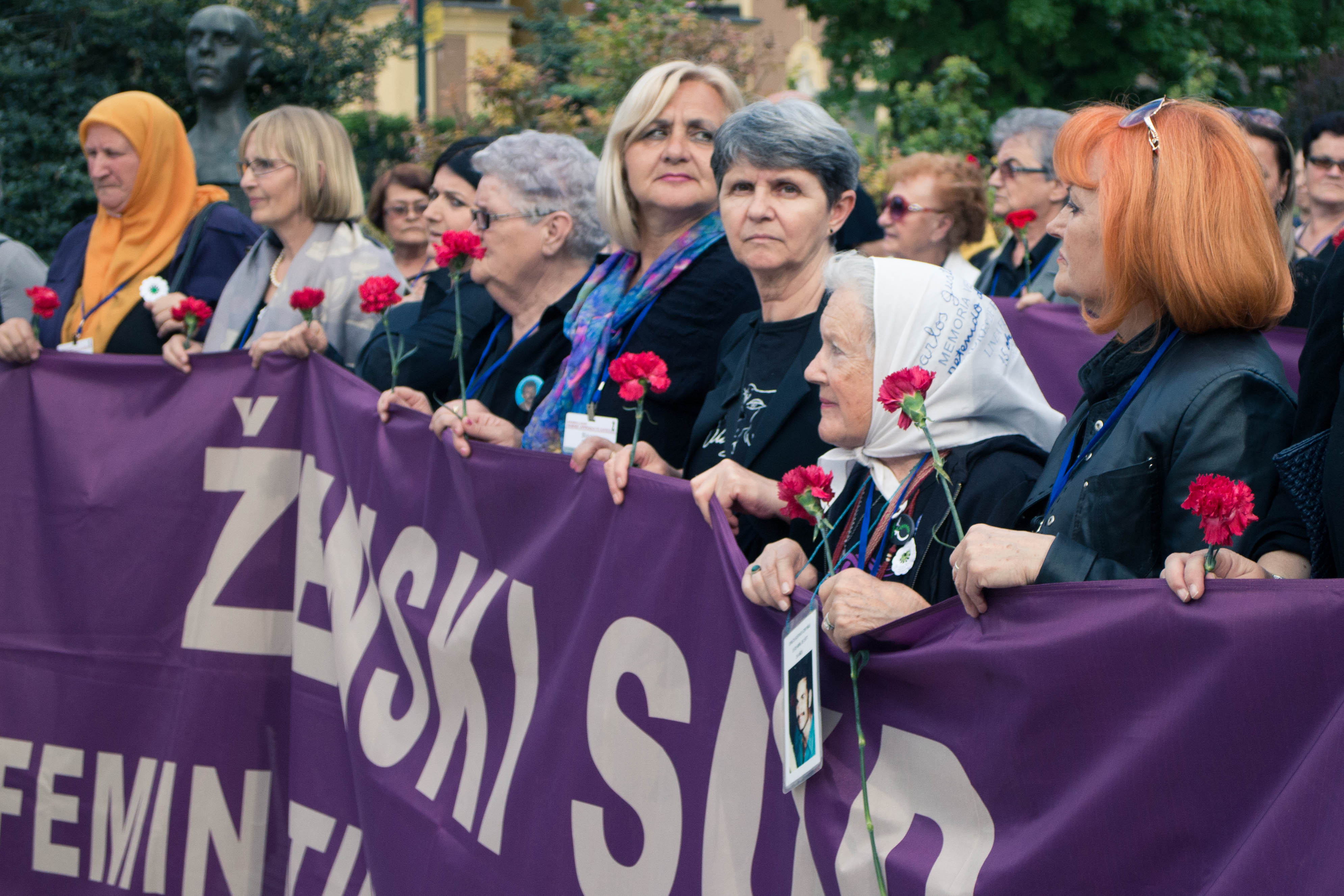 The Sarajevo Women's Court and transitional justice in the former Yugoslavia: preliminary reflections

Since the end of the wars of the 1990s, the post-Yugoslav countries have become, as famously stated by Eric Gordy and Jasna Dragović-Soso, a laboratory of transitional justice. The region featured the first International Criminal Tribunal (ICTY) to be ever established, one of the first mixed courts (the Court of BiH) created by international and domestic institutions together, several attempted truth and enquiry commissions, among which the first bottom-up initiative worldwide to form a regional truth commission (REKOM).

The Women’s Court that took place in Sarajevo also fits within this experimental trend. It adds a feministic approach to the variegated array of measures that try to bring some justice for the crimes committed during the war-ridden decade of the 1990s. From May 7 to 10, the Court allowed more than 30 women from all over the former Yugoslavia to tell their stories of violence and resistance to a supportive public of about 500 participants.

The first took place in Belgium in 1976 and tackled a broad range of crimes against women, from politically motivated ones to rape and domestic violence. But it wasn’t until the 1990s that a less formal model of women’s “courts” (as opposed to the more formal “tribunal”) gained popularity, especially in Africa, Asia and South America.

Since 1992, about 40 such experiments of symbolic justice were carried out in several countries, from Pakistan to Egypt, from Japan to South Africa. The Women’s Court for the Balkans is the first example of this second generation to be carried out in the European continent.

Women’s Courts are all structured in a similar way: women survivors give their testimonies, local experts of academic or activist background situate them in the wider historical context, and finally a mixed jury of international and local activists with a high moral standing issues conclusions and recommendations that have no legal, but symbolic value.

A space for survivors

The need for a feministic approach originates from some oft-mentioned shortcomings of ordinary justice, among which the limited role that witnesses are allowed to have in criminal trials. Here, rules of procedure strictly dictate how much the witness is allowed to say, always frustrating the survivor’s need to share her story and contribute to justice. Victims can also go through re-traumatization, most notably through cross-examination, which in the partly adversarial system of the ICTY can be carried out by the indicted him/herself: everybody in the region remembers Slobodan Milošević posing intimidating questions to his victims at The Hague.

By contrast, the Women’s Court’s aim is to make survivors subjects of justice. To this end, the witnesses/survivors were involved in the preparation process, which in the case of this Women’s Court for the Balkans included consultations, seminars and public presentations realized throughout the region. Psychotherapists were there to support witnesses before, during and after their testimony, and witnesses sat together on the stage, providing support to each other in the emotional peaks of the testimonies.

Connecting the dots of a fragmented past

But a feministic approach is more than just restorative justice. As pointed out by one of the organizers, Ljupka Kovačević from NGO Anima in Kotor, the Women’s Court is “not a psycho-therapeutic court, but a political court.” This refers to the other shortcoming of ordinary justice that the Women’s Courts wish to make up for, i.e. the capacity to highlight the responsibility of political institutions, political elites, and more in general to reveal systemic patterns of violence.

These issues cannot be tackled through criminal trials, which can only establish whether a specific individual can be held responsible for a specific crime in a specific moment.

Moreover – and even more problematically - the attention given to criminal trials in the past couple of decades has taught us to think of justice just in terms of criminal justice. We have come to identify crimes with those acts that are judged in criminal courts, such as mass killings and rapes perpetrated during the war. We are much less aware of all the people killed by the health issues developed as consequences of the war, or by the poverty generated by the economic transition. We are less aware of all the women raped by their own partners as a consequence of war traumas or re-traditionalization of gender roles through the dominant ethno-national narratives.

The Women’s Court aims to make up for this justice (or rather injustice) gap, by giving voice to stories that, despite being very recurrent in the region, would otherwise remain unheeded.

Hence, a woman from Bosnia Herzegovina did not just tell the audience about how she was systematically raped as a teenager during the war, but went on remembering how she sought a safe haven in marriage (with a man of her same ethnicity, she underlined), which turned out to be abusive; how she had had the strength to end it and find a job to maintain herself and her two children, as well as sending them to school; but how her grown children were now unable to find a job due to the current economic situation.

We heard the stories of those Serbian women, representing the mothers and relatives of thousands of men forcibly mobilized during the wars of the 1990s, who saw their male relatives physically or mentally destroyed by their experiences at the front. Or of Roma women, who were the first to lose their apartments and jobs in the transition as a consequence of discrimination, exacerbated by the nationalist rhetoric dominating from the 1990s onwards.

This broader conception of justice reveals how the war, as well as the nationalist narrative and the economic transition it imposed, made women particularly vulnerable. The resistance of women that emerges from initiatives such as the Women’s Court is just a revolt against this imposed, not intrinsic, vulnerability.

Lastly, as explained by one of the members of the Women’s Court’s jury, Vesna Teršelič of NGO Documenta in Zagreb, a feministic approach is key to understanding the interconnectedness of these different forms of violence: “By understanding the gendered dimension of violence we acquire a very important mechanism for interpreting all forms of brutality. When we speak about violence, we generally think about domestic violence, or violence between strangers, perpetrated with some criminal motive, or even about the collective forms of violence that we witness in a conflict. But we must not forget structural violence, because this growing polarization between the poor and the rich is simply unacceptable.”

With this ambitious agenda, the Women’s Court definitely managed to fill in some of the gaps of the ordinary justice system, which it criticizes but still considers indispensable. It is, however, a fairly small initiative tackling a huge amount of injustices. For every woman testifying, there are thousands that remain silent, especially those that are out of the reach of nongovernmental organizations and victims’ associations. In this respect the organizers strove to de-centralize their efforts. However, many of the witnesses were already members of the NGOs involved.

One other important element that may constrain the impact of the Women’s Court is the gap between the women’s groups’ stance and the international approach to justice in the former Yugoslavia.

First, the international community and Women’s Court differ in the diagnosis of the problem. The Women’s Court’s jury understood all the forms of violence experienced by the witnesses as occurring within broader systems of criminality. The systemic definition of injustice embraced by the Women’s Court, which also emphasizes the adverse consequences of the economic transition process on society, contrasts starkly with the narrow and legalistic approach of the international community.

Second, they differ in the solutions proposed. The call for justice made by the Women’s Court’s jury is, at least partly, based on the rejection of the economic transformation undergone during the transition process. From the women’s point of view, understanding the post-conflict and post-socialist condition of the region is crucial in order to understand and address justice demands. On the contrary, international efforts are mostly directed towards transforming the dysfunctional Balkan systems into fully efficient market economies, with not much regard for these justice demands.

This gap between the international and the women’s approach signals a strong need and will, on the part of women’s groups, to stop looking at the international community as the most important transitional justice actor in the region, and to develop alternative efforts that can be more legitimate and locally owned. On the other hand, since socioeconomic reforms in the region depend on international (and especially EU) guidelines, this gap poses a significant obstacle to the Women’s Court call for justice.

It will therefore take much stubbornness and a long-term commitment on the part of the women’s organizations in order to have a broader political impact and prevent this call for justice from remaining unheeded.