Bosnia and Herzegovina, the right to the rule of law 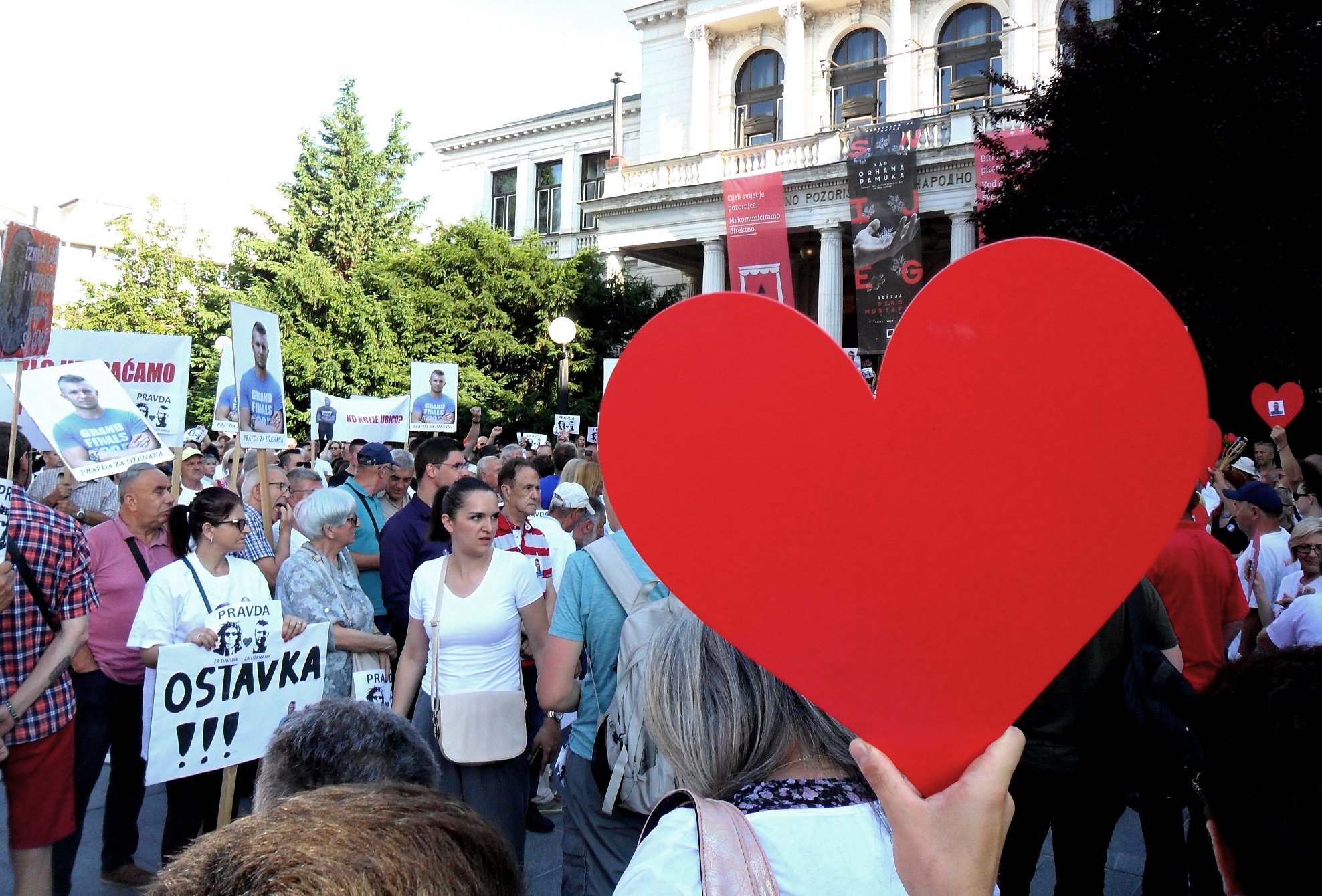 The deaths of Dženan and David are just some of the "silenced cases", the many episodes of bad justice that have shaken Bosnia and Herzegovina in recent years. Hence arose one of the few mobilisations capable of crossing the administrative and so-called "ethnic" borders of the country after the war

"My brother is a symbol of struggle and resistance, and you are the demonstration that not everyone in this country has a stone in place of the heart". Even when it is broken by emotion, Arijana Memić's voice resounds loudly in the square of the National Theatre of Sarajevo, in front of about a thousand protesters, in the scorching sun of this Saturday in late June. Arijana is the sister of Dženan Memić, a 22-year-old boy who died in Sarajevo in February 2016 in circumstances that have not yet been clarified by justice. Yet another phase of this controversial trial is starting.

Dženan's death is one of the "silenced cases", the many episodes of bad justice that have shaken Bosnia and Herzegovina in recent years: unsolved murders, suspicious incidents, abuses and omissions of the judicial and security organs. Hence arose one of the few mobilisations capable of crossing the administrative and the so-called "ethnic" borders of the country after the war. In the square, together with the collective Pravda za Dženana ("Justice for Dženan"), many causes are represented: Edita Malkoć and Selma Agić, two Sarajevo university students killed by a street pirate in 2016; Jovan Arbutina, a young man from Banja Luka run over by a car in 2015; Harun Mujkić, eleven-year-old from Zenica who died in school in 2014, with a suspected head fracture; and then Ivona Bajo from Bijeljina, Nikola Djurović from Banja Luka and many others, all very young.

Arrived en masse with several buses from Banja Luka, in this square there is also the brother movement of Pravda za Dženana: Pravda za Davida ("Justice for David"), which calls for justice for the case of David Dragičević, 21, killed in Banja Luka in March 2018. Motive and culprits remain unknown after a sophisticated series of omissions and cover-ups by the authorities. After a nine-month non-stop garrison that turned it into a central player in Bosnian public life, since last December Pravda za Davida has been subjected to harsh repression by the authorities of Republika Srpska (one of the two entities of Bosnia and Herzegovina, of which Banja Luka is the capital). 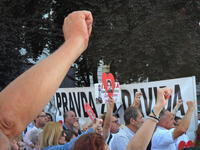 On Saturday, June 29th, hundreds of protesters gathered in the Bosnian capital to express support for the parents of David Dragičević and Dzenan Memić, killed in unclear circumstances, and to demand that the rule of law be respected. Photo by Alfredo Sasso

David's father, Davor Dragičević, sent a live video greeting from Austria, where he resides temporarily to escape arrest (precisely following protests in which he asked for truth for his son). Thus Dženan's father Muriz Memić replied from the square: "My brother Davor seeks truth for his son. Both Davor and I deserve it. I invite current president Milorad Dodik to come here today to see how much humanity is here". As soon as the square hears the name of Dodik (former leader of Republika Srpska and regarded as the instigator of the repression against the movement), whistling starts. The same happens at the mention of Bakir Izetbegović, ex-state president and leader of the Bosniak nationalists, seen – together with Dodik – as the face of Bosnian politics of the last decade, and therefore of the malfunctioning of the state and of justice.

All these causes are apparently distant due to location, motives, and development of cases, but they have found a common ground fighting against impunity and demanding a normal country. None of these causes was born as "politics", a label constantly rejected with disdain. Yet, all call into question the crucial problems of the Bosnian ethnopolis (and not only, to look at today's European scenario): the rule of law, the little credibility of the organs of justice and security, the right to individual safety, even freedom of expression.

In the square there is Suzana Radanović, mother of David Dragičević, who has become an icon of civil courage in Bosnia and Herzegovina for challenging the bans to demonstrate and the cover-ups surrounding the murder of her son. Dozens of people, mostly women and elders, are literally queuing up to greet and embrace her. "Today was a beautiful event – she explains to OBC Transeuropa – for me it is important that here we can sing David's song, or rather, that people can sing it: I still can't do it, it's too painful. But at least we were able to shout Pravda za Davida, raise our fists (the movement's symbol-gesture, ed.) – all things that can no longer be done in Banja Luka. We also fight for freedom of speech and, literally, freedom to live".

The Memić family's struggle for truth has lasted for almost three and a half years. On the night of February 8th, 2016, an ambulance rescued Dženan and his girlfriend Alisa Mutap at Velika Aleja, the long pedestrian avenue in Ilidža, a suburb of Sarajevo. Dženan was lying on the ground unconscious, in serious conditions, with severe bruising on his head. Alisa, on the other hand, was in a state of confusion, but with lesser injuries. Admitted to the Sarajevo University Hospital, Dženan died on February 15th, after seven days in a coma. There began a whirlwind of hypotheses and judicial errors.

According to the report of the doctor who operated on Dženan during the coma, the boy was undoubtedly subjected to a violent attack. No injury would be compatible with being run over by a car, which is however the hypothesis on which the investigation of the prosecutor's office in the canton of Sarajevo would concentrate. Three months later, in May 2016, Ljubo Seferović was arrested, accused of running over the two kids with his van while driving while intoxicated, only to flee and try to tamper with the evidence aided by his father and wife, also arrested. Initially Seferović admitted the culpable accident, but later he denied and declared himself innocent. In the first trial before the Sarajevo Cantonal Court, some decisive traces and finds disappeared, others became useless. The video footage was missing of the road cameras in the decisive minutes, the evidence of Seferović's inebriated state, the tracks that confirm that the van involved was actually his. Heavy inconsistencies emerged between the various expert reports. Alisa, the only direct witness to the facts, declared she suffered from amnesia on the facts of the night.

Thus the collective Pravda za Dženana was formed, led by the boy's father Muriz and his sister Arijana. The first protests began in the city. Last Saturday's was the 18th, they said several times from the microphone with a mixture of pride and tiredness. The Memić family strongly supports the thesis of murder. The van, according to them, is a screen created by Dženan's attackers, who would have taken advantage of the vulnerability of the Seferovićs, a poor family of Roma origin, to trap them. The movement accuses the judicial organs, first of all the power of attorney of the canton of Sarajevo, of not doing their job, because of incompetence or because they are intentionally removing the truth.

Local media and institutions constantly followed the case, and suspicions of all kinds circulated, many without foundation: rumours that family members of politicians, entrepreneurs, or criminals were involved in the murder; rumours about Alisa and her silence that would protect the perpetrators; rumours about the Memić family's political ambitions (Arijana, in the wave of the case, was elected in the cantonal parliament in 2018). People believed in everything and nothing, with a highly fragmented and ineffective judicial system, which follows the country's administrative division (municipalities, canton, entity, state) and is permanently subjected to pressure from politicians and power groups to co-opt and exchange favours. Even the Parliament of the Sarajevo canton took a stance on the gaps in the work of justice and security bodies, recommending internal investigations which, however, would never start.

In July 2018, a new twist took place. The sentence of the cantonal court absolved the Seferović family for lack of evidence and rejected the accident thesis. The Memic family then wanted the acquisition of new evidence and above all asked for the case to be taken on by the State Court, and not the cantonal one. Muriz Memić denounced more than 40 people including prosecutors, judges, and members of the police who would have committed serious irregularities in the case. Instead, in June 2019 the Supreme Court of the Federation of BiH (the intermediate level between state and canton) overturned the picture again, ordering the repetition of the first instance process. The procedural thesis returned to the accident rather than murder. All over again. The movement's reaction was very hard: Muriz Memić and his lawyer Ifet Feraget talked about "organised crime in the justice system".

Right at the beginning of June 2019, a corruption scandal broke out in the Council of the State Judiciary. The president of the largest judicial body in the country was filmed as he committed to closing a criminal case against payment of money. It was the confirmation of what the movements for justice had been saying for years. But political parties responded with indifference, absorbed in the negotiations to form the state government that have lasted for nine months now. Most public opinion appears inert and resigned.

It is no coincidence that the traditionally soft positions of the international community are now more incisive, as if to shake things up. "Three months ago I met the parents of David and Dženan. Yesterday they and many other parents and frustrated citizens demonstrated peacefully in Sarajevo against the absence of justice in Bosnia and Herzegovina. The long delays in the legal management of these and other cases are unacceptable for a country that seeks access to the EU", was the harsh comment to the demonstration by EU Commissioner for Enlargement Johannes Hahn in a tweet.

When cornered in their own country, the movements seek international viability. Suzana Radanović explains to OBC Transeuropa: "In Banja Luka our movement cannot exist now, but we have re-established the association in Vienna, and on September 12th we will organise a conference to which we will invite international politicians, journalists, and diplomats. We want to inform Europe of what is happening". Meanwhile, the many battles for truth and the rule of law continue, so that very young kids who have found themselves in the wrong time and place do not lose their lives, as has happened too many times in these years. Or so they do not decide to leave the country, as happens in dozens of cases every day.