The village submerged by the Neretva 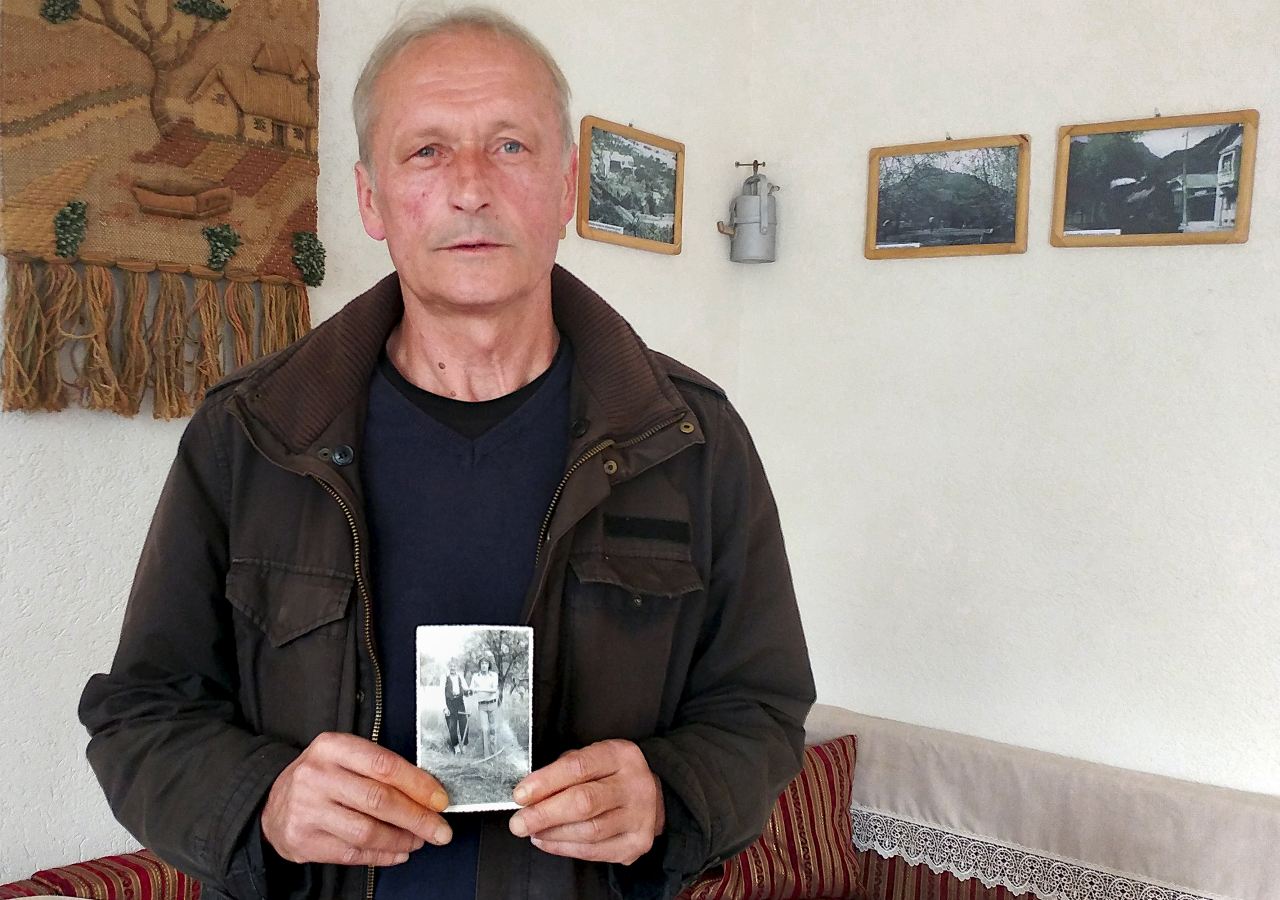 Lisičići, halfway between Mostar and Sarajevo, was submerged by an artificial lake in the 1950s. After nearly 70 years, the inhabitants still await justice. Meanwhile, the village has been reborn, and the lake has become its best ally

"There was the station, there the fields. The river flowed on the other side of the valley. And there – Professor Zahid Borić points to the surface of the lake – there was the cemetery. In fact there still is, submerged". Leaning under the umbrellas we try to imagine, but the only things we distinguish are the circles of the rain on the metal gray surface. On the other bank, large dark clouds puff, hiding the green mountains of late May.

For many, a lake is an immutable component of the landscape, such as rivers and mountains. Not for those who grew up in Lisičići, Bosnia and Herzegovina, the submerged village of Lake Jablanica.

In the memorial hut, a constant downpour accompanies the professor's slow words. Sitting next to him, his son Asmir and Mensur Duraković, like Zahid a piece of the historical memory of the village, silent and smiling. They chime in from time to time to expand the story. Photographs of ancestors faded by time, old cadastral maps, a vintage telephone speak of a daily life that was suddenly interrupted. The professor points to angular trophies that recall, in a small way, the brutalist architecture of Yugoslav socialism. Life always goes on, and so it did even after 1953, the year of the flood. A print on an aluminum cup reads "najboljoj ekipi u Ferpleju – Mostar, 1978". A prize for fairplay. But not everyone has played fair in this story. 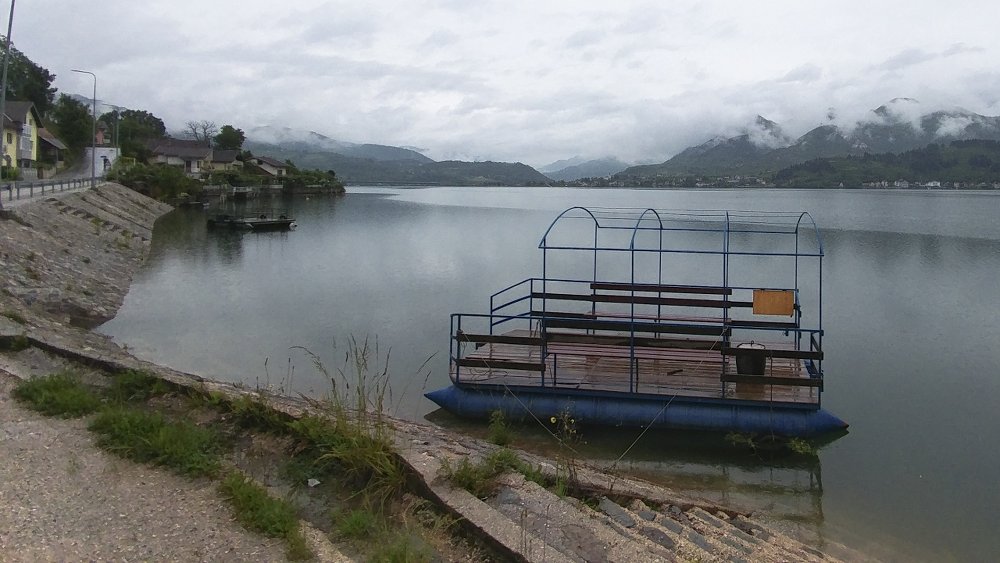 Lisičići is halfway between Mostar and Sarajevo, in the Neretva Valley. The water-green and turquoise river makes its way between wild and spectacular cliffs, but in this stretch it slows down in a fertile plain, a point of passage since the Neolithic between the Adriatic and the inland. The Austro-Hungarians built the railway and a station, and since then the plums, apples, and apricots produced here have travelled to the coast, even to the other side of the sea. The idea of ​​a dam on the Neretva dates back to those times. But the Austrians meant for the lake to lap the village, not to destroy it. "Lisičići on the sea", joked travellers at that time, hearing the plans of the distant capitals of the empire.

In 1943, the legendary battle of the Neretva was fought a few kilometres from here. The partisans managed to save thousands of wounded from the fury of the Nazis by blowing up a bridge. The ruins of that bridge – or rather the one rebuilt and blown up again to make the most famous Yugoslav film – are still there to remember the heroism of the partisans.

But a few years later, on the banks of the Neretva, the republic founded by the partisans was not as heroic. Young Yugoslavia needed energy, and this was the chosen place. It was not up for debate. The professor shows us a document of the time. The details of the evacuation order can still be read on the yellowed paper: the date by which to leave the house, where to go with few things, the threat of severe penalties in case of disobedience. Next to the official's signature, the partisans' motto sounds cruel: Smrt fašizmu! Sloboda narodu – death to fascism, freedom to the people.

In a black and white photograph, taken from an old documentary, the roof of a minaret emerges from the water while a man seen from behind, in a canoe, paddles slowly at the height of the roof. The professor shows us another photograph: it is Avdo Sarajlić, his maternal grandfather, the old muezzin. While the village was being knocked down with a pickaxe, he had perched on the tower where he used to call the faithful to pray. Words and stones were not enough to bring him down, and so the minaret was saved.

There is a small constellation of sacred ruins – from the bell tower of Curon in the Alps to the minarets of Sivas and Agri in the steppes of Anatolia, passing through South America, Russia, the Iberian Peninsula – which rise all over the world from the waters of the artificial lakes, the only witnesses of the villages sacrificed to modernity. 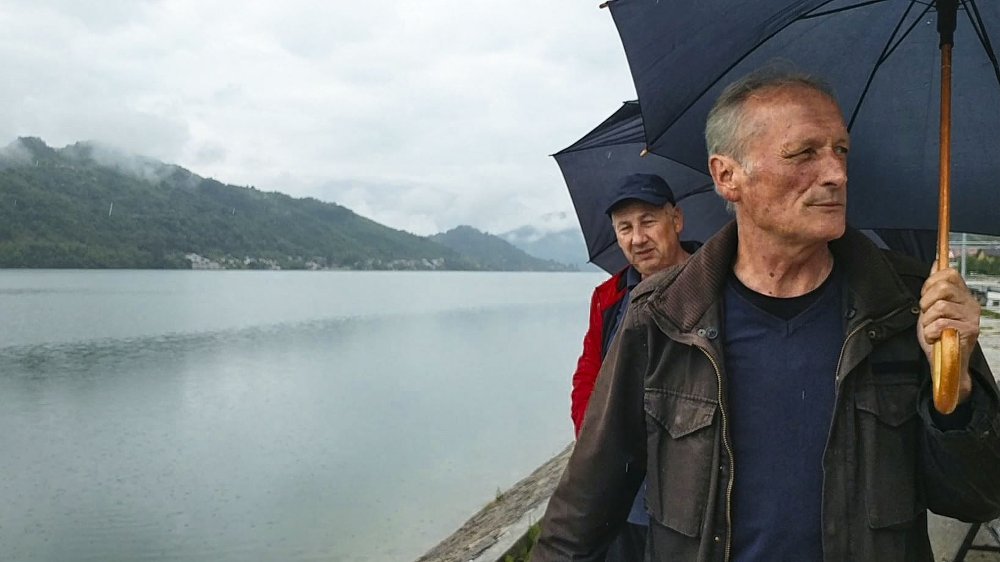 The Lisičići minaret was not part of it for long, it was crushed by the water in a few years. But the memory has remained, and today its shape is the symbol of the Association of citizens of the flooded area of ​​Lisičići, which after almost 70 years is asking for justice for the displaced persons and their descendants. There is even a fountain in the shape of a minaret. It was designed by Muamer Sarajlić, another nephew of the muezzin's. "Building drinking water fountains is considered a good deed in the Islamic tradition, and that's how my family wanted to honour it", writes the daughter of Professor Borić, a human rights lawyer who follows step by step our visit from afar. The muezzin's tomb, right next to it, is shiny in the rain.

Fascinated and soaked, we continue, while the professor tells the story. "The compensation was paltry. One hectare of land was paid the equivalent of a hundred eggs". Suddenly poor, displaced in the middle of eastern Bosnia where they had no connection, the inhabitants were desperate. Until someone decided to return. On the steep and stony shore, once an uncultivated land upstream of the village, the first houses sprang up. For Lisičići, a chapter began that no one had foreseen.

An illegal settlement had no right to be connected to the electricity grid or to the aqueduct, nor even to a road – let alone to a bridge, even if everything was on the other side.

"To go to school we crossed the lake with rafts and battered boats, every day, in the rain or snow", recalls the professor. It took great motivation, and it is no coincidence that many of those kids have made brilliant careers in Yugoslavia and around the world. Zahid stayed to teach philosophy and sociology in nearby Konjic, helping to keep the memory of the submerged lands alive.

In the 1970s, using a dredger, the inhabitants built a road by themselves that followed the shore up to Konjic. Over the years the abusive outpost became a respectable village, with an outpatient clinic and even a small stadium for the local football team, which enjoyed some success throughout Herzegovina.

Lisičići was coming back to life, but services remained lacking. The connection to the electricity grid – a cruel paradox for a population displaced in the name of energy – came only in the 1970s, after years of pressure. In those years, the National Electricity Company finally recognised the right to adequate compensation to the former displaced persons. To date, however, Lisičići has seen only a small fraction of that money and sometimes, as in 1991, the eternally disregarded protests were forcefully repressed by the police.

The lake became the centre of life for the new Lisičići. "I was born and raised together with the lake", comments Professor Borić with some pride. In the pouring rain, the row of benches, the scaffolding of a gazebo, and a floating platform give off a soft silver glow. In the summer, however, the clear waters are framed by forested mountains, and the reflection that lights them up is that of the sun. The professor's peers grew up rowing, fishing, and especially swimming. In the 1990s, Lisičići swimmers would be among the founders of the National Swimming Federation of Bosnia and Herzegovina. The competition on the lake waters, called Suljo and Mujo like the popular Bosnian joke characters, has been taking place for 25 years.

"Our club has created the only public and equipped coast in the area", says Asmir, the professor's son, who will organise a new sporting event in the summer, a great triathlon competition.

Painful memories surface in the winter, when there is hardly anyone there. During the dam maintenance operations, the level is lowered by several metres and the seabed becomes a desert of mud that soon cracks. In the photos that Asmir sends me, some time later, a group of people wanders among worn stones, in some of which the shapes of fez and turbans can still be guessed. With his arms outstretched, Duraković recites a prayer before the lake closes again on the submerged cemetery.

For Lisičići, things started to move after the war of the 1990s. New regulations forced Elektroprivreda to compensate the municipalities involved, which in turn committed to investing the 50% in infrastructure. In 2010 a bridge was finally inaugurated: after 55 years, the isolation ended. In those years the submerged village was able to count on an exceptional ally, the High Representative for Bosnia and Herzegovina, Paddy Ashdown, who frequented the area and had made friends with its inhabitants.

"Lord Ashdown – rest in peace – will receive honorary citizenship", Zahid informs us as we finally warm up in his house full of books, in front of a steaming pot of coffee. 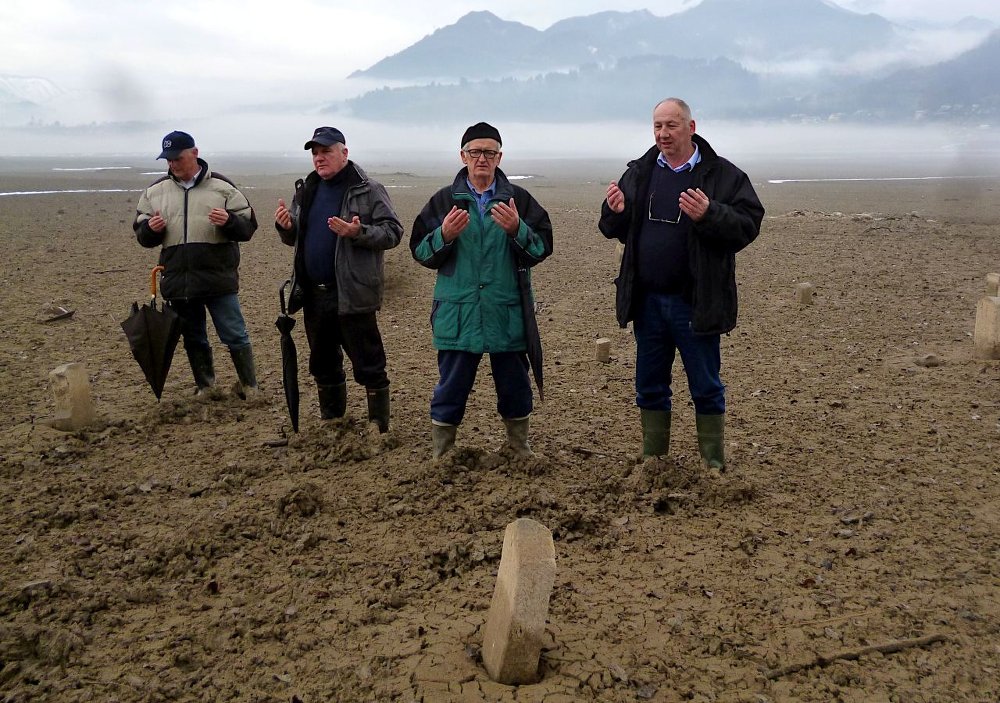 When we leave the rain has finally stopped falling, and Duraković insists on giving us a bottle of blatina wine, the native grape of Herzegovina. Lisičići's fate, we reflect together, takes place in the sign of water. This has always been the case in this country. Today, however, the region's lakes and rivers are more fragile than ever. They are put at risk by climate change, which translates into increasingly irregular rains, and reckless management of water resources. In the winter of 2017, aided by the drought, the level of Lake Jablanica dizzily dropped. The inhabitants of the village were presented with a panorama similar to that before the dam, but in a desolate version, with mudflats and ruins instead of orchards. All over the water-rich Balkans, thousands of new hydroelectric plants are under construction. Today it is impossible to build the large dams of the past, but streams are targeted. Today as then, even a step away from here, on the Doljanka torrent, the inhabitants deprived of the water of their river are ignored, when not explicitly threatened.

Asja, the professor's daughter, shared the history of the submerged village with activists who built a vast movement in defense of fresh water throughout the Balkans. Indirectly, she is the one who brought us here.

A year later, by e-mail, she and her brother Asmir update us on what has happened since the time of our visit which, with the whole world in lockdown, could not be repeated. The triathlon was a success beyond expectations, they say, perhaps the most successful of all the Balkans. The virus will prevent the second edition, but in Lisičići they are already thinking about the third. Compensation for the families of former IDPs remains largely a promise. The Association of Citizens of Lisičići, Asja says, has long understood that it is necessary to go step by step: reinvesting the little public funds or funds coming from ad hoc projects into concrete objectives. The renovation of the small stadium and a noise barrier on the lakefront are planned for this year. In the long term, the memorial could become a real museum. Even the cemetery could finally be moved. "Maintaining the vitality of Lisičići" is the aim of the Association, which largely passes through the lake. It focuses on local and sustainable tourism, on water sports and fishing, on cultural events. Volunteering and, as often happens in Bosnia and Herzegovina, international cooperation play an important role.

A few months ago, meanwhile, a new monument was inaugurated. At the memorial they had shown us the draft of the text to be engraved on the stone. The shape recalls a makeshift boat. Like those on which Professor Borić and Mensur Duraković faced the lake that first destroyed and then restored life to the submerged village of Neretva.