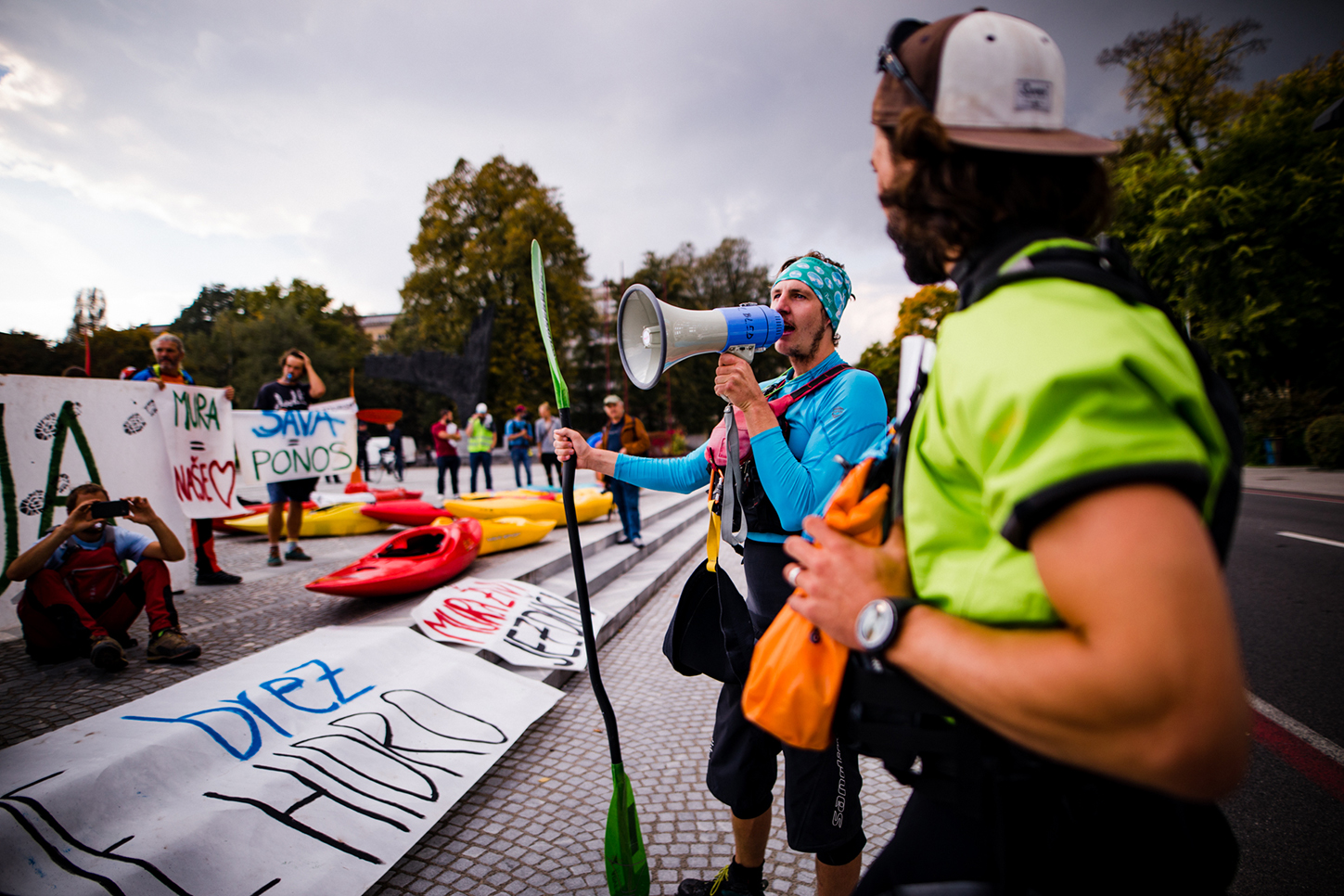 In the Balkans, the construction is planned of 2,800 hydroelectric power plants – mostly small, but with devastating impact on the river environment. A group of activists and an annual Balkan Rivers Tour emerged to defend these waterways

A month of paddling along the Balkan rivers from Albania to Slovenia, in order to protect the future of water courses under attack. This is the “Balkan Rivers Tour ”, which took place from September 7th to October 8th in its third edition, organised by a group of Slovenian activists and with the involvement of many associations and groups of citizens in different Balkan locations.

"We left from the Vjosa valley in southern Albania and went up towards Slovenia through Macedonia, Montenegro, Bosnia and Herzegovina, and Croatia", says Katarina Mulec, one of the volunteers of the collective “Balkan River Defence ”. After 36 days of travel, the Slovenian organisers summarised the experience with some key figures: "5,025 km travelled, 15 actions organised, 1,315 eggs consumed, 2 managers of hydroelectric plants forced to leave their offices to meet the demonstrators, 422 burek eaten...".

What is it about? The threat lingering over the rivers of the Balkans (and beyond) is at the same time very large and little known. In the region, about 2,800 hydropower plants are being built, for the vast majority of small size (with capacity often less than 1 MW), but still able to have a devastating impact on almost all the water courses of the area, which today run for 35,000 km, sometimes without encountering human intervention. Drying streams, diverted streams, flooded areas... the rural landscape of the Balkans is likely to change considerably.

The Balkan Rivers Tour project was born from this observation. Its creator, Rok Rozman, is a rowing Olympic champion, with a long history of love for the rivers of his country (Rozman told about his background and motivations in this TEDx Talk held in Ljubljana – English subtitles). Faced with the hypothesis of seeing all the rivers in his region shredded by dams or forced into concrete channels, Rok Rozman became an activist: "I want to show that protecting nature can really be Rock'n'Roll", he declared.

Hence in 2016 the first tour started, with 33 days of kayaking through six countries and about 20 different rivers, and with 2,000 people involved in organised events. A year later, the programme changed slightly: the itinerary only spread on two rivers, but from the source to the mouth. The duration of the trip remained almost unchanged, with a total of 30 days on the boat. "This year, ten of us left Ljubljana and another 25-30 people joined along the way to paddle with us!", reports Katarina Mulec. 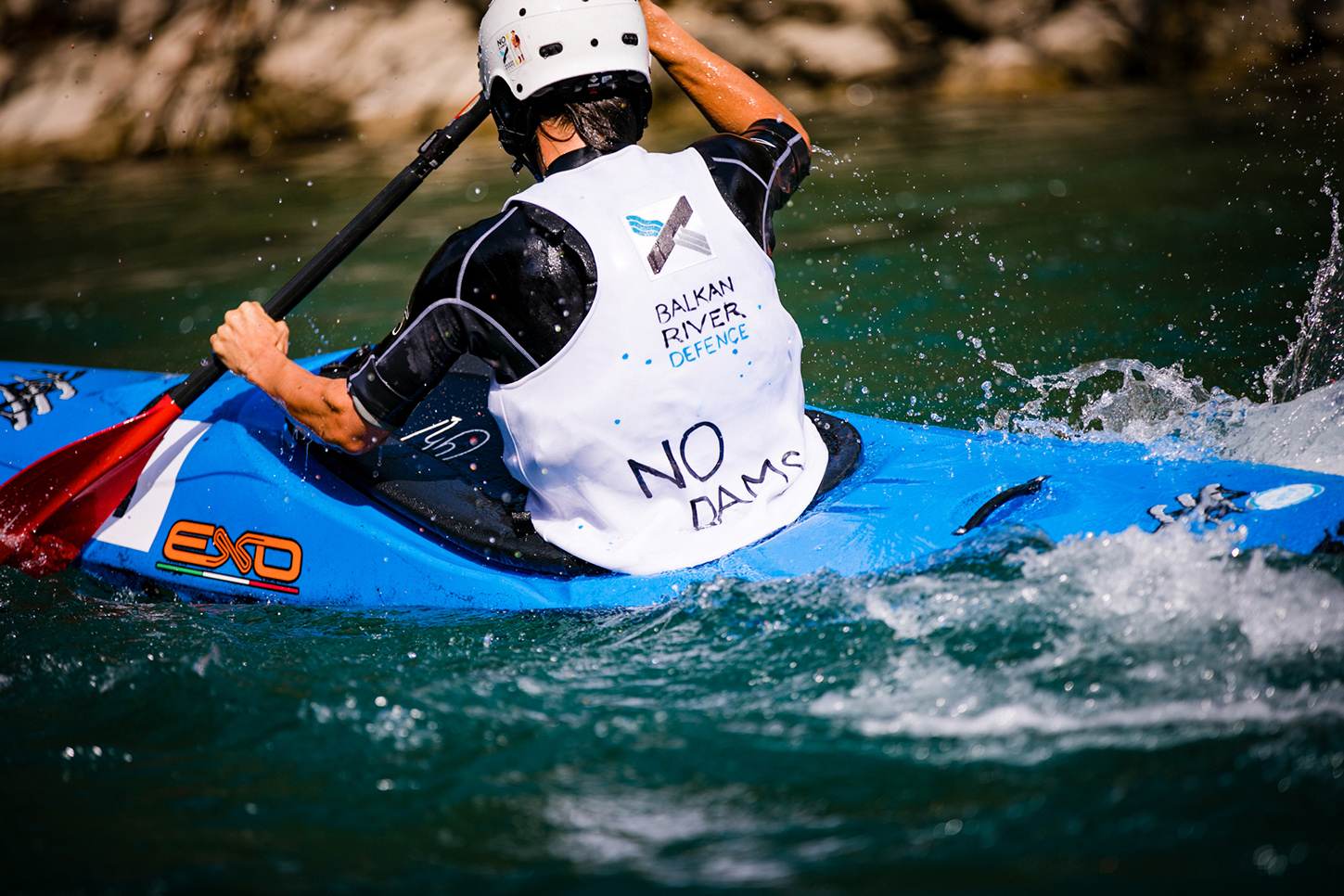 Kayaking on the Tara River (ME) photo by Katja Jemec, courtesy of Balkan River Defense

The summit of European rivers in Sarajevo

The initiative of these young Slovenians, who have been descending the Balkan rivers for three years, might seem anecdotal, but there are many other signs of the growing interest in the situation of waterways in Southeastern Europe. On September 27th, for example, the first European Rivers Summit was held in Sarajevo by various ecological organisations (including Riverwatch, Bankwatch, WWF, Wetlands, and Euronatur) and focused on the question of rivers, dams, and hydroelectric plants.

"This is a common problem in many countries, not just in the Balkans. In Sarajevo, participants arrived from over 30 countries", explains Ulrich Eichelmann, head of Austrian association Riverwatch . "The fact is that in almost all European countries there are subsidies for renewable energy and the hydropower lobby has found a way to exploit them, experiencing today a real boom in power plants", continues Eichelmann. Funded by citizens through electricity bills, thousands of hydroelectric projects are thus popping up across Europe.

"In the Balkans the situation is even worse, because civil society is generally weaker and corruption is higher", adds Eichelmann, who nevertheless notes that "in Albania, Serbia, Bosnia Herzegovina", the population is "rebelling against the many projects for hydroelectric plants". "Stopping construction sites, however, requires a great and constant effort, while the only way to permanently stop this vicious circle would be to exclude hydroelectric from renewable energy subsidies, which should focus on wind and solar", concludes the director of Riverwatch.

"The blue heart of Europe beats in the Balkans"

On the website balkanrivers.net (managed by Euronatur and Riverwatch together with other local partners), you can find a map showing the approximately 2,800 hydroelectric plants expected to be built in the Balkans in the next years. In Serbia there are 200 projects only in protected areas (800 in total); in Albania, one of the last wild rivers of Europe – the Vjosa – is in danger; small Macedonia could soon be equipped with 150 dams... and the list is even longer, threatening areas crossed by – according to Riverwatch – "the best European rivers" (since 80% is still "in good or excellent condition").

Also financed in some cases by European multilateral banks (such as the European Bank for Reconstruction and Development and the European Investment Bank, which together provided over 500 million Euros), micro hydroelectric plants are very profitable investments. "Thanks to the subsidies, profits range from 3.5 Euro cents per Kwh produced to 6-7 cents, even 10 in some cases", explains Ulrich Eichelmann. It is therefore no surprise that, in the face of relatively small expenditure ("even just 10 million Euros for a small structure"), such projects are multiplying.

In Bosnia, even former NBA basketball player Mirza Teletović launched into the business. "Two lawsuits have been filed against him for the plant he wants to build in Jablanica", says Jelena Ivanić from the Banja Luka Center for the Environment (Friends of Earth network). Yet, despite the fact that the site is officially blocked awaiting the verdict, the works have resumed (a few days ago, another demonstration attempted to block the construction). Another famous sit-in in Bosnia was born in Kruščica and before that in Fojnica, where – explains Ivanić – "the local population managed to cancel the project". Slowly, in fact, the inhabitants are organising. To the surprise of the investors, despite the divisions in the country, a Bosnian coalition for the protection of rivers was also born.

The Undamaged, the film

The colourful kayaks of the Balkan Rivers Tour stopped in each of these places, where groups of citizens mobilised against bulldozers and excavators. From the meetings and protests organised together, a film was born: “The Undamaged ”, literally "intact", but the word also contains the term "dam". The documentary, about 45 minutes, retraces Rok Rozman's initiative and the itinerary of the first tour. "We started with the idea of ​​making a short video of the trip, but then we found so many local stories that kayaking recedes into the background", says Matic Oblak, one of the film's main creators.

In Albania, the Slovenians met Olsi Nika and his NGO Eco Albania, committed to stop the hydroelectric tsunami wanted by Edi Rama – 550 new power plants, including 130 completed and 30 under construction. In Serbia, the itinerary also passes through Stara Planina, a natural park where 60 dams are planned. But today, about 80,000 people follow on social networks the groups devoted to the protection of Serbian rivers and protests are organised regularly (the last on September 2nd, says Aleksandar Panić, one of the organisers). "If we let them take water too, there will be nothing left for our children", says Dušica Jovanović, another activist.

This year, the third edition of the kayak tour also aimed to show the community local films made thanks to their contribution. "From this winter on, the film will be presented at different festivals, then in spring it will go to the cinema, and by the end of 2019 on television", anticipates Matic Oblak. For those wishing to learn more, the appointment is on the Balkan River Defence website, where a calendar will appear shortly indicating the festivals in which the film will be screened. Next summer, a new kayak tour will be held and everyone, athlete or not, is invited to participate.