A national park for the Vjosa, the last wild river in Europe 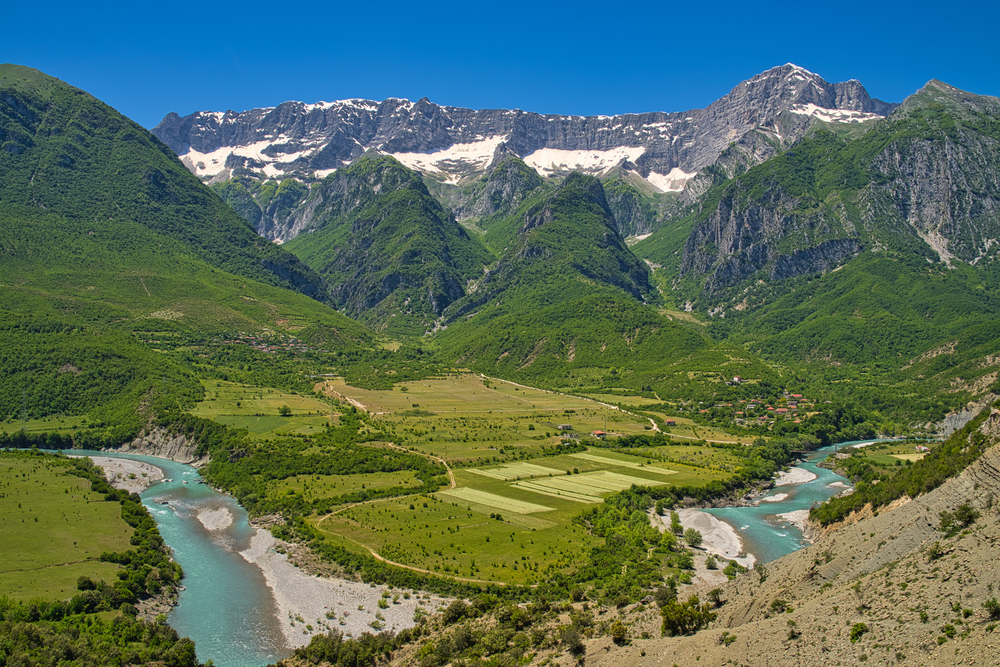 On June 13 the Albanian government committed to establishing a National Park dedicated to the Vjosa, the last major European river free from embankments and dams. The decision follows almost ten years of international mobilisation

The last wild river in Europe will host the continent's first river national park. This is the commitment signed on June 13 by Albanian Minister of the Environment Mirela Kumbaro and Ryan Gellert, CEO of Patagonia, the sportswear brand that for years has supported a mobilisation that has now become global. In the memorandum, signed at the Tirana Opera House in the presence of Prime Minister Edi Rama and representatives of the NGOs of the Save the Blue Earth of Europe coalition, the parties give themselves a month to set up a working group in charge of undertaking all steps to make the park a reality.

Unlike in traditional parks, in a river park it is not a portion of the territory that is protected but the river itself, in this case the Vjosa in all its length, up to the border with Greece and its tributaries. Due to the speed with which water courses evolve and the multiplicity of functions they perform, it is difficult to establish and comply with standardised criteria for this type of protected areas, which are therefore very rare. The Vjosa will be the first in Europe to rise to the status of a national park.

Therefore, many in Europe are watching with interest. If all goes well, the hope is to export the model to the numerous almost intact watercourses of the Balkans, all threatened by hydroelectricity, and also in the mountain stretch of Vjosa itself, in Greece (where it is called Aoos), which already crosses a National Park.

In addition to a management and control system, the park will be designed to welcome visitors, host scientific and educational activities, and provide an economic opportunity for the populations who still live in contact with the river.

The Vjosa has acquired great international visibility a few years ago, also thanks to the stance of celebrities such as Leonardo di Caprio and a very successful documentary – Blue Heart – produced by Patagonia. But the mobilisation to save it started much more quietly, almost ten years ago.

"Forty hydroelectric plants were planned along the Vjosa and its tributaries", says Besjana Guri of the Eco Albania association, one of the first to take sides in defence of the river. "In 2017, together with thirty-eight residents near the river, we won a lawsuit that ultimately blocked a dam in Pocem, in the flat section of the river. A few months later, however, the government authorised the resumption of works on another dam, that of Kalivac, which had begun in the early 2000s and was then abandoned". Amidst ups and downs, a definitive stop to the work would only come in 2021.

Meanwhile, environmentalists had gathered in the Save the Blue Heart of Europe coalition, which unites several Balkan NGOs, the Austrian River Watch, and the German foundation EuroNatur, in defence of all the rivers in the region. The initiatives multiplied, including legal initiatives, demonstrations in the square, crowded concerts, and spectacular kayaking rides. Part of the scientific community was also directly involved. In 2020, some Albanian researchers launched a petition  that would be signed by over 700 scientists from around the world.

In a poll carried out at the end of 2020, 94% of Albanians said they were in favour of protecting the Vjosa. The issue made its entrance into the 2021 electoral campaign, in which Edi Rama – later the winner – had promised the establishment of the national park.

Since then, however, nothing had been done. On the other hand, not very reassuring news leaked, such as that of Shell's launch of an exploration campaign to search for hydrocarbons in the area.

Finally, on January 26 of this year, the government announced the creation of a natural park, and not a national one as expected. “A natural park is too low a protection category”, explains Besjana Guri, “in which hydroelectric plants are not explicitly prohibited. And the proposal did not include the tributaries". A petition  was then launched which to date has exceeded 50,000 signatures, while iconic places from all over the world – including the Grand Canyon of Colorado and the Sydney Opera House as well as the main Albanian and European cities – became the background of enormous writings reading "Vjosa National Park Now".

Finally, after a long negotiation, the memorandum arrived. At this point, save unexpected twists, there are no more big obstacles, also thanks to the now official support of Patagonia. The Californian brand, which invests part of its revenues in environmental causes and has been at the forefront of campaigns for the Balkan rivers for years, is committed to making its “skills and competences available to the establishment of the National Park”.

The Vjosa is born in the Pindus mountains, in Greece, and flows into the Adriatic near Valona. Its turquoise waters, stretching from the narrow gorges of the mountain to the meanders intertwined in boundless gravel beds, are a unique biodiversity hotspot in the region.

The middle stretch alone provides at least 8 habitat types of utmost importance for conservation at European level, while the river as a whole hosts at least 15 globally threatened species and 75 included in the Red List of endangered species in Albania.

In fact, a dam on this river exists in the Greek stretch near the source. But once this first obstacle has been overcome, the Vjosa flows free to flood vast alluvial plains, deposit sediments, and periodically change its course, and so do its numerous tributaries.

The floods provide the villages of Vjosa with fertile soil, while the abundance and diversity of fish is vital for the welfare of local fishermen, especially in the lower part. According to the proponents, the park would be an opportunity for communities living along the river. Before the pandemic, tourism in the region grew by 15% a year and water-related activities, from kayaking to rafting, had more than doubled in just a few years. If carefully managed, the park could offer opportunities along the entire path of the river, without damaging the territory.

"A lot of work remains to be done before we can guarantee the future of the Vjosa", concludes Guri, "but the memorandum is a milestone for Albania and for river defenders all over the world".