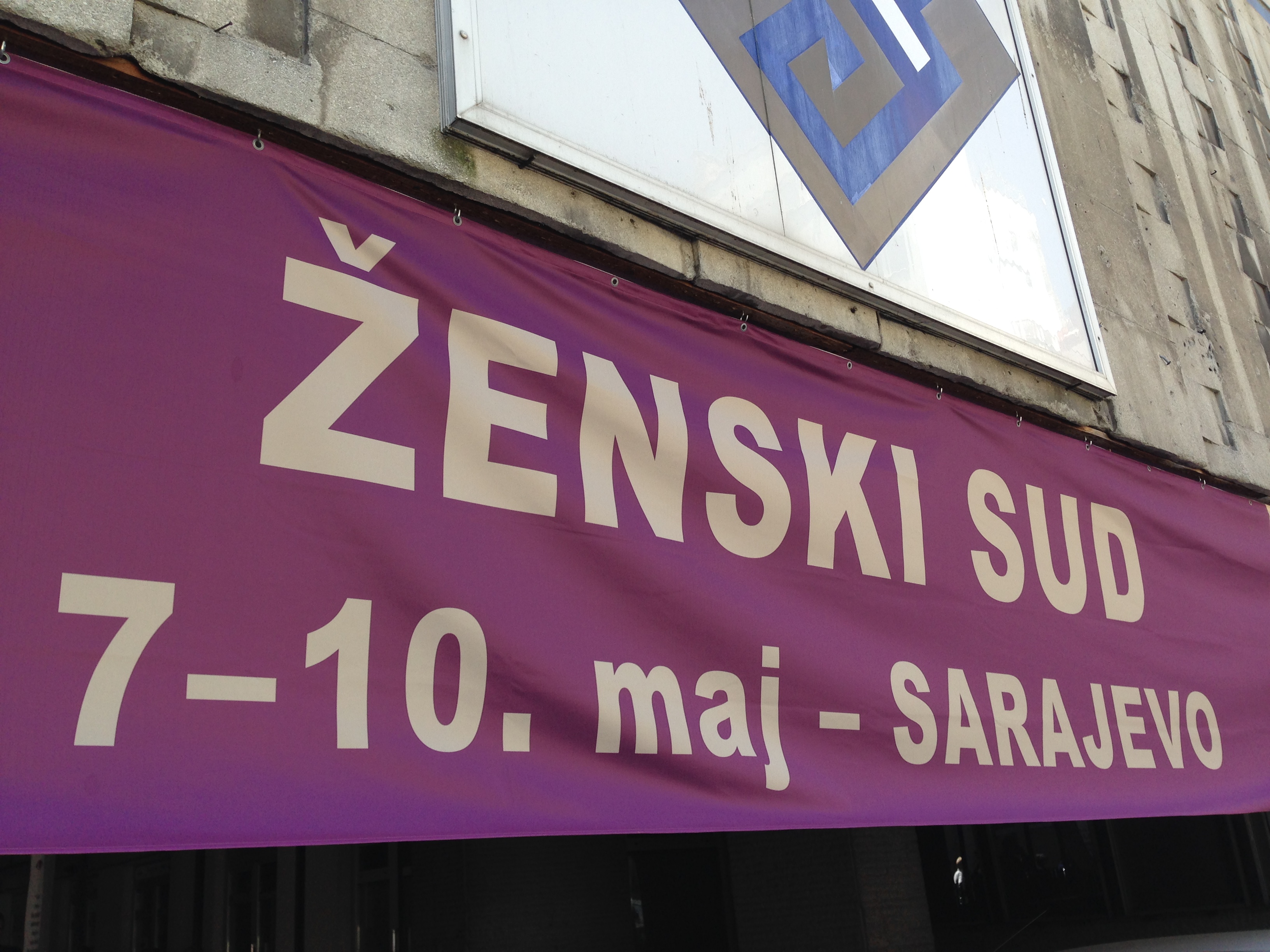 The entrance to the Tribunale (Photo Andrea Rossini)

The first Women's Tribunal in Europe took place in Sarajevo between May 7th and 10th. The participants came from all the countries of the former Yugoslavia

Some hundreds of women listen in silence. On the left of the stage are the witnesses. On the other side are the Tribunal's experts who, at the end of each session, report the stories in the context of the war against women fought in this region, and not only here. We are in the Bosanski Kulturni Centar, the historic auditorium in the centre of Sarajevo. The women speak, one after another, emerging from the penumbra to centre stage. One witness, from a village in eastern Bosnia, tells of the rapes suffered at age 15 in the Bratunac Concentration Camp. She continues describing the post-war solitude, the poverty, her marriage and the start of a new nightmare of violence (“another form of Camp”). When she says of her divorce, that “they took my adolescence, but they won't have my present and future”, the audience rise to their feet and applaud, without stopping. It is not just a sign of respect. It is an exchange of energy. The force coming from the stage, through stories of resistance to indescribable conditions, is conveyed to the audience, and vice versa. Academic language – some of the most important theorists and intellects in the international feminist movement are here – mixes with that of country women with no divide.

The testimonies continue for hours, for three days. Among recurring elements are the continuity of the violence, the length of its consequences for personal, family and community life, the impunity of the torturers (“the murderers still walk the streets”), the misogyny of the institutions, the importance of women's networks (“this is the first Tribunal I've ever been invited to”).

The rules of the Women's Tribunal stipulate journalists may neither record nor take photographs. Only few men are present. At the centre of the whole process are the witnesses, coming from all the new republics of the former Yugoslavia, from Slovenia to Macedonia. Daša Duhaček, who teaches gender studies at the Political Science Faculty in Belgrade, explains the origin of this initiative: “At the end of the 90s some Balkan activists met Corinne Kumar, the Tunisian militant in the Human Rights Organization El Taller, during the Women's Tribunal in South Africa. The idea of setting up a similar structure in Europe was taken up principally by the Women in Black in Belgrade. Some years later, the activists began to work with those women who had resisted nationalism, opposed men's conscription, or had suffered crimes not brought to justice, giving voice to those who had none.”

A feminist approach to justice

“This event comes at the end of a long process in which about 5,000 people have participated”, specifies Staša Zajović of the Belgrade Women in Black. “We worked for about four and a half years with women at grass roots level, then involving academics and artists' collectives. We learned a lot from our Indian friends, we studied various models of transitional justice, but in the end we developed new models and methods. We are not against traditional justice, but we have always known that institutional justice, be it international or local, cannot meet the needs of the victims.”

The writer and philosopher Rada Iveković, also present at the meeting, believes the Women's Tribunal of Sarajevo represents an historic event in “constituting a precedent. At the present moment we are undergoing a situation which is positively a woman hunt, everywhere. Public space, at least in the western world, is slowly opening up to this theme. In the Balkans, however, the situation is different from the rest of Europe, because here the women have begun to speak - this is new and enables us to hope and learn from the grass roots, there where academic theories are not enough. Today's date is one we will be able to refer to in the future, as an event when things were said and documented, and will be preserved in the Women in Black's archive as an extremely important heritage.”

The pivot of the procedure is the women's testimonies. Everything else, including the role of the media, takes second place. For all three days the emphasis is on the need to guarantee security and respect for the women's words. “Listening, in a safe space, we grant recognition to the pain they have suffered during and after the war,” explains Lepa Mlađenović, consultant at the Belgrade Centre against Violence towards Women. “We want to know what happened, but also to share their situation emotionally, so they do not feel alone. This exchange between the stage and the audience is extremely important, the applause is important – it means yes, you survived, yes, we know the pain you had to suffer, yes, we fell solidarity with you as women and share your need for justice. Because these encounters also serve in emotional healing, but naturally we want justice.”

Nora Morales de Cortiñas, of the Plaza de Mayo Mothers, who came to Sarajevo to take part in the work of the Tribunal, enlarges: “Perpetrators of genocide, torture and rape must stay in prison for life. No amnesty is possible. This is not vendetta, it is justice.”

At the end of the testimonies, on Sunday morning, the Judicial Council of the Women's Tribunal, consisting of feminists, writers and activists (Vesna Rakić, Gorana Mlinarević, Chris Campbell, Latinka Perović, Charlotte Bunch and Vesna Teršelič), takes the floor. Recommendations and preliminary verdicts are read. The criminal system described is much wider than that taken into account by traditional justice. The responsibility of states, religious institutions and the media are all taken into consideration; not only the war victims are considered, but also the victims of criminal processes of post-war privatization, and new criminal counts such as forced conscription. Before the reading, though, concern is expressed for Macedonia, “on the edge of a precipice”. These days of Sarajevo are not addressed to a remote past, but to the present. Rada Žarković, a Bosnian Woman in Black and founder of the cooperative “Together” in Bratunac, reminds me that “the women's networks were the one thing that worked even during the war, in impossible conditions. The awareness of this strength has grown from the experience of this Tribunal, beyond all my expectations. This is important also for what could happen in the future.”

The final decisions of the Women's Tribunal will appear in a few weeks on the portal Ž enski Sud .