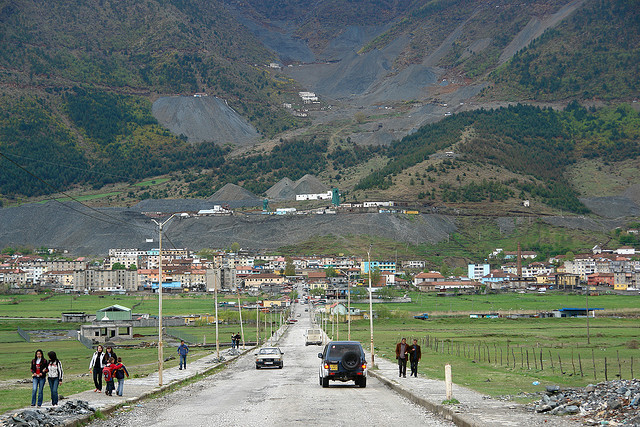 According to several reports, the criminal organizations in the Balkans are strenghtening their positions and diversifying their activities. The "Balkan routes", traditionally used to smuggle heroin towards Western Europe, are increasingly used to smuggle cocaine and for human trafficking operations. From Bright magazine

In respect to the main heroin problem in Europe, it was depicted that, almost all European heroin originates in Afghanistan, mostly smuggled in through Turkey and the Balkans or via Central Asia and Russia. According to the report, the four top national markets in Europe account for 60% of all European heroin consumption. They are: The UK (21%), Italy (20%), France (11%) and Germany (8%).

The issue is certainly of a long-term nature and what is interesting is the inability of any concrete action by either the national governments or the supranational bodies to deal with it.

The 2007 World Drug Report issued by the United Nations Office on Drugs and Crimes is pointed an alarming new drug alliance between the notorious South American drug lords and the Albanian drug mafia in the Balkans that already controls much of the wholesale network in Europe.

Under section Concerns about cocaine along the Balkan route (p 83):“While most cocaine shipments from South America continue to be directed towards Western Europe… some shipments to East Europe and the Balkan countries have been noticed by enforcement agencies.”

Further back in recent times, while the 2005 UN Drug report identifies Kosovo Albanian organized crime groups responsible for controlling heroin market, the 2007report, additionally, identified them as developers of the new traffic routs through which they augment their heroin trade with South American cocaine:

“This raises concerns about the development of new trafficking routes and/or the incorporation of cocaine into the range of products offered by traditional heroin trafficking groups operating along the Balkan route,” says the report then added that Albanian drug gangs control ports in Romania, in addition to ones in Montenegro (Bar) and Albania (Durres).

“Some cases of cocaine shipments via the Black Sea to Romania and via the Adriatic Sea to Montenegro often organized by Albanian criminal groups have already been observed,” says the report.

Thus the traditional narcotics market structure has evolved further over the previous years and now the smugglers are able to exploit both the main road corridors of the region from East to West and South to North, but also got a hold of the main sea trade import bases and revealed themselves into a greater and global role.

The US State Department International Strategy for Narcotics Control report, released on March 2010, says that the Balkan countries remain major transit points for Afghan heroin, while the war against traffickers is hampered by corruption and weak state institutions. According to the report, Albania, Bulgaria,  Kosovo,  Serbia, Croatia and Bosnia and Herzegovina are used by narcotics traffickers to move Afghan heroin from Central Asia to destinations around Western Europe.

To a lesser extent Romania and Montenegro are also considered as staging posts for traffickers. Apart from being an important transit country for heroin and cocaine, Bulgaria is also a producer of illicit narcotics, the report says. With its geographic position on Balkan transit routes, Bulgaria is vulnerable to illegal flows of drugs, people, contraband, and money.

The Interpol is quite specific in identifying the real importance of the Balkans in the present day European narcotics market. According to the research of that organization, two primary routes are used to smuggle heroin: the Balkan Route, which runs through southeastern Europe, and the Silk Route, which runs through Central Asia. The anchor point for the Balkan Route is Turkey, which remains a major staging area and transportation route for heroin destined for European markets.

The Balkan Route is divided into three sub-routes: the southern route runs through Turkey, Greece, Albania and Italy; the central route runs through Turkey, Bulgaria, the Former Yugoslav Republic of Macedonia, Serbia, Montenegro, Bosnia and Herzegovina, Croatia, Slovenia, and into either Italy or Austria; and the northern route runs from Turkey, Bulgaria and Romania to Austria, Hungary, the Czech Republic, Poland or Germany. Large quantities of heroin are destined for either the Netherlands or the United Kingdom.

The magnitude of the organized crime groups in the region can be well illustrated by the recent case of the “Saric network” in Serbia. The organization of Darko Saric, now a fugitive from Serbian justice, has funnelled 1.3 billion euros to Serbia, but may have amassed up to 5 billion, according to the investigators. Saric and his companions laundered the narcotics money through companies in Serbia, Montenegro and “some Western European countries”.

Moreover, the powerful crime clan, said to be one of the major cocaine suppliers in Europe, was involved in the attempt to smuggle 2.7 tons of cocaine to Europe in the autumn of 2009 from Latin America. Since the sheer amount of this trafficking attempt is quite substantial, it can be estimated that the nexus between the South American cartels and those in the Balkans are truly becoming stronger and of importance for the world police authorities.

Furthermore, reportages by Bulgarian media have revealed that Bulgarian criminal gangs are among the major cocaine traffickers in South-Eastern Europe. More specifically, a Darik News investigation noted that “Over the past months local drug dealers have abandoned the heroin trade, because of the drug’s high price and the low demand and they switched to cocaine”.

The Bulgarian journalist Nikolay Hristov reported, that in total of five major organizations in the Balkan country have their hands on the cocaine market. Similar findings were said to be found for Greece also, where in Athens 5 well-organized criminal gangs control the local cocaine market with Greeks, Albanians, Bulgarians and Georgians to act as kingpins of such illegal trade.

The perils associated with organized crime activities in the Balkans have long been associated with wider ramifications in other countries due to the penetration of the European crime scene by Balkan groups. For instance about 80% of the Hungarian heroin market is controlled by the so-called Albanian mafia, which then invests its profits from that country by procuring weapons from Italian crime groups.

Therefore the criminal syndicates not only exploit local markets and facilitate the spread of illegal substances, but also assist into funnelling further criminal action on other countries and finally create a wide network of illegal activities that involves a large number of individuals and serious problems for the Authorities in different states that find it hard to either control or even identify the complexity of the situation.

Since the Balkans are one of the main import points and staging grounds for the expansion of organized criminal activities in the EU, a pan-European anti-crime policy is expected to be centred in that region. Moreover the security authorities should be aware of the flexibility and the adaptability of the criminal groups that seek to maximize their returns at any given moment and in many instances they tend to create an illegal market as soon as they realize that a need has to be met by non-legal means.

For example, it is quite likely to expect a shift from the traditional trafficking operations that transfer immigrants from Asia and Africa to Europe, towards an inter-European trafficking movement of illegal immigrants that have been stuck into countries with low or even negative economic growth. The case of Greece is significant, since the country will have a -5% drop in GDP in 2010 and possibly another -4% in 2011. Already there is an exodus of immigrants from the country; nevertheless, the illegal ones from Asia and Africa find it quite hard to move elsewhere due to lack of documents.

It is estimated that approximately 400,000 individuals are in such situation in Greece, who are risking of no employment within the coming months, due to the dramatic drop in the construction business and the recession in the commercial and industrial sectors. If one adds the numbers of illegal immigrants in Spain, Portugal and Italy that face similar concerns; a new illegal market seems to be opening that is almost certain that would be taken advantage of by the same networks that presently deal with trafficking in weapons, narcotics and persons.

The divergence in economic growth in the EU and the rise in unemployment in at least half of the EU member states will inevitably provide to be yet another “golden opportunity” for the Balkan mafia, as the wars of the 90’s were for contraband trade, and the ease in travel in the 00’s for their money-laundering operations and their spectacular global criminal expansion.

This article was originally published on Bright Magazine, a project funded with the support from Prevention of and Fight against Crime Programme European Commission - Directorate-General Justice, Freedom and Security.