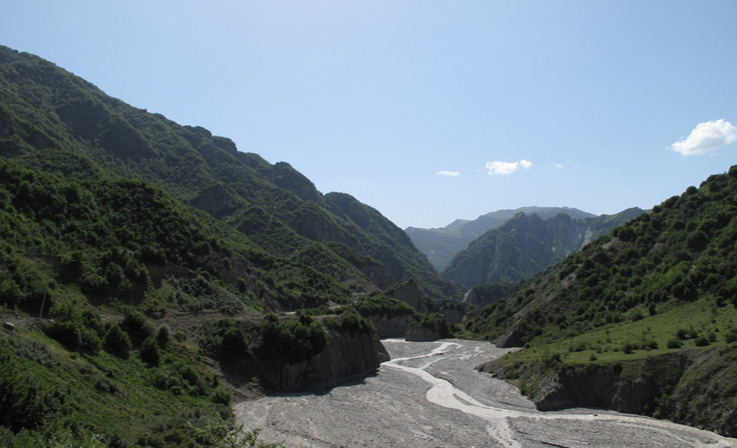 A few days ago, the writer Akram Aylisli was due to participate in the Incontri di Civiltà literary festival in Venice. Azerbaijani authorities prevented him from attending. This is the speech he could not read

The following is the speech in full sent by Azerbaijani writer Akram Aylisli to the Incontri di Civiltà festival. The speech was read in public by Prof. Aldo Ferrari. Azerbaijan authorities prevented the novelist and Nobel Peace Prize nominee from leaving the country and detained him at the Baku Airport for more than ten hours. On his release, the writer was told he would be charged with “hooliganism”. The 78 year old author has actually been charged with hitting and injuring an airport guard, which the writer denies. We thank the editors Guerini and Associates and the Festival management for making the text available to us

Still in Baku, while thinking how to begin my speech, these disturbing words came to mind: “A completely defenceless person stands before you”. But immediately my inner voice, troubled, said: "Don’t complain, don’t grumble like an old man. You are certainly not the only person in the world in this situation and there are those who are more defenceless than you!”

Dear colleagues it is unfortunately true. We are all defenceless in an era of unthinkable cruelty.

There are times in history when nothing will fill the emptiness in the human heart; not religion, not science and not even literature. The spiritual and artistic authorities have been irretrievably lost in the past. State institutions in the most advanced countries have not been able to find a way out of the moral and spiritual dead end in which we find ourselves.

At one time my fellow citizens and co-religionists spoke badly of the Soviet regime because they had closed our temples. Today, the number of mosques in my country is equal to the number of schools, but this does not bring some of my compatriots closer to heaven.

There is not much room in the churches and the mosques, nor is there room in the heads. People no longer have the strength to look to the future with hope and man has no longer the time to look at his soul. The level of culture has gone down worldwide, and we no longer find safety in culture.

God, this world freezes me

Excuse me if I wonder through the house in a coat

Here we have destroyed all that is yours

And nothing which is ours warms us

It is difficult to explain the ache in our hearts better than the young Russian poet has in these few lines. Today we are all impotent. Not just the single person, but whole nations have found themselves defenceless.

Nobody will take responsibility for political criminal actions - in Chechnya, Yugoslavia, Iraq, Libya, Syria, Yemen, Donbass - which have cost the loss of hundreds of thousands of lives and ruined the destiny of millions.

As Solzhenitsyn said, violence and lying go hand in hand. Violence does not go alone, it can’t; it is always mixed with lying. Nothing can hide violence better than lies.

Violence is not only the acts of terrorism seen today as never before in many parts of the world, bringing fear for our lives and those of friends and family. Violence is not less terrible because it comes hidden in our conscience, scars our hearts and kills the faith in good and justice. It leaves us impotent in front of ignorance and obscurantism and deeply confuses good and evil.

A great number of men with nothing in their souls or only evil emptiness, hide behind the idea of nationalism, plant the seeds of hatred between peoples and nations who until then had lived peacefully side by side.

The nationalist is to be feared as he is by nature a hard-hearted optimist who refuses a tragic understanding of life and he radically opposes the truth. His, is an uprising against religion and humanity, a brazen lie generated by cruel men who take it upon themselves to have the right to present the only just ideas and fight for the happiness of the populace. And a patriotism imposed from above provides these fascistic bastards with the opportunity to transform the people into a brainless crowd. But we know that what is closest to a crowd can easily be bought. And that to address a mass as a crowd can produce lasting evil obscurantism.

When you live amongst sinners, the sins stick to you. A writer is a true writer when even in the most extreme conditions he can conserve a clear conscience faced with true authenticity.

“Truth is greater than Nekrasov, than Pushkin, than the people, than Russia”, wrote

Dostoevsky. Another writer, a contemporary, Salman Rushdie, warns: “Be careful of writers who say they are the voice of the nation.”

To be loved by the masses a writer can write as he likes and what he likes, but only a few writers have been loved by their readers. All true literature is an honest path, a way travelled by the mind and the sentiment of the writer. A writer is not such because he is adored by a mass of readers. A writer is such if he genuinely expresses permanent moral values and the public entrusts him with their pain. A writer is a teacher come from the heart of the people and is absolutely not guilty if the politicians do not understand his magic ability.

The psychology of power cannot bear those writers who have their own vision of decisive events occurring in the life of the people. The authorities have been cruel and merciless.

But I don’t want to dwell too long on this. I don’t want to shame my small country before a foreign audience; and I would not love my country less because of what the present government has done to me. My history has many sad tales, but also many which are useful and instructive.

I have reached my main goal now with my small work, also published in Italian. That is to save many Armenians from hate towards my people. I have understood that in this bloody conflict neither we nor the Armenians are guilty. The people would never come to war if politics did not interfere with their lives. I am convinced once again that our people are good in themselves, but together they are simply wonderful. I have always known that the invisible becomes visible only through suffering. Now I have come along this path with my steps, trying not to trip, not to fall. My soul had obviously to be troubled again in order to become conscious and understand itself among a multitude of people ready to sell themselves and periodically betray.

There are some episodes in life which are worth many lives. In this episode of my life I am a hero for some and a traitor for others. Personally I have never thought for one moment that I was a hero, nor even a traitor. I have always thought of being a normal writer and humanist capable of pity for the suffering of others.

I have found myself in the same situation as Galileo, who didn’t doubt for one moment that he was right, but couldn’t convince the rusty minds of the keepers of the dominant dogma.

I have lost peace of mind and wellbeing because of a small step taken to bring together two similar people, not only linked geographically, but also by many centuries of history. My most intimate dream is to see them together again. And I really hope to live to see this happy day.