Akram Aylisli, a writer under restrictions 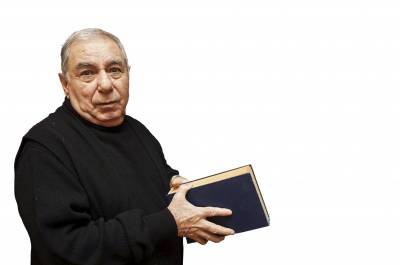 Azerbaijani writer Akram Aylisli was expected to take part to the “Incroci di civiltà” International literature festival today in Venice, but the Baku authorities blocked him at the airport. Our interview

After more than 10 hours of detention by police at Baku airport, yesterday evening the Azerbaijani writer Akram Aylisli was finally released. However the author, 78, candidate for the Nobel Peace Prize, will not be able to attend the event scheduled today in Venice. Police has prevented him and his son to take the plane to Italy at five in the morning, local time.

The organizers of the festival Incroci di Civiltà , which Aylisli was due to attend, issued a statement expressing “regret” for his absence, confirming "the event scheduled [...] which will focus on the work of the writer.” The publisher Guerini e Associati, who has just released an Italian translation of his novel Stone Dreams, said that he “considers this act as an intolerable restriction of the personal freedom and a physical obstacle to the free movement of ideas and to reconciliation, even more so in a socio-political context in which mediation skills are increasingly necessary.”

News about his detention were spread soon yesterday, and an article on the Aylisli case appeared also in the Guardian .

It’s not the first time that the writer ends up being targeted in his country. The publication of Stone Dreams, four years ago, had put him at the centre of an unprecedented campaign of hatred because of the free treatment of controversial issues in his country, such as the Sumgait massacre, one of the bloodiest episodes in the Nagorno-Karabakh war. Demonstrations and public burnings of his books – and even a reward of about 10,000 Euros made available by a local politician for those who wished to cut off one of his ears – were some of the effects produced by the publication of his novel.

The reasons for yesterday’s events are still not clear. According to an official statement issued by the Ministry of Interior in Baku, it would be a consequence of an unspecified “conflicthe had stirred with the staff of the border service”. Something rather curious, knowing the novelist is 78 years old.Giorgi Gogia, South Caucasus Director of Human Rights Watch told us of “a clear attempt of intimidation against one of the finest and bravest writers of Azerbaijan”.

“The authorities – Gogia continued – did not explain to him the reasons for restricting his movement, but this falls squarely into the government tactics when travel ban is just one tool to intimidate and harass those who think differently.”

We interviewed the Azerbaijani author shortly before his long detention at the Baku airport. In the occasion, the author didn’t make any mention of his fears about the journey that awaited him in a few hours.

When did the first idea of Stone Dreams come to your mind?

It seems to me that the pain I described in the "Stone Dreams" was born together with me in the same place I described in the book – in the village of Aylis. I just could not help but write this novel. I wouldn’t have written it if the new conflict between Azerbaijanis and Armenians had not started.

Although not very known to the general audience in Europe, Nagorno-Karabakh is one of the most polarized conflicts of our time. In your book you speak freely about taboo episodes such as the Sumgait massacre. Why did you decide to do it?

I wasn’t an eyewitness of the Sumgait events. But what happened in Baku on 13 January 1990 [date on which occurred a pogrom against the Armenian population of the Azerbaijani capital ed.] was a personal tragedy for me. It is just unthinkable that yesterday’s good neighbours had become bitter enemies. As to having courage to write about “taboo” topics – I don’t think that was anything requiring particular courage. I think that for a writer it’s a normal moral action. A writer should honestly express eternal moral and spiritual values. It’s not his fault that the politicians cannot understand that.

What were the consequences of the publication of the book for you and your family? Once you spoke about “Stalinism” to describe that period of your life.

Did you get signs of solidarity in your country after the publication of the book?

Many people felt solidarity with me. Many of them were afraid to publicly express their opinion. But in the first few days of my oppression, well-known authors came to my defence: Tamerlan Badalov, Etibar Aliyev, Gunel Movlud. Very special and significant support was given by many famous writers and journalists: Andrey Bitov, Viktor Erofeev, Sergey Kaledin, Denis Gutsko, Lev Anninsky, Boris Akunin, Alla Latinina, Shura Burtin and others.

Why did you decide to continue to live in Azerbaijan, instead of leaving the country for having a more comfortable life?

First, no side, no country offered acceptable conditions for relocation for my family. Second, I didn’t have that much desire to leave my country, which I have not started to love any less after all of that was done to me by the authorities.

What are your present and future plans? Are you working on some books?

I continue to write and get published. Recently my new short stories were published in Russia, Latvia, and U.K.

This year for Nowruz several political prisoners were released in Azerbaijan. Do you think this may be a shift to a more democratic environment in the country? How do you evaluate the present situation?

I'm happy for those freed. I hope all the prisoners of conscience are freed, and in the future not a single one of them will be imprisoned anymore.

What is your hope about the future of Azerbaijan? Do you think we will have peace one day in Nagorno-Karabakh?

Peace in Nagorniy Karabakh requires leadership in Azerbaijan and Armenia that has a big picture in this conflict. Leaders with large-scale vision who would care for the common interest of both people and the prosperity of the whole region of South Caucasus. Until the leadership of each country is only fighting for their own national interests, the conflict may not be solved.