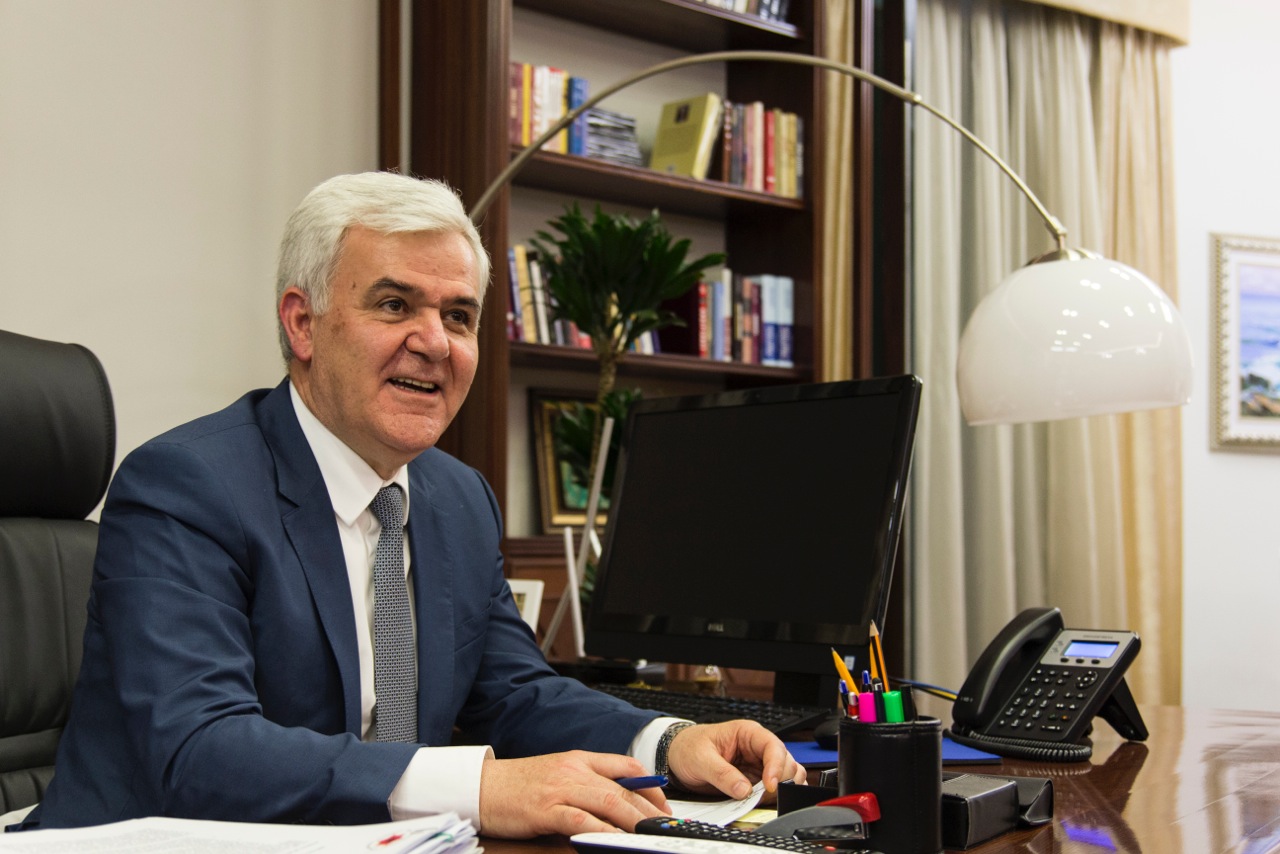 The Albanian Minister of the Interior Fatmir Xhafaj - Giovanni Vale

An in-depth analysis of relations between organized crime, drug trafficking, and politics in Albania

"Albania is no longer a producer of marijuana", assures Albanian Interior Minister Fatmir Xhafaj. But Nicola Altiero, Brigadier of the Fiscal Police in Bari, replies: "We have seized 860 kg of marijuana and hashish in 2015, 13.9 tons in 2016, 34.9 tons in 2017, and almost 10 tons in the first four months of 2018", adding that "the assets seized were produced no more than six months earlier". The first chapter of this investigation ended on this obvious contradiction.

How is it possible that, despite the announcement of a "merciless war against drugs" in 2013, the Italian Fiscal Police's planes photographed a boom in cannabis plantations in Albania between 2013 and 2016? How is it possible that, despite the destruction of open-air plantations in 2017, Albanian marijuana continues to land on the coast of Puglia? For the Albanian opposition, there are no doubts: "Edi Rama's government allows cultivation to gain a political advantage", argues Lulzim Basha, leader of the Democratic Party (PD).

However, the opposition itself has to deal with various corruption allegations and has a credibility problem. Basha, who was Minister of the Interior under Sali Berisha (2009-2011) and mayor of Tirana (2011-2015), is perceived by the electorate as part of that very system he criticises, to the point that only 28.8% voters chose the PD in the general elections of 2017 (in a continuous decline since 2005, when the party was over 44%). Without much effort, therefore, Rama can reject the accusations of the Democratic leader. In order to answer the initial questions, one must then turn to the news and retrace the scandals of the recent years.

The case of Saimir Tahiri, the Minister of the Interior under investigation

When it comes to links between the drug world and the Tirana authorities, the most famous story is that of Saimir Tahiri, former Interior Minister of the first Rama government (2013-2017), today under investigation for drug trafficking and corruption. The one that Rama considered "[his] most popular minister" became in fact implicated, at the end of 2017, in an investigation by the Fiscal Police of Catania – the operation "Wind Rose", which dismantled a criminal network accused of importing into Italy arms and tons of cannabis from Albania for a total of 20 million Euros.

Among those arrested is also Moisi Habilaj, considered as the head of the cartel and already known to the Albanian press. At home, the Habilaj brothers have already been accused of drug trafficking towards Italy and Greece, starting with the revelations of Dritan Zagani, the Albanian policeman who first denounced the collusion between politics and traffickers and who obtained political asylum in Switzerland in 2015. Moisi Habilaj is a cousin of Minister Tahiri and, in the phone calls intercepted by the Fiscal Police, he mentions the politician speaking of debts still to be paid to those who help him.

Since the first revelations of Dritan Zagani, Edi Rama has defended his minister. The Prime Minister accuses Zagani of being "a criminal" and "a collaborator of drug traffickers", and denounces a "smear campaign" against Tahiri. Even after the operation of the Fiscal Police, when an investigation was opened in Tirana against Tahiri, the Albanian Prime Minister has been backing his fellow party man, merely expelling him from the parliamentary group of the Socialist Party, but without depriving him of his parliamentary immunity.

Only in the beginning of May 2018 – six months after the Sicilian scandal – did Saimir Tahiri resign to face justice "as a common citizen". He was confined to house arrest, but a month later he was free again. "We have received information from independent sources that speak of serious pressures on this case, with lots of bribes offered to the judges", warned US Ambassador in Tirana Donald Lu on the eve of the court decision. Yet, at the end of May – pressures or not – the judges decided to end house arrest for Tahiri.

The Albanian Pablo Escobar and the power of the traffickers

The story of Saimir Tahiri – still to be continued – may seem incredible, but it is not the only case. In fact, Greece is still asking Tirana to arrest Klement Balili, the Albanian businessman that the regional press has named "the Balkan Pablo Escobar". The story is not a new one: in autumn 2016, the Athens authorities published a report of over 10,000 pages on Balili, accusing him of heading a large drug cartel, also with links to Italy.

But what does the Rama government have to do with this? Balili, owner of a luxury hotel on the Albanian coast, was appointed Director of Transport of the border region of Saranda in 2014. Yet, as early as 2006, Balili had been arrested for international drug trafficking. Why entrust him with transport management in a region close to Greece then? In 2016, in addition to delivering an extensive dossier in Tirana, Athens also issued an international arrest warrant against Balili. Yet, two years later, the Balkan Pablo Escobar is still on the run, unnerving foreign ambassadors in Tirana.

What is the relation between traffickers and politics in Albania? For Fabian Xhilla, an expert on Albanian organised crime, "drug money has become the money of politics". "Political parties have their own strong local support, which funds electoral campaigns through drug money," explains Xhilla. The report "The evolution of organised crime in Albania", published in 2017 by Open Society Albania, explains that "organised crime, business, and politics have become interconnected in a complicated network of common interests and exploitation for a mutual benefit".

In this intricate context, Albanian political parties accuse each other of links with crime organizations. But beyond the individual cases – which remain serious due to their political implications – what matters most for the country are the economic and social consequences of this mix between politics and crime. "Currently, there are criminal organisations that have managed to get into politics, business, the media, and even social and educational activities. Many of them control territories, produce substantial investments, and actively influence Albanian politics", reads the Open Society report.

"Albania is no longer a producer of marijuana", says Minister Xhafaj, but drug trafficking continues to have important effects on Albanian society. In the next (and last) episode of this investigation, we will analyse precisely the impact of the drug industry on the Albanian economy and new developments in trafficking.