Political theatre in Kosovo: a fight on many fronts

The Perpetual Theatre of Kosovo 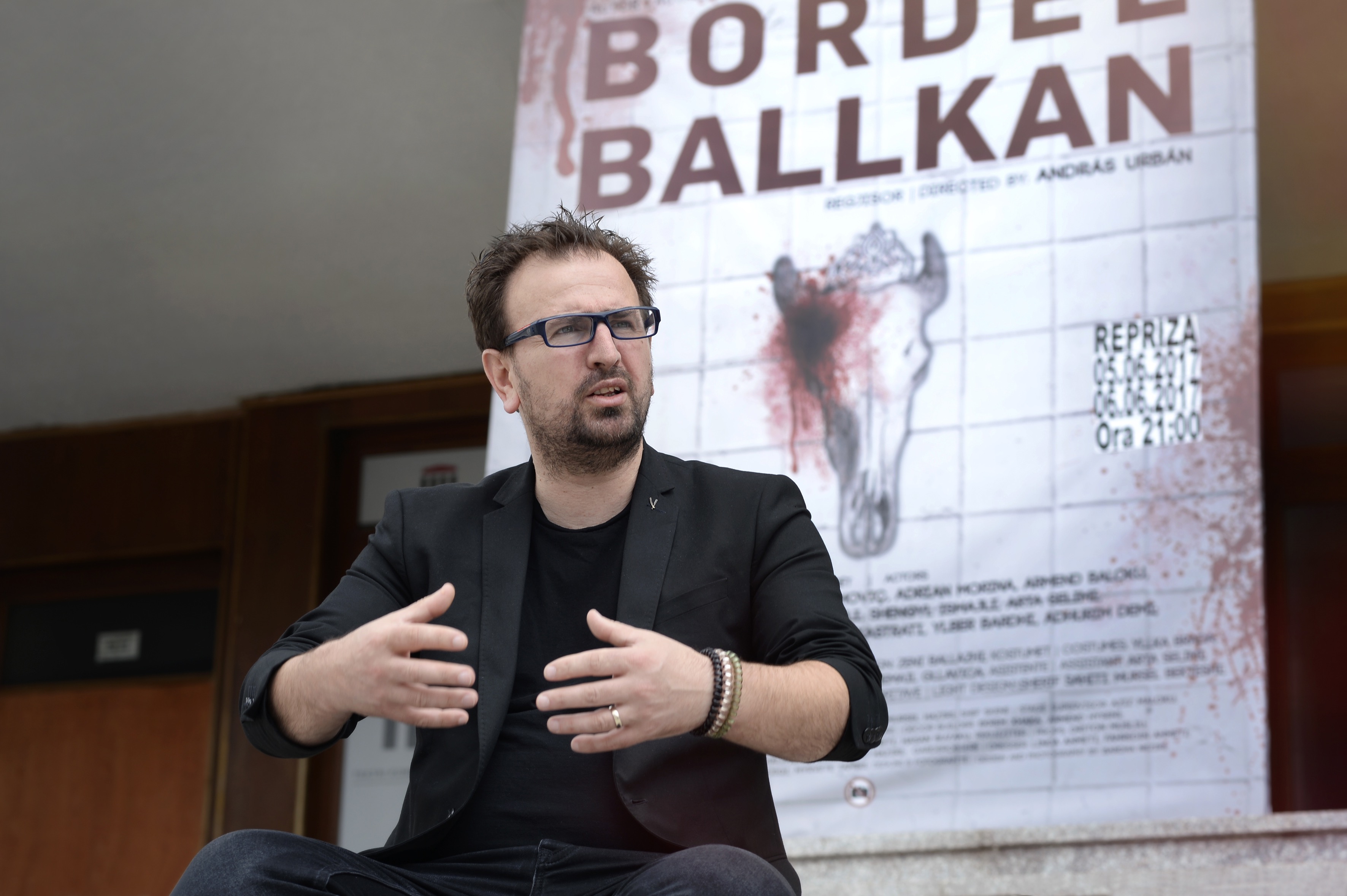 An interview to playwright Jeton Neziraj on the power of political theatre, on Kosovo-Serbia relations, on the recent EU enlargement veto, and much more

Playwright Jeton Neziraj took his play “Peer Gynt from Kosovo” to Lyon, France, within the theatre festival “Sens Interdits” . The story is about an ordinary guy who turns first into a criminal in Europe, then into a foreign fighter in Syria.

You wrote the play in 2014 - does that mean that extremism was an issue in your country at that time?

The original version was about this young Peer who comes to Europe full of dreams and finds bureaucracy and contempt instead. In the original play, he returns to fight the Kosovo war in 1999. In 2017 I knew that I wanted to write something about radicalisation in Kosovo, and we definitely thought that we could adapt “Peer Gynt”’s script. At that time in Kosovo, there was a wave of young Kosovars going to fight for ISIS, and many of them were posting videos on social media inciting the youth in Kosovo to join them. We took the new play to several Kosovar towns, especially where young people were more radicalised. For example to Kaçanik/Kačanik, where the ISIS commander Lavdrim Muhaxheri was from: a scene in the play makes fun of one of his speeches. We wanted to present the play and start a dialogue with the young audience. It was not at all easy to perform it in that period, but I think it had a good impact: young people were open to discussing, they admitted that those radical messages were false or manipulative. Of course, there are always these nasty boys who say that you are insulting their heroes. Here and there we had some young people leaving the theatre; for those who had relatives in Syria, the play was hard to watch.

Is radicalisation still an issue in Kosovo?

Not really because the government, the civil society, and the international agencies, everybody reacted strongly. In less than two years, the wave of foreign fighters from Kosovo to Syria was stopped. The government even approved a law that prevented Kosovars from taking part in other countries’ wars.

Would you say that you put on stage the inconvenience of the society you belong to or, rather, what bothers you most?

Of course I am concerned about all the problems of the Kosovar society. But I am aware that those problems sometimes may be very local, so I try to find some 'universal connections'. My last play “In Five Seasons: Enemy of the People” is about the struggle of Kosovar architect Rexhep Luci against the postwar construction mafia, but the ethical issues underneath it are universal. I try to see the issues in a broader context because I do not want my plays to expire in a heartbeat.

What were the reactions to the play abroad? My feeling is that the non-Kosovar audience is forced - while laughing - to question their bias.

We are touring internationally because the play is not only about Kosovo. France has coped with a similar problem, and somebody told me these days that no theatre here would produce a play in which you mock the jihad: I guess this means that the artists enjoy more freedom on stage in Kosovo. In my opinion, this play is about emigration, about hope in the so-called ‘European dream’, and about how society, in most cases, is not ready to deal with immigrants’ traumas. By exaggerating clichés on stage I want to deliver a human message: Peer is a drug dealer, a criminal, but in the end, everybody feels empathy for him. This is what we miss in society: getting to know others’ personal dramas. In Germany, in Stuttgart, some people came out of the theatre crying and we did not expect it.

There are some similarities between your Peer Gynt and Ibsen’s: both were raised in difficult environments, they dream a lot, they travel, they mess up, they ‘find themselves’ eventually. Am I missing any other connections?

90% of the play is based on a real story that I reported in a book: “Yearning in a suitcase ”. When I wrote the book, I thought that this young guy had something in common with Ibsen’s Peer Gynt. They both share this extreme desire to explore the world with no bad intention, at the beginning. Some little elements of Ibsen’s play have remained, such as the ones you mentioned, the onions, or the relation between Peer and his mother.

Is Ibsen a benchmark for you? I see that he also inspired your “Enemy of the people”...

I have to say that I often play with others’ titles such as my “War in times of love” which reversed Gabriel Garcia Marquez’s “Love in the time of cholera” or “Fiftyfive shades of gay” which comes from “Fifty shades of grey” and so on. Both Ibsen and Brecht are great political authors that I adore. They are very close to my understanding of how theatre should be.

Last September, in Milan, you showed “A play with four actors and some pigs”. The topic seems to be, once again, the European dream. How popular is this dream in Kosovo today?

In this play, the European dream turns into a ‘national’ dream rather than a personal one. And the play is about Europe putting a list of rules and regulations to prevent small nations to achieve their dream. People in Kosovo still dream about Europe because they don’t see any other alternatives. Indeed, the alternatives to the EU would be either Turkey or Russia: definitely bad options! Of course, people do not believe that all problems will be solved by joining the EU, but this idea makes people feel safe.

Is the situation with Serbia still tense?

The situation with Serbia is more stable now, but the state has spent too much energy on this battle. Both Serbia and Kosovo should focus on employment policies, on the economy, on fighting corruption: real problems. Instead, they are hostages to each other. There is a joke that I will try to translate: “A young boy calls his father and says: I’ve caught the thief. And the father says: Hold him. So the young boy: I can’t. He is not letting me go”.

Can I ask you to comment on the recent veto by France to further EU enlargement?

I usually do not comment on political issues because I am an artist, but definitely what happened would not bring a positive message to people in Northern Macedonia, in Albania and of course in Kosovo. Europe has not kept its promise. People could lose hope and trust, and this could lead some politicians to work on a ‘Pan-Albanian’ Union. At the same time, I think that we should not rely totally on Europe. The easiest way to survive would be to make people feel fine in their country by fixing internal problems.

When you were dismissed as director of the National Theatre in Kosovo, did you think of leaving the country?

Not really, because I enjoy being there. It is a fascinating period for a writer to live in a place like Kosovo. The work you do has a meaning. You are actually shaping the identity of this young country, and helping to make it more tolerant by putting on stage shows like “Fiftyfive Shades of Gay”.

Your “Qendra Multimedia” is known as “the only independent theatre company” in Kosovo. Who are you?

We founded Qendra in 2002, but then we used to produce mostly plays for children. In 2011, we sat and thought: “What are we going to do? Are we going to produce the same shit as the National Theatre? Will we try to imitate the big European productions with no money and no technology? No, let’s focus on stories”. Since we tackle taboos or sensitive topics, there are often police out of the theatres in Kosovo or in Serbia where we stage. Homophobes, nationalists, and fascists, of course, hate us. Sometimes they call us “traitors”, but it’s part of the game. Some government officials very often hate us because they think we do not bring a good image of Kosovo abroad, but it means that what we do matters. We do not work in a comfort zone, but that’s exactly where theatre should be.

Tell me something about the theatre festival Showcase that took place in Prishtina from October 31 to November 3: what is it about?

It is hard for Kosovar artists to show their work to international producers. Not everybody is willing to visit Kosovo because they believe that it is still a dangerous country. So last year, in 2018, we decided to arrange an event called “Showcase” to bring journalists and producers to Prishtina. It worked well. For example, we managed to take “Peer Gynt” to Lyon because some representatives of “Sens Interdits” were there last year. This year it has turned into a national event. We try to fight the isolation of the country by enabling Kosovar artists to meet and dialogue with their international counterparts.

Is theatre popular in Kosovo?

I am quite optimistic because in the last couple of years something has changed. Kosovar directors or regional directors who work in Kosovo have started to produce good political works. 95% of the theatre audience is under 35 because the ticket is only 1 Euro for them. And young people want to see this kind of political plays on stage.