The Fenice theatre goes to Andrićgrad 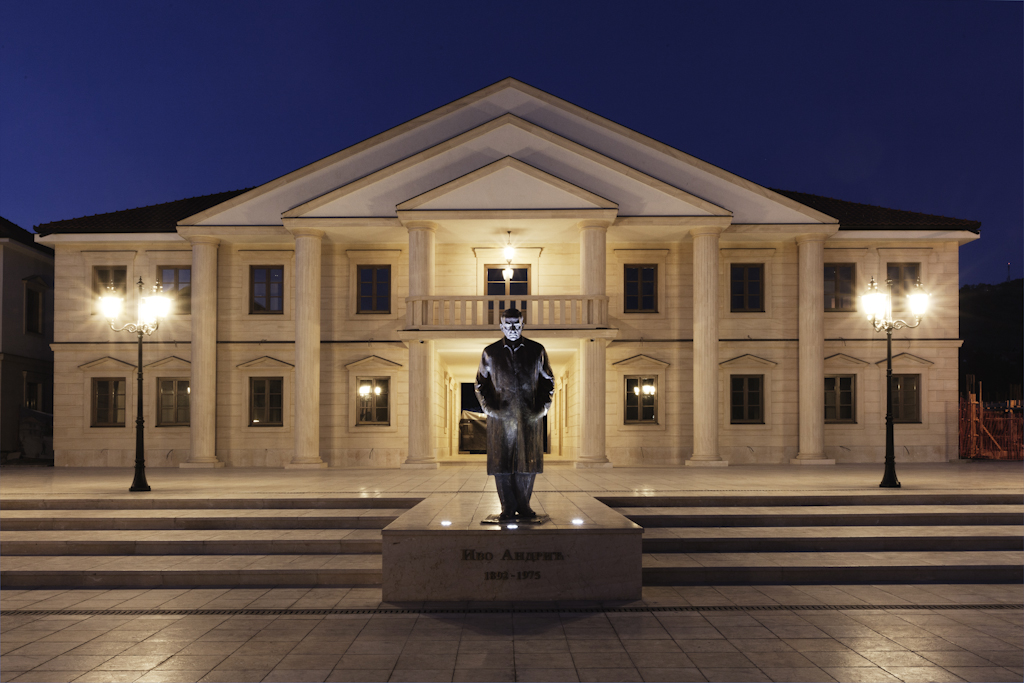 The prestigious Venetian theatre has begun working with Emir Kusturica on the production of a theatrical version of Ivo Andrić's novel The Bridge on the Drina. The project is strongly contested by the associations of the victims in Višegrad, where the opera is due to go on stage June 28 2014

It is not easy to navigate the complex Balkan scene, as the superintendent of the Venetian theatre La Fenice, Cristiano Chariot, is realising. Three weeks ago, he visited Banja Luka with the Republika Srpska President, Milorad Dodik, and the film director from Sarajevo, a “naturalised” Serbian, Emir Kusturica.

The famous Venetian theatre has begun collaborating with Kusturica to produce two operas by 2014: a new version of Otello and, above all, the first adaptation of the most famous novel by Ivo Andrić, the Yugoslavian winner of the Nobel prize for literature in 1961. Following Monica Bellucci, it looks like another piece of Italy has decided to tie its image to that of the Serbian part of Bosnia Herzegovina.

This collaboration might elicit surprise, but there are reasons. This is not an easy time for Italian theatre which is having to contend with the economic crisis and cuts in contributions from the public purse. Even the most able superintendents, like Chiarot, need to resort to some expedient to balance their books. A partnership with Kusturica, the world famous film director, must have seemed like an ideal solution.

On March 26th, Chiarot visited Banja Luka to sign for the project, with which he declared himself duly satisfied. “We are very happy to have this chance to work together,” he stated during a press conference organised alongside the meeting with the President of the Serbian entity, Milorad Dodik. “We will be able to offer our audiences a new type of performance in our theatre.”

Venice will provide materials, logistics and performers. But the opera, and above all the music and libretto, will be under Kusturica's command.

Kusturica radiantly outlined how this tandem could definitively mark a “cultural renaissance” in Republika Srpska. The Fenice's offer arrives at an opportune moment for the director, when the political decline of his patron, Milorad Dodik, looked likely to result in projects begun in recent years being abandoned, above all the construction of Andrićgrad, the theme town also inspired by Andrić's work, built – not uncontested – at Višegrad, its total cost estimated at between ten and twelve million euro.

Chiarot, already in the near future, could however regret the tie up with Kusturica. The popularity of the director remains unquestionable, but it is a double-edged sword, he being a controversial figure, at least east of Trieste. In fact, from the times of the filming of the award-winning Underground, Kusturica has hit the news for his increasingly pro-Serbian position and for what many consider a revisionist stand on the Balkan wars of the 90s.

In recent years, this side of Kusturica has become overbearing, together with his growing political involvement. On that same 26th March, the day on which he put his signature to the agreement with the Italian theatre, Kusturica received the nomination for membership of the Council to the Serbian Crown from Prince Alexander II of Karađorđević. Just some days later, Kusturica expressed his intention to make a film about the issue of trafficking in organs in Kosovo, a proposal which earned him much criticism and an angry reaction from Prishtina public opinion, which reached the point of asking that the film director be declared “persona non grata” within its borders.

The film director seems to want in some way to acquire the cultural inheritance of Ivo Andrić, an attempt predictably criticised by the media of the area, as in the Croatian newspapers (“Kusturica has kidnapped Ivo Andrić” a headline some months ago in Jutarnji List ), and even Serbian ones like Politika which did not moderate its language in defining the Andrićgrad project “the unfortunate encounter between a limited imagination and poor knowledge of the past”.

As regards the theatrical version of the Yugoslavian writer's work, one has the impression that Kusturica is trying to use to his own advantage the good faith and substantial ignorance harboured abroad (in this case in Italy) on the subject of the history of the Western Balkans and in particular of Bosnia Herzegovina. Suffice it to note the date “suggested” by Kusturica for the opening night of the opera, to take place precisely in Andrićgrad (Višegrad) on June 28th 2014. A date like any other probably in the eyes of a group of Italian impresarios. A fundamental date, however, for the Serbian people both from the religious point of view (Vidovdan, St. Vitus Day) and from the historical one (the defeat on the blackbirds' field in Kosovo in 1389), and full of symbolic significance for the nationalists.

The petition. Embarrassment for the Fenice

The news of the Venetian theatre's involvement with Kusturica's project has been taken up by Bosnian newspapers and unleashed understandable indignation in the Federation of Bosnia Herzegovina (FbiH).

“The Fenice should refuse to collaborate with Kusturica,” OBC was told by Hikmet Karčić, from the association Udruženje Čuprija (The Bridge) which has been fighting for years in defence of those who were subjected to ethnic cleansing in Višegrad during the war in the 90s. “The Fenice is a prestigious theatre, world famous. It should not support projects like this, in a town where women and children were burned alive in their homes, dozens of girls were raped and hundreds of men were slaughtered and thrown into the river. Even today the authorities still refuse to admit what happened in the town. On the contrary, they are using Ivo Andrić's book – which in any case is fiction, even if it refers to historical events – to justify what the Serbian fascists did here in the nineties. Kusturica's project,” concludes Karčić, “ is one supported by the authorities of the Republika Srpska which aims at falsifying the historical memory in order to prevent reconciliation.”

The Udruženje Čuprija has launched a petition to ask the Fenice to withdraw its backing. “ We estimate about ten thousand emails have reached the Fenice,” say the organizers. “We decided to do this because we don't think the directors of the theatre are aware of the dreadful impression they are giving of themselves in Bosnia Herzegovina, with this collaboration.”

All things considered, it looks as though this slip of Chiarot's is an unwanted and unexpected gaffe. For the moment the theatre has not reacted to the criticism coming from Bosnia Herzegovina, closing itself in total silence. The emails have not been answered, the website of the Fenice gives no news on the trip to Banja Luka, and the name of Kusturica appears nowhere.