Nadezhda Azhgikhina: “Let’s remember that journalism is a public good" 08/03/2022 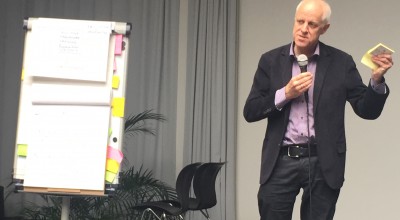 Killings, imprisonments and other methods to silence journalists happens all too often, in Europe as elsewhere in the world. In this editorial, the importance of being on the side of those who are threatened

Macedonia, October 2014, in the suburban area of the capital Skopje a bit of a drive from the centre, over several small roads, in a small house with a little veranda out front, a family is trying to make a living. It is hard, because the father, an investigative journalist, Tomislav Kežarovski, must stay in the house 24/7, behind the veranda. He is, at that time, under house arrest.

Kežarovski is a highly respected journalist in Macedonia. He has been active in reporting corruption cases and political issues. It is obvious that his investigative reporting was the de facto reason for his arrest in May 2013. It was early morning in spring 2013, when the police force raided his home and arrested him. He was detained without trial and put in an 8 square meter cell together with five other prisoners before the court hearing in October 2013, when he was given a 4½-year sentence. The “crime” he committed, according to the authorities, was revealing the identity of a protected witness in a criminal prosecution case he published in an article in 2008 for the newspaper Reporter 92.

The witness, however, had not yet been given protection at the time the article was written, and in 2013 admitted having given a false statement under pressure from the police. Kežarovski has done investigative reporting of great value, apparently so great that the authorities have to silence him with threats of imprisonment.

The outrageous verdict of 4½ years of imprisonment has led to many protests and eventually the court reduced the sentence to house arrest after Kežarovski had served the first year of his sentence. I met him at his home, where he showed me the scars from the police raid during the arrest. It was not only the physical scars that Kezarovski had to endure; the ordeal his wife and daughter had gone through will remain a mental wound for them.

The European Federation of Journalists (EFJ) and a coalition of civil society organizations as well as governmental institutions have been outspoken about Kežarovski’s case. The outcry by these organizations against the treatment of Kežarovski had caused the Appeal Court to reduce his prison sentence to 2½ years. A few weeks later, he was released for medical reasons. Now he is free and outspoken about his country.

At the 2015 EFJ Annual Meeting in Budva (Montenegro), he held a very touching speech: “I was tried at first at the Criminal Court, then at the Court of Appeal in Macedonia, a country where you will be put behind bars because of what you write as a journalist. This was not just a punishment given by the court to me. It was a punishment for the entire journalism community, our freedom and democracy as a country,” said Kežarovski.

Tomislav’s experience is just one of hundreds that journalists throughout the world have to face. This is especially true in countries where the lack of democracy gives authorities a free hand to punish journalists and media workers with threats and imprisonment. However, they carry on doing their jobs because it is their duties as journalists.

The threats against journalists are obvious. In 2014 and 2015, over 100 journalists and media workers paid the highest price for press freedom – they were killed for doing their jobs. Journalists become the target for those who want to silence their critical voices. International governmental institutions such as UNESCO, OSCE and the Council of Europe have strongly condemned these killings.

Both governmental and non-governmental organizations such as the European and International Federations of Journalists, the Committee to Protect Journalists, Article 19, Index on Censorship and Reporters Without Borders are extremely concerned about the impunity of crimes against journalists. According to a UNESCO report, over the past decade only 7 per cent of the perpetrators who killed journalists have been brought to justice. Impunity for these types of crimes is still a major problem for press freedom organizations.

It is not only about the killings. There are many ways to silence journalists, such as through threats or imprisonment. A number of countries that are leading in this regard have developed a very sophisticated method of silencing media workers and journalists, in particular investigative journalists. Imprisonment of journalists for their legitimate work fosters a culture of self-censorship, as emphasized by UNESCO in the World Trends in Freedom of Expression and Media Development .

While it is easy to condemn killings of journalists, inter-governmental organizations are often hesitant to comment on decisions to jail journalists. The justification often involves the followings: 1. Similar criminal laws are used to persecute journalists whether it is a democratic or dictatorship country. 2. It is a normal procedure not to exert influence on the internal matters of other nations, as it is concerning member states. 3. No authority will admit that they directly put someone in jail based on his/her journalistic activity. The authorities would rather accuse journalists of conducting propagandist activities on behalf of terrorist or criminal organizations, or claim that the journalist is a member (sometimes a leading member) of an illegal organization. In Turkey, journalists may even been prosecuted for engaging in propaganda on behalf of an illegal or terrorist organization without being a member of this organization. Governments using the criminal laws to prosecute journalists are well aware of the loopholes.

However, we have recently seen an active approach on the part of the OSCE, the European Commission and the Council of Europe, which use new online platforms for monitoring media freedom violations. This is a welcomed development. The Mapping Media Freedom project developed by Index on Censorship is also a new innovative way to track, in real time, all media violations occurring on the European continent.

The Macedonian case shows how important it is for international organizations to be firm and consistent in their approach when helping imprisoned journalists. New tools were needed, such as the new platform for the protection and safety of journalists set up by the Council of Europe, to inform the authorities in member states about alarming violations on journalists and their organizations. Grass-roots organizations like NGOs have a duty and responsibility to alert the relevant authorities when violations occur. The Council of Europe has committed itself to following up on all cases and to demand that governments provide explanations.

In 2012, in Turkey there were more than 100 journalists behind bars. As a response, EFJ-IFJ launched a project entitled “Set Journalism Free in Turkey ” that encouraged media and unions throughout Europe to adopt a journalist in prison: by following the cases, unions and media around Europe were encouraged to physically attend the court cases of the prosecuted journalists. The project had a major impact on the imprisoned journalists, their families, friends and colleagues by providing them support and exposure that increased international awareness.

One of the prisoners, Füsun Erdogan, was put in jail without proper judicial proceedings. After serving more than seven years in pre-trial detention, she was given a life sentence. As a dual national, the Dutch-Turkish journalist, Füsun Erdogan was able to receive help from the Dutch and other European journalists' unions. The unions provided advisers and lawyers to help secure Füsun’s release. Together with the EFJ and international pressure, Füsun was finally released and relocated to the Netherlands. This happened to a greater number of prisoners thanks to many donor countries and to a number of very dedicated journalists following the cases.

Just about when the project was achieving one of its main objective by reducing the number of journalists in jail (from over 100 to around 30 in 2 years), Turkey faced a failed coup attempt on 15th July 2016. Hopefully unsuccessful, the violent military attempt to takeover targeted heavily the media beside civilians and democratic institutions of the country such as the Turkish parliament. What has followed in Turkey after the failed coup (permanent state of emergency, witch hunt in all private and public sector of the country) looks very much like a successful coup against all dissenting and opposition voices in Turkey. The number of jailed journalists rose immediately back to more than 100 with many media being banned or under attack.

It is difficult to imagine that a country in Europe is imprisoning more than 100 journalists for doing their jobs, but this is the situation. Even worse, negotiations between the EU and Turkey on the refugees crisis seem to be taking place while ignoring the situation for journalists in Turkey and the serious lack of media freedom there. Besides attacking local journalists, Turkish authorities have also turned their attention to foreign journalists and are preventing them from doing their job. Moreover, the situation is getting worse because local NGOs do not dare to speak out and ask for international attention.

Regarding some matters, the digital era has an impact on imprisonment of journalists. A range of approaches should be adopted to help free journalists from prisons. These include actions such as building a global network to ensure that we continuously pay attention to all jailed journalists, without losing our patience or focus at any time. Many organizations issue a list of murdered journalists, but we need an effort in mapping the imprisoned journalists as every year, to have a global picture and to maintain the pressure on the authorities in question.

What I would also urge is the development of projects like “Set Journalism free in Turkey” on a worldwide scale, urging governments to maximize their efforts to release jailed journalists and to bring up the cases wherever it is possible and carrying out fact-finding missions to targeted countries and follow the cases up with concrete actions.

Serious media freedom violations like killing, detention or impunity cases must be top priorities for assuring the protection of fundamental rights and public access to information. Every time a journalist is in jail, the public's right to access information is also in detention. There can be no press freedom in Europe as long as a single journalist is in captivity.

*Mogens Blicher Bjerregård is the President of the European Federation of Journalists (EFJ) since May 2013. He is a Member of the Council and Bureau of The International Programme for the Development of Communication (IPDC) of the UNESCO since 2014 and Vice-president of the International Media Support (IMS). He has been President of the Danish Union of Journalists (DJ) from 1999 - 2015. Blicher Bjerregård successfully led the DJ to a strong union with yearly growth in its membership.