Clueless and ranting: the press according to Edi Rama 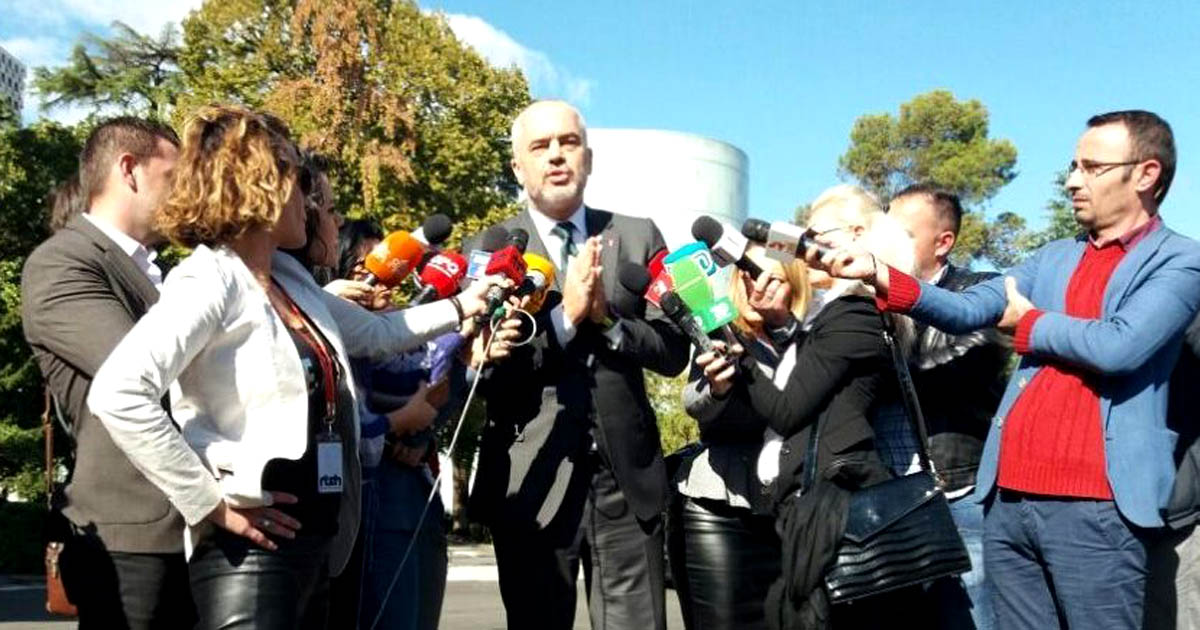 With the eyes of the public still on the judicial troubles of the former Interior Minister Tahiri, Prime Minister Rama is back to attacking the press, confirming the ambiguous relationship between Albanian media and politics

With only the votes of the Socialist majority, the Albanian Parliament rejected the Public Prosecutor's request to arrest the former Interior Minister Saimir Tahiri, currently investigated for corruption and drug trafficking between Italy and Albania following recently revealed wiretappings by Italian authorities. Transcending their own competence in assessing the evidence and arguments of the Public Prosecutor and labelling detention as an "extreme" measure for an MP of the Republic of Albania, the Socialists created a dangerous precedent of the Parliament obstructing a "politically motivated" judiciary.

At the end of an inevitably controversial session, Edi Rama met the reporters waiting for him outside the Parliament with verbal attacks rather than answers.

"I'm here for you, just for you. To tell you to think, to study, and to understand", began Rama even before hearing the questions from journalists. "First of all, be ashamed, you and all those like you, who don't get it. You, that keep confusing the audience with meaningless questions, you don't get that this is all too clear for anyone who wants to read five lines", he said without ever answering the questions – that he did not hesitate to define "idiotic" and "inappropriate" – on the Tahiri case.

In a tirade of over ten minutes , feeling accused of leading a majority that stands up for organised crime, Edi Rama identified the press that "spouts accusations without understanding, without any sense of responsibility", as one of the causes of the country's many problems, raging against journalists, analysts, and publishers alike. "You are so ignorant. You talk nonsense! You are disgusting! You're just a gossip amplifier", "Your questions come from ignorance", "You don't read and listen to understand what we're talking about", "Before making such an inappropriate question, read and study", he said before being interrupted by the journalists who thanked him, lowered the microphones, and left.

Immediately after Rama's statements, a wave of indignation and solidarity reached the press. The Association of Albanian Professional Journalists expressed "deep concern for the insults and intimidations by the Prime Minister against the media", appealing to the public and the institutions to help stem Rama's many attacks. The European Federation of Journalists (EFJ) followed suit by stating that "all journalists have the right to ask questions that politicians may like or not, without being intimidated and attacked in their investigative work".

Associations and opinionists have also invited to boycott Rama's activities, even for only one day.

However, these appeals are likely to contribute to effectively reducing journalists to simple amplifiers of statements or gossip from the rooms of power. A long-term boycott of press conferences might be more effective to regain the indispensable space for deepening, reflection, elaboration, and commentary on contents and current affairs. A forced break that separates what politics says from the facts might help figure out the political action necessary to move beyond the quarrell and gossip dynamics that often characterise the Albanian media landscape.

Not placated, Rama resumed the topic in the following days by responding to protests on social media – a must of his car transfers – arguing that he did not offend anyone as he only expressed an opinion, and that, anyway, this hornets' nest disgusted him.

Despite the understandable protest and solidarity messages, Rama's views may not differ so much from the public's, bearing in mind the responsibilities of the Albanian media over the last decades of press freedom.

In fact, the Albanian media scene is not new to newsrooms without journalists, articles without news, sensationalism and scaremongering, fake news, a general lack of fact checking, editorials without reflection, investigations without evidence, countless evening talk shows commenting on the morning's statements, and newspapers transcribing the TV debates of the night before.

However, what most damaged the credibility of the press over the years was its proximity to politics, switching between right and left at each shift in power – if it makes sense to use terms that have little to do with the political realities that only by convention they are called to represent. Not all the press is dependent on power, of course, but unfortunately a good part is, and that ended up fuelling the mistrust and disaffection that leads the public to choose gossip and "life style" articles over information.

Yet, if information becomes mere entertainment, the risk is that, over time, the public will give up on searching for truth, ending up siding with the Prime Minister – who blames a system that he himself contributed to creating and maintaining for years – and dancing to the tune of politics, which discredits the press in order to strengthen itself.

The reporters at the improvised press conference in front of the Parliament, and those watching from the studios where they host politicians and fellow opinionists, may find shelter in protest and boycott, or join colleagues who have chosen to distinguish the truths of Rama's statements from his inappropriate disgust. Either way, of course, they will not be supported by the owners of their media groups, always close to the power lobbies.

Whether Rama made such a show of himself to divert attention from his vote in defense of Saimir Tahiri or just had one of his frequent outbursts of nervousness, he did give to the centre-right opposition led by Lulzim Basha another opportunity to ramble on press freedom in the country. Nevermind the fact that, when the current opposition was in power, it used to distribute privileges and funding to the "friendly" press and fines and aggressions – not just verbal, but also physical – to critical voices.

This is not the first time that Rama's proverbial intolerance of inconvenient questions has fuelled debate and clashes in Albanian TV studios. Authoritarian and sassy at home, Rama has been seen asking Top Channel's historic face Sokol Balla if he was drunk, tell Blendi Fevziu of Klan Tv that his empty head was a problem for everyone, and invite ABC News correspondent Erisa Zika to take English classes before attending a press conference in Brussels.

The media in the Albanian transition

For a better understanding of the difficult evolution of the Albanian media system after Communism, we recommend this report by the Friedrich Ebert Stiftung and the many resources on Albania catalogued by our Resource Centre.

Some female journalists have received their share of gender stereotyping and double entendre as well as the usual paternalism. Rama told Ilva Tare – Ora News's top journalist – that he understands her poor work, as she has a son to take care of. When Eni Vasili of News 24 urged him for an answer, he told her that he was there to satisfy every need of hers. Many still recall the Shijak Tv reporter who, after an inconvenient question about bribery in the Tirana municipality, was blessed with the definition of "prostitute of information".

The tune changes when the Prime Minister is abroad. In an interview with Deutsche Welle , even when Tim Sebastian repeatedly insisted on the same question, when he re-read statements exposing veiled messages, when he smirked at the poorly concealed intention of provoking Serbia and pressure the European Union with a single sentence, Rama never lost patience and, at the end of 30 very long minutes, he thanked the journalist, smiled, and said it was an honor.

In an interview with the BBC , when Sara Montague reminded him that Albania is the poorest and most corrupt country in Europe, that his government partner represented, in his own words, everything that was rotten in the country, and that the promises of the campaign could not be maintained, he answered promptly and even said he appreciated her insistence.

While Edi Rama's personality switches between home and abroad are nothing new, there are no "idiotic" questions or "unprepared" and "raving" journalists that can justify them.

After Rama's show in front of the Parliament, many journalists have admitted that they have failed to fulfill their role of trustworthy interpreters of reality and faithful mediators between politics and the public. On the other hand, no politician seems willing to do the same. As usual, all smoke and no fire on that front.