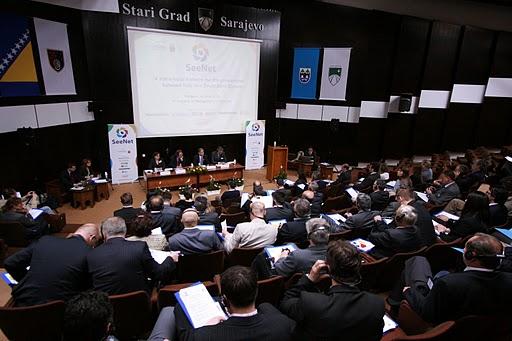 Italian regions, south-eastern European local authorities, and Italian civil society organisations will combine their experiences in a three-year programme. SeeNet II – South-East Europe Network is the widest partnership of decentralised cooperation between Italy and the Balkans

“The activities of this extensive programme will enable us to pursue co-development by putting to use the energies of all partners.” With these words, Enzo Brogi, councillor for the Tuscany region, opened in Sarajevo on 4 June the first meeting of the managing committee for the SeeNet II programme. Around 100 people met as representatives of the local authorities involved in the widest, decentralised, currently active cooperation partnership; they approved the planning for the first year and made nominations for the partnership's governing organs.

Enzo Brogi, councillor of the Tuscany region, during the meeting in Sarajevo

SeeNet II (South East Europe Network) is a network of Italian regions, south-eastern European local authorities, and Italian civil society organisations joined in a three-year programme of decentralised cooperation to strengthen governance and local development capacity in the western Balkans. The programme builds decentralised cooperative relationships that can share experiences from the last decade across the Adriatic; specific actions will support the area’s integration into the EU. Following the first Seenet programme that ended in 2006, the new programme, SeeNet II, joins over 60 partners in a trans-local network for cooperation between Italy and south-east Europe. Tuscany leads the programme, co-financed by the Italian Ministry of Foreign Affairs and by seven Italian regions (Tuscany, Emilia Romagna, Friuli Venezia Giulia, Marche, Piedmont, Veneto, and the Autonomous Province of Trento). The activities include 47 local authorities from seven south-eastern European countries (Albania, Bosnia and Herzegovina, Croatia, Kosovo, Macedonia, Montenegro, and Serbia) and the Italian organisations of UCODEP, ANCI, ERVET, INFORMEST, ALDA, CeSPI, and Osservatorio Balcani Caucaso.

The cooperation between Italy and south-eastern Europe has its roots in the early post-war period, as highlighted by Italian ambassador Raimondo De Cardona: “The start of this programme testifies to the joint efforts made after the conflicts of the nineties.” De Cardona added that these efforts became visible in the first conference of Ministers of Foreign Affairs, held in Sarajevo on 2 June, that reaffirmed the will to re-launch the EU integration process for the Western Balkans. Zlatan Mesić, the councillor for finance and accounting in the Sarajevo-Stari Grad municipality, warmly praised the programme in his welcome address: “I hope that the SeeNet network will strengthen economic relationships between Italy and Bosnia and Herzegovina and help our country develop a better capacity to present project proposals for IPA funds.”

The programme’s budget is 11,040,000 euros, the Italian Ministry for Foreign Affairs will provide 75% (over eight million euros) and the involved regions and autonomous provinces will provide the remaining 25%. Emanuela Benini, representative of the Central Technical Unit of the general directorate for development cooperation, stressed the importance of both the funding and diversity of partners: “The SeeNet programme is the most significant project in Italy’s decentralised cooperation, characterised by a complex network that will allow all participants to gain new competencies and knowledge as well as in-depth insights into the crucial meaning of partnerships.” Indeed, the programme envisages a management system guaranteeing the constant political and technical involvement of partners. At the end of the second session, Flavia Donati of the Tuscany regional government’s international activities office summarised the programme’s characteristics as: “clearly defined roles, quality partnership and networking”. According to Donati, the strong partnership may well develop beyond the three years of the programme.

The EU’s support for decentralised cooperation was reaffirmed by Lara Scarpitta, of the EU delegation in Bosnia and Herzegovina: “By asking local governments to implement European policies, the EU supports decentralisation in the enlargement process.” Scarpitta noted that the Lisbon Treaty envisages the strengthening of democratic participation and offers local governments greater competencies according to the subsidiarity principle.

Two more sessions were devoted to nominating people to the partnership's governing organs and presenting and approving guidelines for implementing the programme's actions according to principles of lasting political commitment, reciprocity, innovation, and multi-level promotion of decentralisation.

Over three years, nine projects will be implemented that include building up cultural heritage and tourism, supporting the small and medium business sector, developing rural areas, strengthening social policies and improving local planning. The nine projects, jointly developed by partners with direct impact on south-eastern European territories, are framed into four transversal actions: institution-building (to strengthen the local authorities’ capacity to plan and develop EU-funded projects), information and knowledge-spreading (to provide news and analyses on south-east Europe and the programme's priority themes), policy-oriented research on local governance in the Balkans and networking between south-eastern European local governments (to strengthen the role of municipal associations in the enlargement process).

According to Oriano Otocan, the Istria region’s councillor responsible for international cooperation and European integration, this ambitious network may consolidate and even develop in the future by combining its experience with other important initiatives in the Adriatic Euro-region. The next three years involve work and challenges for building a new, enlarged EU and for an immediate start for the “European future of the Western Balkans”, reaffirmed in the summit of 2 June.