Antonio Megalizzi, in love with Europe 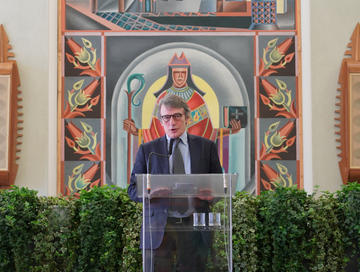 The Antonio Megalizzi Foundation was inaugurated in Trento on February 13th-14th. The ceremony was attended by President of the European Parliament David Sassoli, who outlined the challenges faced by the Union, the community in which Antonio strongly believed

The Ode to Joy, from Ludwig van Beethoven's Ninth symphony and the official anthem of the European Union since 1985, resounded on Friday, February 14th in Trento for Antonio Megalizzi, a young man killed in the Strasbourg terrorist attack of December 2018. Emotion in the hall further rose when the audience, standing and with their eyes closed, listened to the recording of an excerpt from Antonio's story "The steel sky ", read by the colleagues who for years talked with him about Europe through the Europhonica radio network.

The inaugural ceremony of the Foundation dedicated to Antonio Megalizzi opened in the Depero hall of the palace of the Province of Trento, crowded with citizens and top authorities, including the President of the European Parliament David Sassoli. The event was also broadcast live on Rainews.it and on the website of TGR Rai of Trento. Great emotion and deep participation characterised the morning, with several speakers coordinated by the head of the press office of the Autonomous Province of Trento, Gianpaolo Pedrotti. 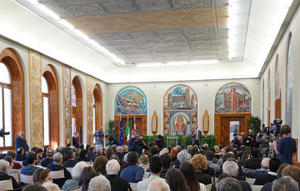 "After Antonio's funeral, we asked ourselves how to carry on his memory, obviously leaving the task of deciding shapes and ways to the family", said the president of the Province of Trento, Maurizio Fugatti. "The idea of ​​the Foundation was born from this completely spontaneous civil impetus. First of all with projects aimed at young people, in schools and universities, to discuss and debate, respecting pluralism, and to provide them with tools to develop a critical spirit and understanding of the profound changes taking place in society". He then concluded: "Trentino has always believed in the reasons that led to the birth of the European Union, a new community of peoples in which differences can coexist in unity. We still believe in this intuition and, as Antonio himself thought, we choose to commit ourselves to a more united, more supportive, fairer, stronger Europe, capable of facing the many social challenges, that does not withdraw in the face of its responsibilities and does not succumb to hatred and fear".

The first was the mayor of Trento, Alessandro Andreatta. He brought greetings from the valley communities and the municipalities of the Province and thanked Megalizzi's family for deciding to transform this painful memory into the engine of concrete projects in line with Antonio's character and dreams: “A young European man who believed in the importance of communication, which in its various forms can break down barriers, in space and time. The Foundation can continue to demolish them and transform them into bridges". An initiative, Andreatta recalled, made possible also by the support of the Trade Union of Journalists of Trentino Alto Adige, the Italian National Press Federation, the University of Trento, Usigrai, Rai, and the Province of Trento, "determined to collect Antonio's legacy to invest in the future, as he would certainly have continued to do”.

On Thursday, February 13th, also in Trento, the book edited by journalist and editor of Article 21 Paolo Borrometi was presented, in which he collected writings by Antonio Megalizzi and memories of Antonio's family, girlfriend, and friends. The proceeds from the sale of the book "Antonio's dream. History of a European young man" (Ed. Solferino , 2019, pp. 186) will be entirely donated to the Antonio Megalizzi Foundation.

Antonio Tajani, in charge of the Presidency of the European Parliament on the day of the attack, then shared his personal memory: “that evening, when we received the news of the shooting in the streets of Strasbourg, we did not know if people had been injured or dead. ... but I decided to continue the work of the EP, because in the face of violence we must react with force. A year and a few months after that fact, we must ask ourselves: Who won? The executioner or the victim? The terrorist or the journalist? Looking at what was born here, in Trento, we must say that the victim has won because his ideas and his dream have not been cancelled".

According to rector of the University of Trento Paolo Collini, desire for knowledge was deep seated in Antonio, who was enrolled in the master's degree course in European Studies: “He wanted to study because he wanted to learn, to become a deep connoisseur of Europe – of its institutions, rules, and history". He recalled Antonio's way of being a journalist, which was based on the motto 'to be informed and to inform', as well as his battle against inaccurate news, not based on facts, not rooted in serious analysis. A European, even before being a Europeanist, concluded Collini: "Antonio was and is the representative of a generation of young people who are deeply European, indeed, 'European natives'. They consider it natural to move freely to another country of the Union, where they can build their lives and find satisfaction in their professional and personal path, without any limit".

And it is through the radio, as told later by Amanda Luisa Guida, editorial manager of Europhonica - RadUni , that such will continue: “We are an association of students from 30 European universities, volunteers who have set themselves the goal of training and informing on European issues. Antonio and our French colleague killed that day, Bartosz Orent-Niedzielski called Bartek, were part of it. Antonio loved the radio, it was his second home. He was a friend, before being a colleague, and for this reason in the aftermath of that attack we asked ourselves how to honour his memory". They understood, continues Guida, that the only way to give him voice was to go back to the microphone: "to make our projects even more concrete, to keep alive that sense of family that unites us from north to south, and to tell Europe in a simple but never banal way, just like Antonio did".

Education and information are the pillars of RadUni, shared by the Megalizzi Foundation, chaired by Antonio's partner Luana Moresco, who can count on its full future collaboration. Willingness expressed also by Alberto Matassino, general manager of Rai, who reminded the public of Rai's participation in the initiative “Let's not stop this voice ” on the first anniversary of Antonio's death, which broadcast on Radio Rai3 and on RadUni the recording of his interviews and writings. 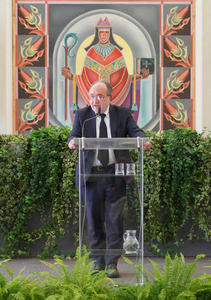 "All activities and projects", strongly emphasised FNSI president Giuseppe Giulietti, "must be decided by the Megalizzi family. Our task will be to remain a step back, to support their proposals gracefully and respectfully, and to advance not us, but Antonio's dreams”. This day, added Giulietti, should be considered not one of commemoration, but of action: “To interpret the desire for knowledge and curiosity, which unfortunately has taken the lives of other Italian young people such as Giulio Regeni, Ilaria Alpi, and Valeria Solesin, together with people who have been missing for too long and that we want to see come back: Silvia Romano and father Paolo Dall'Olio. But also those like Bologna student Patrick George Zaky, recently arrested in Egypt for criticising his country". Because being citizens and being journalists means empathising and supporting those who we do not know and who were deprived of their freedom of opinion.

Antonio Megalizzi, continued the FNSI president, also felt profound annoyance with fake news, demonstrated by the care with which he used words in information, proven by facts, unlike some journalists who tend not to describe the real issues, but to trigger alarmism, statements without numbers or data. Starting from this observation, Giulietti launched the first proposal to the Foundation: "to collect Antonio's writings dedicated not only to Europe, but to news falsification processes. To bring them to the European Parliament and ask for a reflection on fake news and hate speech to start there".

And it was precisely the President of the European Parliament, David Sassoli, who closed the morning, starting from Antonio as "narrator": "what would this European space be today if the European Union were not there? This is the question that Antonio asked himself and which at the same time is a political message of great importance". How could individual countries – Sassoli wondered – live in a profoundly changed global world that is struggling to find its own rules, without the Union?

"And this is the question", stressed David Sassoli, "which stemmed Antonio's passion in seeking to tell Europe to young people, through correct information and demonstrating how useful it can be for people's lives". And Antonio, reiterates the President of the EP, would have found it very interesting to deal with the season we are experiencing: "this was Antonio's job: looking for a narrative to make sense of this vocation of Europe. And I think he would have had a lot of fun today, because the debate in Europe has grown a lot. For example, in the last elections young people went to vote, while it was said that perhaps Europe would be further divided or would come to an end: in 2014 the voters between 16 and 24 were 28%, this time it was 48 %. In these numbers we find the work done by Antonio: talking to young people, explaining, making them curious, looking for the right questions and giving useful answers".

The final conclusions were given by David Sassoli on the great challenges that lie ahead: "what Europe do we want tomorrow, what role for our countries, what additional powers do we need to make the Union work better? We face many challenges and I cannot but mention two important initiatives which are currently animating the European debate. On the one hand, the definition of what Europe will be for the next seven years, that is, the discussion on the budget. The second – continued Sassoli – is to understand what new mechanisms the Union needs to function better, starting from the idea of ​​creating a conference on its future, involving public opinion, universities, citizens' networks, associations, the world of labour, and national parliaments and setting up a path for a couple of years”. And along this path, he stressed, the Foundation born in Trento can be a point of reference for Italian civil society.

"We are at the beginning of a very important term and we must create much more discussion possibilities than in the past. We need our countries, their gaze, their passion, but we must ensure that healthy patriotism does not overlap with a nationalism that Europe has already known. Healthy patriotism, with stronger European sovereignty, in a world that must find an example of fundamental values ​​in the Union. Antonio believed in this. And of course we miss Antonio Megalizzi", said the President of the European Parliament.

On Thursday, February 13th, also in Trento, the book edited by journalist and editor of Article 21 Paolo Borrometi was presented, in which he collected writings by Antonio Megalizzi and memories of Antonio's family, girlfriend, and friends. The proceeds from the sale of the book "Antonio's dream. History of a European young man" (Ed. Solferino , 2019, pp. 186) will be entirely donated to the Antonio Megalizzi Foundation.