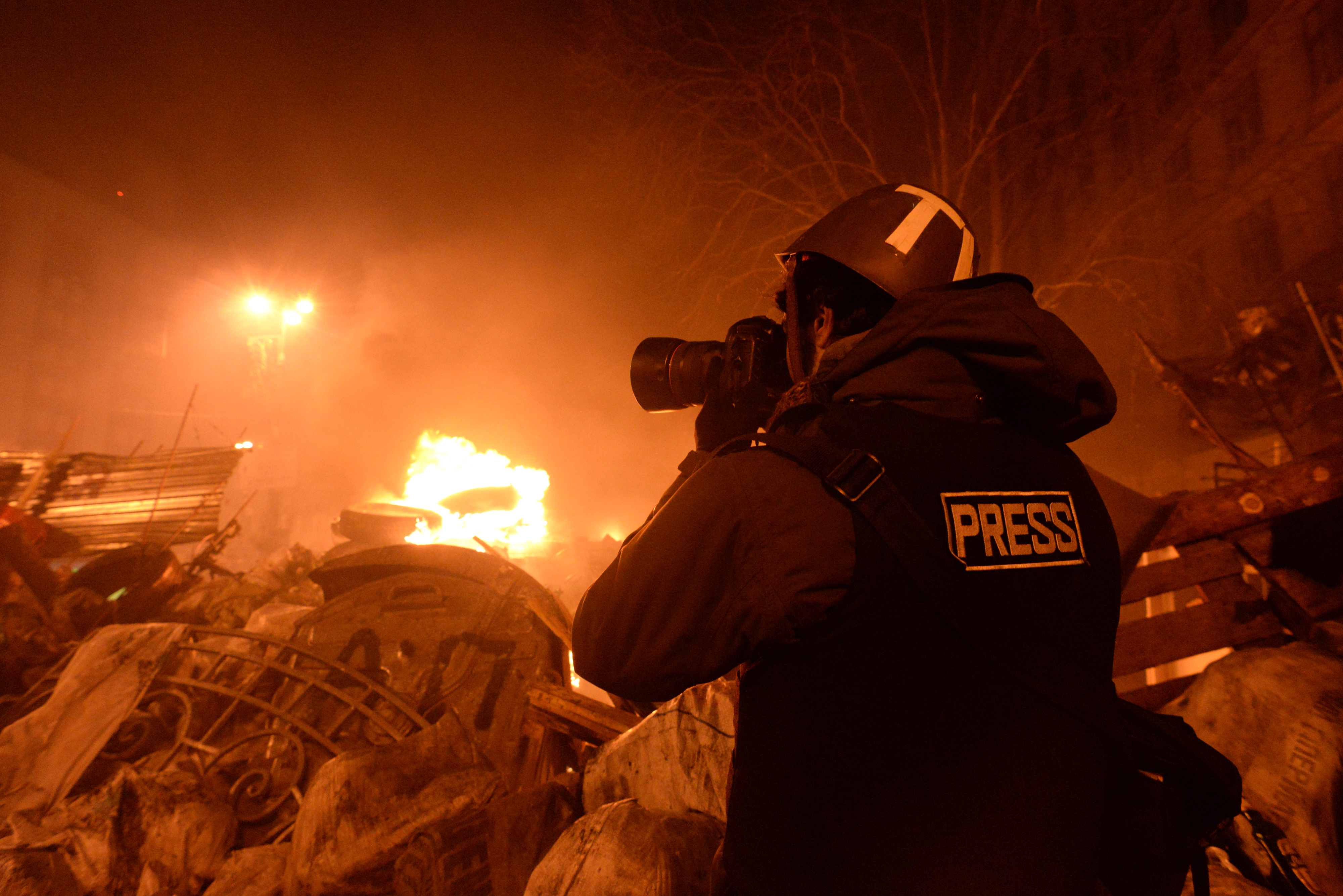 A journalists documenting the clashes in Kiev, February 2014 (Wikipedia)

After the publication of a preliminary list of journalists who had been in Donbass, two new lists have appeared online

On May 10, Mirotvorets, an Ukrainian website, published a list of all journalists who had worked in the separatist territories of the East during the last two years of war. A group of hackers, linked to an organization founded by Georgiy Tuka, former governor of the Luhansk region and current Deputy Minister for the "temporarily occupied territories," has stolen the journalists' names from the separatist authority’s database. New lists have been added in the past few days.

Over 7 thousand names, mine included, of journalists, photographers, cameramen, fixers and media workers have been listed in an Excel file named "Scoundrels". Even worse, along with their names, other private data such as phone numbers and email addresses have also been made public.

The group behind the operation, which manages a database of separatist militants and collaborators, and reports them to the Ukrainian justice system, said that "the publication of the list is necessary because these journalists have collaborated with members of a terrorist organization."

Roman Zaistev, director of Mirotvorets, added that "a collaboration means having a relationship and being bound by a mutual commitment. These subjects are somehow connected with the enemy”.

Since the outbreak of war in Ukraine, more than 7,000 journalists have reported the conflict directly from the ground. In order to access the ATO area, the name for the area of military operations, accreditation from the Kiev Ministry of Defense was necessary. Those who decided to do so also on the separatist side, had to do the same thing in Donetsk, by registering at an office of the so-called Ministry of Information of the self-proclaimed local authorities. In both cases, it was not a choice, but a necessary condition for working in the area.

After having gone unnoticed for a few days, the list received an enormous echo in international media when Anton Gerashchenko, an MP with the Popular Front of former Prime Minister Arseniy Yatsenyuk, and advisor to the Ministry of Interior, published it on his Facebook page.

"It is necessary to establish control on the accreditation of foreign journalists in Ukraine," wrote Gerashchenko, "and to foresee the expulsion of those journalists who violate Ukrainian law."

It is unclear, however, how one can violate Ukrainian law in territories outside the Kiev control, de facto subject to the authority of the self-proclaimed separatist governments.

In a later post, Gerashchenko added that it is certainly against the law to access the separatist territories from borders not controlled by the Ukrainian border police. Vitaliy Portnikov, an authoritative Ukrainian commentator, wrote that "foreign journalists should access Donbass and Crimea only through the Ukrainian checkpoints, or else face expulsion from Ukraine for up to 10 years."

Easy to say and a bit less to do, when, in order to enter Crimea, like it or not, a visa needs to be issued by the Russian embassy.

The conflict in Ukraine has reopened the debate in Europe about the influence of propaganda in the public sphere and on the great distortions being brought to the domain of freedom and pluralism of the media. A recent OSCE report analyses the regulatory framework, the tools available to limit the impact of propaganda and the specific case of Ukraine.

The publication of the list has created an uproar in the media world. Charging as “collaborators of separatists” the journalists who have provided information from the war zones out of government control, means endangering their safety. Also, it twists their work, by connoting it with a partisan character. It's basically what the current Minister of Interior, Avakov, said. "I find it impossible to have any contact with the self-proclaimed authorities who are occupying our territories, impossible and immoral," he wrote on Facebook. "It is your choice to collaborate with the separatists, don't hide it."

Meanwhile, a petition was signed and sent to President Petro Poroshenko, in order to ban the journalists in the list from the Ukraine.

The Mirotvorets organization has already been subject to controversy in the past. In April 2015, the Ukrainian journalist with strong pro-Russian positions, Oles Buzina, and former member of Rada, Oleg Kalashikov, were found murdered less than two days after their names and addresses ended up in the Mirotvorets database.

The Secretary General of the Council of Europe, Thorbjørn Jagland, has written to Poroshenko to express concern about the publication of the list that "threatens the personal safety of the journalists, some of whom have already received threats". The mass distribution of personal data - the letter continues -, raises serious questions of legality with respect to the entire regulations of the Council of Europe on the protection of human rights and personal data. "It is particularly worrisome," Jagland added, "that the action has received the support of some politicians, including members of parliament".

Even the OSCE Representative for Media Freedom, Dunja Mijatović, expressed concern about the safety of journalists operating in Ukraine after their personal data was leaked. "It is a very disturbing event, that could worsen the state of journalists’ safety," said Mijatović. "Journalists report information of public interest and should not be attacked for doing their job."

Finally, even the Committee to Protect Journalists (CPJ), a nonprofit organization based in New York, has taken a strong position on the incident. In a statement released the day after the publication, it states that "the CPJ condemns the publication of personal data of thousands of journalists and media workers who have performed their duties in the east of Ukraine, and denounces the approval of this act by members of the Ukrainian parliament."

Even in Ukraine some opposition has been expressed, especially by media organizations. To date, however, a position on the issue is lacking within the government, in particular in response to the numerous international requests. The only shy gesture of official disapproval of the list is the opening of an investigation by the Prosecutor of Kiev for violating Article 171 of the Penal Code for obstructing journalistic activity.

Meanwhile, after having been removed, the file with the names is back online. Now, the publication of two new lists, in defiance of international protests, worsens the situation and adds insult to injury.