Turkey, the triangle of the three s's 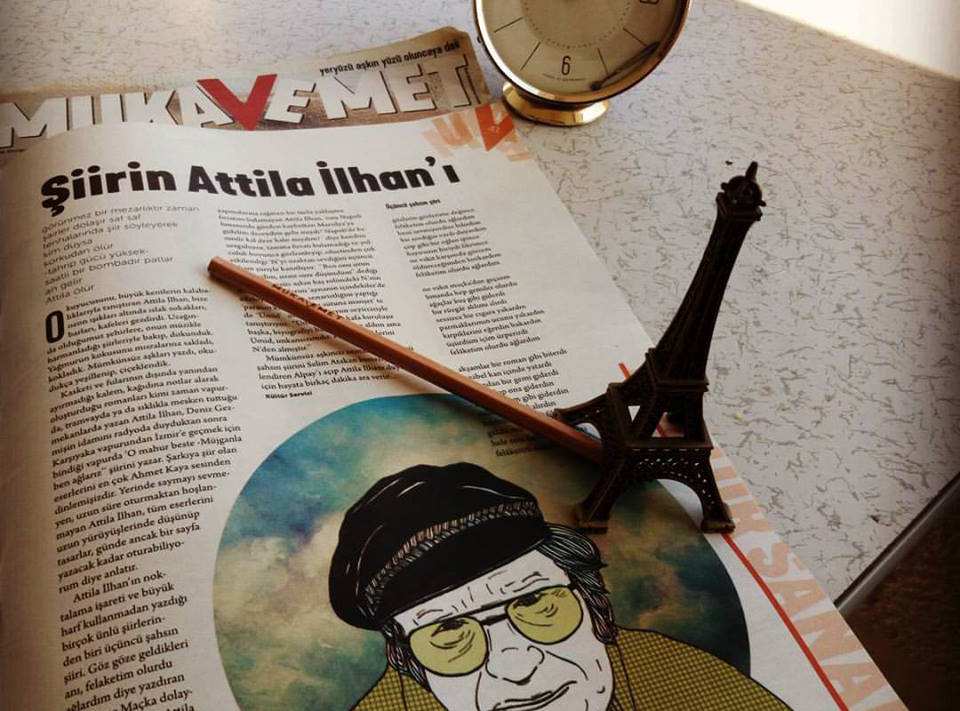 "We call it the triangle of the three s's: sermaye, sendika, and siyaset – capital, unions, and politics". An interview with the journalist and activist Özgür Karaduman about consensus and dissent in Erdoĝan's Turkey

Özgür Karaduman is a political activist and editor in chief of the magazine Mukavemet  ("Resistance"). The editorial office, which is also a cultural centre and a legal support office, is located in Istanbul, but Karaduman and his collaborators are engaged on several fronts, often in the poorest areas of the country. For example, the Mukavemet group has provided immediate legal and political support to the relatives of the victims of the "Soma Disaster" (where 301 miners died in May 2014) and has been involved in educational projects in the mountain village of Aladaĝ (where a fire in a female dormitory cost the life of 12 girls last year). We discussed the social and economic basis of Erdoĝan's consensus, Turkey's massive internal migrations, and how this can be the foundation for building a hypothetical dissent base.

Erdoĝan is leading the country in a more and more authoritarian way, yet we can say that political authoritarianism is not a new phenomenon in Turkey. What is Erdoĝan's specificity then? What makes him different from other leaders in Turkish history?

I would try to reverse the question. Many think that Erdoĝan is changing the laws and policies of the country, but I believe instead that the changing conditions of the country and of the whole world have shaped Erdoĝan and his ways. In other words, Turkey, Europe, and the world have entered a new phase in their history and Erdoĝan is a perfect tool for the needs of this new phase, which requires more and more authoritarianism and competition.

I think that in order to understand the actions of the current Turkish leader we should look at the end of the Cold War. The presence of the Soviet Union was a danger for Western governments that – also to overcome this danger – made great concessions in terms of social and labour rights, welfare, and so on. With the disappearance of the Soviet Union, neo-liberalism has been able to present itself as the universal economic paradigm, and the pace of global investment has grown dramatically. Thus, the demand has grown for leaders who could guarantee the free movement of capitals and who could remove any barriers and opposition to free trade. In Turkey, Erdoĝan was the most equipped and ready to meet this need.

An example: the construction is about to be completed of Istanbul's third airport, which is supposed to become the largest in the world. This is a 7 billion dollars investment. Prior to the beginning of the construction, the Confederation of Environmental Engineers filed a lawsuit in an attempt to halt the works, in consideration of the excessive environmental impact of the project (over two million trees cut). Let's just compare these two figures: an official paper presented by attorneys, which probably cost about one Turkish lira, against 7 billion dollars in revenues for the various companies involved!

This is to say that it would be wrong to think that today's Turkey is ruled by the delusions of a megalomaniac sultan. In fact, there are interests and conditions that push Erdoĝan to make certain political choices.

You talk about trade, free movement of goods... There are also large movements of people in Turkey, both inside and outside the country. Are these related phenomena?

They certainly are, and I would also say that these are decisive phenomena for political change. Leaving aside the Ottoman period, where people's movements within the country were largely forced by the government, the Republic's period has had four or five major migration stages.

The first of these occurred after the Second World War, as a result of the Marshall Plan. The United States asked Turkey to increase defense spending and to modernise agriculture. Therefore, tractors and modern agricultural equipments came along together with financial aid. This caused strong imbalances in rural life, and many were forced to emigrate, as we know – especially to Germany, which at the time could absorb labour for post-war reconstruction.

Then, in the 1960s, as a result of rural transformations and capitalist development, a huge mass of people started heading to the big centres: Istanbul, Ankara, Izmir, Adana, Mersin... and huge slums rose around the cities. Peasants came at night to avoid police checks and built their huts in a few hours. This is why these neighbourhoods are called "gecekondu" in Turkish (literally, "suddenly at night"). Now, these people moved to town, but they were basically excluded from urban life in terms of services, rights, and so on.

The interesting thing, though, is that during the 1970s in Turkey – as in other parts of the world – student protests spread and many revolutionary socialist groups, associations, and student collectives were born. One of the actions of these groups was to go to the slums and politically organise the newly-arrived peasants, also defending them from the abuses of police and government, that tried to demolish their homes. Thanks to these contacts, slum dwellers gathered in unions or committees and voiced their claims, obtaining services and greater rights from the government and "normalising" the situation in the neighbourhood.

Does this type of organisations still exist?

The 1980s were a period of economic and political restructuring everywhere. In Turkey, the military coup neutered any kind of socialist group. Lastly, in response to the invasion of Afghanistan by the Soviet Union, Carter's "Green Belt" doctrine was developed, which, among other things, allowed various groups of Islamic inspiration to gain greater power in the area. All this was reflected in the life of gecekondu: people continued to migrate from the villages to the cities, but the protection role played by student groups in the 1970s was taken on by Islamist associations – obviously, with the latter demanding obedience to local religious authorities and pushing the inhabitants of the poorest neighbourhoods into a more "confessional" lifestyle.

To some extent, processes in those years affected all the countries in the area, from Iran to Algeria, from Iraq to Egypt. But we would be wrong to read them as absolute, since another important variable played a part in their development – work. In the 1970s and 1980s, women from the poorest neighbourhoods started to work as house-cleaners for families in wealthy areas. The pictures and videos from that period show these women wearing traditional village clothes under their skirts. In terms of clothing and lifestyle, it was a hybrid cultural form between that of the city and that of the village. Likewise, today we can see how many girls wear the veil, but associated with blue jeans, make-up, and low necklines. Why? Because they are forced to wear the veil by the presence of Islamist groups n their neighbourhoods, which provide families with protection and services, but on the other hand they work in a capitalist society, which pushes them towards a different lifestyle.

I believe that this is a strong element of distinction between Turkey and the Gulf countries, for example. Where wealth comes from oil, women are not forced to work and Islamic tradition can easily impose the full-face veil or other forms of domestic control. Therefore, I think that today it is difficult to do opposition at a purely political level – attention needs to be paid to these elements, it is necessary to act in the social and economic field.

Let us not forget that the AKP started first and foremost as a social movement, which has played a role in the dynamics described above by providing protection and services and thus securing part of its electoral base. More generally, if economic processes make people increasingly poor, it is natural that they lose hope in this world and turn to religion, which fills first of all a sense of void. But there are contradictions that need to be addressed.

Back to migrations, for example, we notice how other internal movements within the cities themselves have begun. The higher middle class of recent wealth, that had first moved to the suburbs, now intends to return to the more central gecekondus. Therefore, the gentrification process is pushing the poorest sections of the population to the outer bands of the city. In Istanbul, for example, it affects the districts of Tarlabaşı e Sulukule. Now, these dynamics are generating discontent and exposing the huge speculation carried out on the backs of the poor, who tend to support the AKP.

Another great contradiction involves social rights, work, and education. The economic system is being shaped in a way that increasingly binds workers to the party – in many cases, in order to get a job you are forced to become a member of the AKP, which automatically enrols you in a union that actually does the interests of the government. It is clear, therefore, that the system is not built to protect the rights and health of those who work and study. Take, for example, the two "social murders" of Soma and Aladaĝ.

What do you mean by "social murders"?

Aladaĝ is a small village in the mountains of southwest Turkey, where services are scarce. For years, the government has been closing schools and public dormitories – with the official explanation that buildings were crumbling and unsafe – in favour of private religious institutions like the one where the 12 girls died. These associations operate on the borders of legality and, in addition to violating safety standards, impart fundamentalist education in order to tie the local population to their ideology. During the fire, all dormitory doors were locked, in compliance with the tenets of sex segregation.

Soma is a similar context, made of small and very poor centres, with a capillary AKP affiliation system. This mechanism is also aggravated by the banks: when a person finds employment, for example as a miner, banks offer loans to cover various expenses and services, like housing and cars. In fact, this is a way to make the worker indebted and more vulnerable. Mukavemet organises mobilisations and demonstrations with the relatives of Soma victims and offers them legal assistance, and we see how often those who want to talk or just participate in our events are threatened – for example, they are told that the bank will withdraw all loans. In other cases, there were direct attacks with lynching attempts.

Now, these are "social murders" because they are not caused by a "tragic accident", as the government says, or by the "will of God", as many of the victims' relatives repeat on the basis of the religious education imparted to them, but by specific social and political mechanisms. They are at the centre of a particular triangle of interests that we call the "triangle of the three s's": sermaye, sendika, and siyaset, or capital, union, and politics.

If we look at polls, we see how the government's consensus has narrowed down in these areas. But this does not happen automatically, it takes bringing support – material support, first of all – and it takes listening. This is what we are trying to do in Soma, with demonstrations and labour protection, and in Aladaĝ, by organising summer camps where we offer families another educational perspective. Real political change requires first and foremost a cultural change – it is not about slogans or posters, but about connecting with the everyday life of the oppressed and working with them to improve their existence.