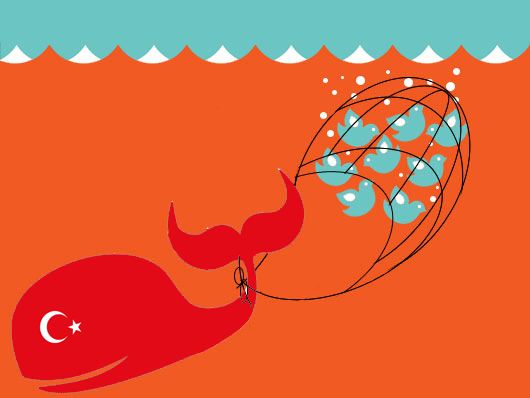 While Turkish PM Recep Tayyip Erdoğan heralds the advent of a new Turkey, his war on social media and new powers granted to intelligence agencies raise fears about freedom of information and the state of democracy in the country

In his 46-minute televised “balcony” address , given a few hours after his victory in the local elections held on March 30th, Turkey’s Prime Minister Recip Erdoğan talked about many things. Most notable was his reference to the start of a New Turkey, cleaned of “parallel structures” and with no more tapes, wiretapping or scandals throwing mud on the state. “Those responsible for these wrongdoings will be punished and this New Turkey will be once again free,” the PM stated. Far from that balcony and from the crowd gathered to listen to the heated speech, other Turks were not so joyful, as the New Turkey promised by Erdoğan is clearly not suited to them.

When Turkey was hit by the wave of what quickly became known as the Gezi Protest (or OccupyGezi online), it wasn’t the local media that televised the police brutality, the injuries and the violence. Young protesters were quick to mobilize and share the news via smart phones and social media applications, with Twitter playing the biggest role. “This revolution won’t be televised, it will be tweeted” graffiti on a wall somewhere near Taksim Square read. Indeed it was.

Facebook and Twitter are the two social media platforms with highest user penetration in Turkey, but this is one area of growth that Turkey’s Prime Minister is not so happy about, especially since the Gezi protests. Following the December 2013 graft scandal, in which classified information was leaked to the press and spread through social networks, and a wave of arrests and resignations embroiled the government's inner circle, the Prime Minister promised to “wipe out” the microblogging website, threatening to ban it and other popular platforms.

And he did, when the right moment arrived. Just a few days before the local elections, the Turkish authorities blocked Twitter and then YouTube . Erdoğan stayed true to his promise as he stood on the stage on March 21st, yelling into the microphone : “This Twitter, schmitter, we are going to extirpate it. Yes, yes, all of them! And I do not care what the international community has to say!”.

From a purely statistical point of view, Turkey, with its 12 million users, is in the top ten of Twitter-using countries . As per the technical one, on the very day that Twitter was blocked, more than half a million tweets were sent , according to Twit Turk, a Turkish-language tweet aggregation and ranking platform.

Banning is not the only ammo that Erdoğan fired in his war on social media. During the Gezi Protest, in an attempt to somehow discourage people from using social media, the government resorted to bizarre information campaigns. The text of one of these advertisement s read: “Violence is a crime. What about the Internet? Absence of rules does not mean liberty!” Basically, the ad equated the use of the Internet to physical violence against another person (in this case, a woman- a sore topic in Turkey, given how much violence women face on a daily basis).

There were also attempts to launch AKP’s very own digital propaganda team, run by tech savvy, pro party youth who monitor online contents and share party perspectives, images, and news on Twitter, Facebook, YouTube, and Instagram. China has done something similar with its “50-cent party ” and, more recently, so has Israel . This decision came shortly after the summer protest, which shocked the country and left the ruling government weakened on at least one front: online media.

The social media struggle flared up again after some video recordings of key government officials (and their sons) engaged in corruption appeared on YouTube, sparking scandals. On 6 February 2014 the government moved quickly to propose a series of changes to the existing Internet Bill, law number 5651, which was enacted in May 2007 and paved the way for the recent wave of censorship.

According to the well known Turkish journalist Yavuz Baydar, these amendments are a sign of a deepening regress ion of the right to freedom of expression in Turkey.

The timing of the bill is troublesome as well. The suggested changes called for:

The most disturbing possible TIB intervention is the URL blocking, as this would require the government to rely on deep packet inspection, “an intrusive form of online surveillance” says Ahmet Sabancı, member of the Alternative Informatics Association.

All these recent decisions are a sign that Turkey is sliding toward “internet authoritarianism”, wrote Geoffrey King, the head of Internet advocacy at the Committee to Protect Journalists.

Authoritarianism or not, the signs are not promising. On April 17th, following meetings with Twitter officials, Turkey’s telecommunication authority said it will “pixelate Twitter posts to eliminate malicious contents”. Communications Minister Lutfi Elvan also claimed that Twitter already deleted over 200 pieces of content and will continue with the execution of five court orders (Twitter, on the other hand, confirmed the removal of only some contents).

There is a catch, however. Technically, Turkish authorities cannot simply “pick and choose which Twitter content [they] can censor ”. Instead, Twitter itself has a specific tool for this purpose, used in response to “a valid and properly scoped request from an authorized entity", the explanation posted on Twitter’s blog says.

Clearly there is an attempt on behalf of Turkey's establishment to portray itself as winner in a campaign it began almost a year ago with the outbreak of the protests. Continuing accusations against Twitter for tax evasion and other evil deeds and Twitter’s decision not to open an office in the country only prove that there is more in this story than what officials are sharing with the public.

Although Turkey’s constitutional court - the country's highest court - ruled that the decision to ban Twitter contradicted constitutional principles and ordered an immediate lift of the ban, Erdoğan systematically continues to demonize social media platforms. After all, it was Erdoğan who called Facebook “immoral”, YouTube “a devouring force,” and promised to “eradicate” Twitter. Indeed, there is no guarantee it won’t happen again: YouTube remains blocked, and the bill that grants the government broad power to censor the Internet is still there.

A new threat came from a law, approved by the parliament on April 18th, which enhances the powers of Turkey’s very own National Intelligence Organization (MIT as it is known in local speak). The new legislation offers MIT a carte blanche, giving the latter access to information collected by public and private institutions (among these the internet providers) and expanding its ability to carry out covert operations. Paired with the mentioned Internet Law, MIT’s new powers raise fears around the possibility of massive digital profiling and the birth of an “intelligence state”.

While the main opposition party argues the new bill means giving the MIT “an authority to kill ”, pro AKP members, like the Minister of Interior Efkan Ala, see the bill as a positive move towards a better democracy. Even if the law is still waiting for the approval of Turkish President Abdullah Gül, the past shows that, when the time came to approve draconian changes to the Internet law, Gül approved them.

At the end of the day, the explanations the ruling party officials offer on the recent wave of legislative changes and decisions don't matter. Few facts remain: Turkey is described as the “world’s leading jailer of journalists” by the Committee to Protect Journalists and ranks 154 out of 179 countries on the Press Freedom Index compiled by Reporters Without Borders.

President Gül has the power to veto, but if the Parliament continues to press forward with the bill and sends it back with few changes, there is little he can do but to ratify it. YouTube remains blocked. The Prime Minister’s assertive statements raise alarm as the country is driven into an information war. And so far, no one has given a promise of a stable Turkey to come, neither online nor offline.