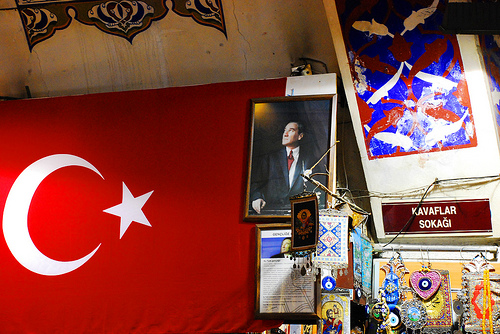 The Justice and Development Party (AKP) seized power in Turkey eight years ago, and is likely to win the next general elections, scheduled for 12 June. The political analyst Hamit Bozarslan shows us what in his view are the roots of the strength behind Erdogan's party

How has Turkey changed since 8 years ago, when the Akp won the elections for the first time?

When Islamists took office in 2002, all analysts asked the same question: “Will they let them rule?”. Just a few years before, in 1997, the Army had forced an Islamist-led government to resign. The Constitutional Court, as well as the Army itself, the Kemalist intelligentsia, the parliamentary opposition led by the Chp (the Republican People’s Party) and the ultranationalists of the Mhp, the Nationalist Movement Party, all tried to stand in Erdoğan’s way. They did everything they could to topple the Government. In 2007, the Constitutional Court declared illegitimate the appointment of Abdullah Gül as President of the Republic, elected by the Akp-led parliament. At that point, the Akp decided to have early elections. The Islamists’ victory was overwhelming, they went from a 34% to a 46% approval rating.

Between 2002 and 2008 many coups d’état were planned by the military, but they all failed. For the first time in the history of Turkey, the ultra-Kemalist ideology and the Army were excluded from the Turkish political arena. The Islamist approach, instead, has become dominant in Turkish politics and Erdoğan’s party is very likely to win the elections on June 12th, reigning the county for another undisputed 5 years.

Who are the voters of Akp?

Erdoğan’s party has drawn around it very diverse interests, creating what we could define as an internal coalition. In the rural areas, moderate Islamists enjoy the support of both the old conservative élite and the new middle class open to the world and born in the last 10 years, a period of quick economic growth for Turkey. In the cities, though, it is those living in the suburbs who support the Akp. Even though they leaned closer to the left in the past, they now see the party as a tool for social empowerment. Finally, supporting the Akp is part of the Kurdish community, because it is the only party, along with the Kurdish autonomists of the Bdp, to want the military conflict in the Kurdish-majority South-East to end.

Why has Erdoğan’s party become so dominant in Turkey?

The main factor that has allowed the Akp to make a name for itself is its capability to become state. Let me explain. In 2002, the victory of the Islamists at the elections had brought about a paradox: the Akp ruled, but it was a dissident party representing the anti-state. The dichotomy between state and government, characteristic of the official Kemalist ideology, has strengthened the Akp, identified as the party of the people fighting against state bureaucracy. Eight years later, we can no longer say that the Akp is a party outside the state, a dissident party. On the contrary: the Islamists have defined their own idea of state, they have become the state, and they more and more represent themselves as the incarnation of the state. This transformation has occurred through the marginalization of the Kemalist élite that used to control the Judiciary, the Army and politics, and used to be considered the fundamental pillar of the state.

The operation of becoming state also means deeply changing the state. This does not mean that the Akp has Islamized institutions, on the contrary: it has ideologically made the Kemalist break of 1923 its own, however shifting the balance in favor of a national identity built around an imagery that is not exclusively connected to the history of the republic founded by Atatürk, but which is also heir to the Ottoman empire. So it is not because Turkish society has become more Islamized, as many in Europe claim, that the Akp is successful, but more because Islamists were able to construct a new political narration that has become dominant. There is a risk, however: the more the Akp produces a statist thought, the less it needs democracy and the more it turns into an authoritarian party. Not openly, and not shrewdly: it is just that the reason of state risks prevailing over society’s request for democratization.

What are the political forces opposed to the politics of Erdoğan’s administration?

The main opposition movement is the Republican People’s Party (Chp), which presents itself as social-democratic, but during the 2000s it was characterized by a proto-fascist and ultra-nationalist stand. Today, the Chp’s historical leader, Deniz Baykal, no longer runs the party, as he was forced to resign because of a sex scandal. The current leader is Kemal Kılıçdaroğlu, a Kurdish alevi who has never had the courage to refer to his ethnic and religious identity. The Chp is still a point of reference for the declining Kemalist élite.

It will not obtain more than 20% approval, since it is not able to elaborate a political syntax and a manifesto that could give the Akp a hard time. Then there is the Nationalist Movement Party, the Mhp, ultra-right wing, led by Devlet Bahceli, openly anti-Kurdish, anti-Armenian and anti-Greek. The Mhp ideologues consider Kurds, Armenians, Jews, Greeks and the other minorities as ethno-classes which throughout history have repressed Turks, both as an ethnic group and as a social group. This theory lays its foundation in social Darwinism. Minorities are the internal enemy manipulated by external enemies in America and Europe. The Akp is seen as an instrument for foreign powers to carry out their own interests in Turkey.

The elections of the next 12th of June are going to be an important test for the Mhp: it is not clear whether the party, which had obtained 15% of votes during the last elections, and is now experiencing a decrease in approval ratings, will overcome the 10% threshold necessary to enter Parliament. Finally, there is the pro-Kurdish Peace and Democracy Party (Bdp), which in the 2009 administrative elections emerged as the first party in the Kurdish-majority South-East, and has around 5-6% support on a national level. At the next elections, the Bdp will present independent candidates to bypass the threshold and obtain representation in Parliament.

What about the left-wing liberal intellectuals who are so active in the defense of minorities rights and in the democratization process? What role do they play?

The liberal left staunchly supported the “yes” at the constitutional referendum that sanctioned that Turkey’s military leaders can be prosecuted for the acts committed during the 1980 military coup, along with changes to the judicial system. The liberal intellectuals, like Murat Belge, Ahmet Insel, Baskın Orhan, who promoted the “Yetmez ama, evet” campaign (“Yes but not enough) deemed those changes necessary but not enough. They now ask for a completely new constitution and the abrogation of the one born after the coup.

However, as I stated before, the Akp is occupying the vital ganglia of power and adopting an authoritarian rhetoric, and so the liberal intellectuals are now keeping their distance from moderate Islamists. The role of the liberal intellectuals is fundamental, since they were the first to promote a true debate on subjects previously considered taboo, such as the Armenian genocide and the Kurdish issue, fostering a multicultural idea of national identity. They are, however, a very marginal force, politically-wise.