Mustafa Akyol: the AKP is not too Islamic, but too Turkish

Turkey: why the constitutional-reform process matters 28/06/2011 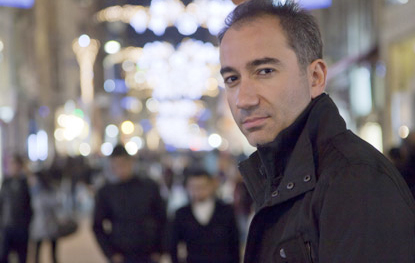 After ten years in power in Turkey, Erdoğan's AKP still has a reformist potential, but is becoming increasingly intolerant and confrontational. The issue, according to political commentator Mustafa Akyol, has more to do with the political tradition of authoritarian power in Turkey, than with the party's supposed “Islamic agenda”

Mustafa Akyol is a Turkish political commentator and author based in Istanbul. He graduated form the International Relations Department of the Bosphorus University, with a thesis on the Kurdish Issue. He's a regular columnist for Hürriyet Daily News, as well as for Star. He also appears regularly on Turkish televisions, particularly on political discussion programs. Over the years, his articles have been published in The New York Times, The Washington Post, The Wall Steret Journal, The Guardian, Foreign Affairs, Newsweek. He is the author of “Islam without Extremes: A Muslim Case for Liberty” (2011).

Our correspondent met him during the conference “The Middle East & North Africa (MENA) and the Balkans: Challenges and Transformation”, held in Sofia (Bulgaria) mid-December 2012.

Mr. Akyol, most Western media usually underline and show concern for the religious elements in AKP's political identity. During the conference, though, you stated that “if there is something that worries me about the AKP, is not that it is too religious, but that it is too Turkish”. What did you mean?

The AKP is a complex story: they have been the force which promoted many liberal reforms in Turkey in the past decade, dealing with the EU accession process, minority rights and so on. However, in the past few years, the AKP is becoming a concern for Turkish liberals, who defend the advance of a democratic agenda. The real issue is not Islamism. AKP is not an Islamic party in a classical definition, and of course they're not trying to impose the Sharia. The problem is that Erdoğan's party is becoming increasingly authoritarian in the way it uses its power. The Prime Minister doesn't like to be criticized, is manipulative on the media, very confrontational in his political style and not building dialogue with the opposition. Today there are reasons to criticize the AKP from a liberal point of view, since they're proving to be a growingly intolerant and arrogant party, but these reasons are not coming from any Islamist agenda.

After ten years in power, do you think the AKP still has will for liberal reforms? Can the party still claim to be a political force devoted to challenge the status quo? Or it became, and to what extent, the new one?

There is currently a discussion among Turkish liberals on this issue. Some people think that the AKP has become the new status quo, the new establishment that needs to be criticized and politically struggled against. Others say that, despite AKP's problematic elements, the party still has a reformist potential. Just last year the AKP announced that Kurdish language will be in schools as elective classes, something that means a huge change for Turkey. Just a week ago, permission to build a new church in Istanbul was given for the first time since the establishment of the Turkish republic. So they still promote some important reforms and, on the other hand they're quite successful on the economy, so for most liberal democratic minded people their agenda is still the most acceptable. Also because there is little alternative, since the opposition is not promising either. Personally,I'm still optimistic about Turkey's future, but the AKP shows more and more reasons to be criticized.

In your columns you often portray an internal struggle between a liberal and a more authoritarian area inside the AKP? Where do you place Mr. Erdoğan in this picture

Inside the AKP there are different people and different political views. According to me, in the whole Islamic segment of the Turkish society there are more liberal minded people than conservative or even intolerant ones. AKP is a combination of these factors. The same can be said for the Prime Minister. When you look at Erdoğan, sometimes you see a liberal leading Islamic figure, speaking about change, other times you see a defender of conservative values. In the end, this is exactly what makes the AKP popular: the party manages to get votes from orthodox Islamics, but also from the mainstream voters, who are happy especially with the economic success of the country. There are, of course, liberals in the AKP, who often criticize the party for being too conservative. It's a healthy thing that this discussion is going on in Turkey and inside the party itself.

What is keeping all these different souls together in the AKP? Erdoğan's charismatic leadership?

Erdoğan's leadership certainly plays an important role. On the other hand, the major opposition party (CHP) is still on hardcore secularist positions, defending ideological positions, like the ban on the headscarf and a veneration of Ataturk's figure. So it has little appeal on AKP's voters, since it doesn't seem to be a viable alternative to rule the country, promote development, and deliver on liberal reforms. We can criticize the AKP for not being liberal enough, but the opposition currently is not a better alternative. Some people think president Abdullah Gül could be a rival to Erdoğan, or the initiator of a different political movement when (and if) Erdoğan becomes the new President. That might be an option, but this process could as well develop inside the AKP, and not outside.

Do you see a liberal current inside the CHP?

Definitely, but it's still weak. The party has first to come to terms with Ataturk's heritage. The majority of CHP's members still looks at Ataturk as a semi-God, that cannot be questioned or criticized. The question is, Ataturk lived in the 1930's, when the world was very different and not very democratic. You can respect Ataturk as a political figure, but if you claim to be an ideological follower of “kemalism”, you cannot really be a liberal.

What is happening to the constitutional reform process?

This process has been blocked, to some extent, because the parties cannot agree on a common new text, plus Erdoğan started insisting on a presidential system, and being obsessed with this idea, since he wants to be the next President, a factor that is complicating the picture. Are we going to manage to vote a new constitution? Honestly, I don't know, but I'm not very optimistic about it.

You've been following the Kurdish issue for a long time. Which are the causes of the current stalemate and its re-militarization?

This is still Turkey's most dangerous issue. The war between the PKK and the Turkish State has killed more than 40 thousand people, and the fight is still going on. Erdoğan and its government made important reforms on the Kurdish issue and tried to start a negotiation with the PKK, but I think the PKK proved to be too fanatic, and resorted once more to violence. What will be the outcome, is unfortunately unknown. Negotiations failed, with both sides blaming the other one. There were mistakes also from the AKP's government side, but I think that the main responsibility falls on the PKK's leadership. Their demands were too hard to accept for the Turkish society, and when the AKP realized it couldn't go too forward towards them, the PKK started again attacking Turkish garrisons, leading to a military response by Ankara.

A thing that doesn't seem to have changed in these years of rapid change in Turkey is the mutual distrust by different segments of the society. The opponent is still “the enemy within”, and conspiracy theories keep on flourishing...

I believe this is Turkey's biggest weakness: we cannot really have a rational discussion. Turkey is still a paranoid society, and the level of mistrust inside the society is very high. Everybody depicts the “other side” in the worst possible terms: secularists believe that islamists always work to a “secret agenda” to impose the Sharia, islamists are convinced that secularists will try to make a military coup any time they can, Kurdish distrust in the State is very deep, and the contrary is true, too. We need a more honest and open dialogue: unfortunately the old confrontational culture is still dominant, and keep on being reproduced by Erdoğan, as well as by the other political leaderships.

The EU accession process was considered to be a strong ally for the Turkish liberals. This issue, however, seems to have become peripheral in Turkish politics...

The decline of the EU accession process in Turkish political agenda has certainly led to a decline in political reforms. This process was helping Turkey to liberalize its laws and political life. Unfortunately, especially because of the categorical rejection by some member states of the EU, like Germany and France, Turkey's dream to join the Union rapidly declined, and it lost the leverage it once had on Turkish politics. At he same time, the economic crisis in Europe made the EU much less attractive.

Do you see any chance to revive it in the next future?

It depends on how much Turkey perceives it has a clear future in the European Union. According to some, a chance could be provided by the development of a two-speed EU, with a central core led by France, Germany and a periphery represented, for example, by Great Britain. If this should become true, Turkey could find a place in this “second layer” of the Union. Currently, though, the EU access debate is not on the top of the Turkish agenda by any means.

In Turkey there is an increasing interest in the Ottoman past. Do you think that the Ottoman historical heritage could prove useful in the search for “liberal solutions” to current open questions in Turkey?

Clearly, we won't re-institute the Ottoman empire or go back to the past. Nevertheless, there is one thing about the Ottoman empire that makes a lot of sense for Turkey today: the notion of pluralism. The empire was not exclusively Turkish: Armenians, Kurds and other communities, both ethnic and religious, could manifest openly their identities. Today Turkey still suffers from a hardcore nationalistic view, which disallows any pluralism in society. To move beyond this model, dominated by a monolithic state for almost a century, maybe we can make use of some sort of inspiration from the Ottoman times.