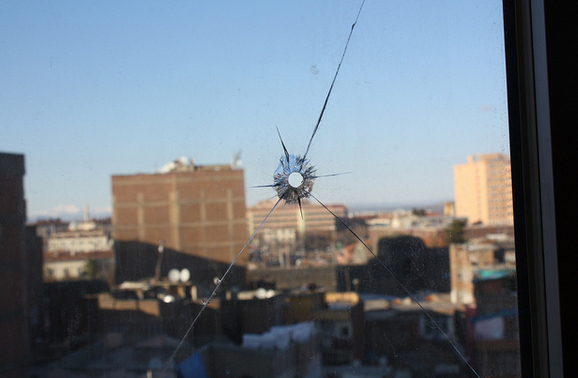 Elçi, president of the Diyarbakir Bar Association and a well-known figure in the Kurdish political movement, was killed on November 28th in an ambush, just after a public lecture in the heart of the city, during which he renewed his request for an immediate cessation of all armed operations in the region. Along with him two police officers were also killed. Over 50,000 people attended his funeral, demonstrating the great popularity he enjoyed.

Authorities have speculated that Elçi was the victim of the crossfire between police and unidentified individuals, or even that a "third component" may have targeted the lawyer in the confusion. The investigations are slow to start up and the crime scene, after four days, had not been made safe yet, also due to the continuing armed conflicts occurring in the area and the local curfew that allegedly delayed access to the area by the police.

According to Justice Minister Bekir Bozdağ, the cartridge case of the bullet that allegedly killed Elçi was identified among the 43 specimens collected, while another 40 findings were left on the crime scene without being collected. Naci Sapan, a member of the Republican Party, said that in the area "there are children playing with findings that would be important for the investigation". As the days go by, it becomes increasingly unlikely to be able to collect clues from the scene to identify the culprits.

Elçi had recently come under fire for an interview with CNN Turkey, during which he was insistently asked to take a stand against the PKK, the Kurdistan Workers Party, outlawed and regarded as a terrorist organisation by Turkey and the EU. The lawyer had described the PKK as an armed organisation with clear political goals and widespread local support, although its methods border on terrorism.

For this interview, the CNN was fined by the government authority for telecommunications for 70,000 Turkish liras, about 22,500 Euros. For not describing the PKK as a terrorist organisation, on the other hand, Elçi was arrested on October 20th and waited peacefully in his office for the police to pick him up and take him to Istanbul. Only a few hours earlier, at the microphones of Italian Radio Radicale, he had said: "They want to put me in jail for a crime of opinion, an injustice that is contrary to the Turkish Constitution and every international standard. The real reason is the coming elections (of November 1st, note) and this arrest is a political decision". Before being killed, Elçi was awaiting trial on charges of terrorist propaganda.

Elçi, president of the Diyarbakir Bar Association, was also known for the case of the two Vice News journalists Jake Hanrahan and Philip Pendlebury and their Iraqi interpreter Mohammed Rasool, arrested on August 27th for filming the clashes between the PKK and the Turkish army. While the two journalists were later released, after four months Rasool is still in jail, waiting for a hearing to be scheduled. Elçi was their lawyer.

The HDP called for a parliamentary inquiry arguing that the manner of the murder and the stifling persecution built around Elçi remind the equally tragic case of Armenian journalist Hrant Dink, assassinated in 2007 after months of media lynching and death threats.

While investigations are shamefully groping in the dark, the media and social media – and many politicians – seem to have already found the culprits. The pro-government press immediately accused the PKK of orchestrating the ambush. For the Kurdish community, on the other hand, Elçi's is yet another, obvious State murder. Ahmet Elçi, his brother, gave a vitriolic comment: "My brother asked for peace, but we know very well all the dirty tricks the Turkish state is capable of".

Public opinion has mobilised, with thousands of people demonstrating in Amed – as the Kurds call Diyarbakir, Ankara, Izmir, and Istanbul. In the capital, the protest was immediately repressed by the police, who attacked with tear gas and irritating water cannons.

There is great mistrust in the broader population in the ability and willingness of institutions to shed light on an act of violence that comes after months of violent clashes in southeastern Turkey, which the Kurds identify as northern Kurdistan.

The clashes between the Turkish army and the PKK have been shaking the area since last July. After the failure of the peace process, the PKK launched a different strategy than in previous years, moving the theatre of war from the mountains to the urban areas and reorganising among young people through the Revolutionary Youth Movement for the Fatherland (YDG-H).

Following the autonomist experiments in the Rojava (the area under Kurdish control in Syria) and working with the new theoretical impulse of the imprisoned leader Ocalan, who has abandoned the Marxist and nationalist ideology in favor of democratic confederalism, many south-east neighbourhoods have sought to declare de facto autonomy, partial or total, from the central state. Trenches were dug in the streets and blankets hung between the buildings to cover the line of fire of snipers.

The reaction of the Turkish state was quick. Total curfews were declared in many cities and violent mopping up operations were launched. During the curfew, people cannot leave the house even to buy food or go to the hospital, while water, electricity, and telecommunications are cut. Cizre, Nusaybin, and Sur have endured similar conditions of isolation for days, even up to two weeks. Buildings are riddled with bullet hits and whole districts were razed to the ground by mortars. Another curfew was declared in Diyarbakir after Elçi's murder.

While these events are reminiscent of the terrible nineties, what is even more disturbing is the way this new conflict is bringing to Turkey the worst of the nearby Syrian war. The militias that orbit around the PKK galaxy, that have benefited from the know-how accumulated in the struggle against the IS, are faced – in addition to the Turkish police and army – with paramilitary teams of uncertain origin and affiliation, but well-known brutality. They call themselves Esedullah, the Lions of Allah, wear black, and accompany the common nationalist slogans with invocations to God – an unprecedented fact.

HDP representatives and human rights activists have expressed their dismay at the way these militias, which only operate within the districts subjected to curfews, behave very differently than government troops, displaying unmatched ruthlessness.