Between Syria and Turkey: the Kurdish factor 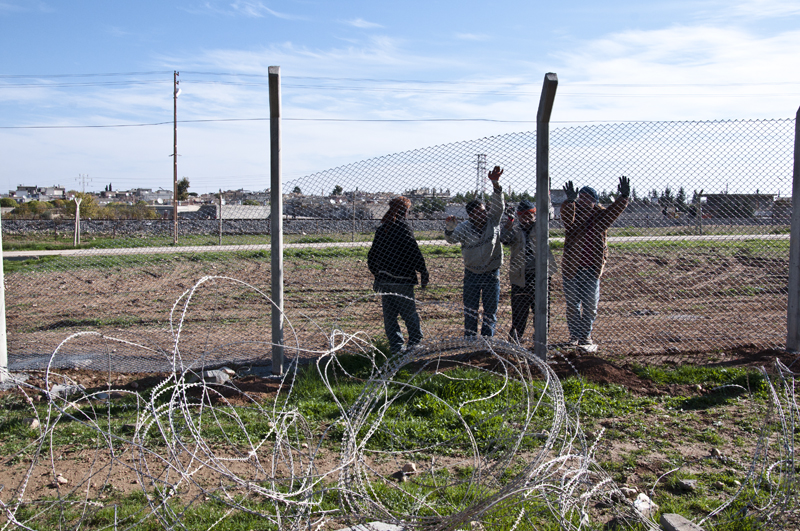 In north-eastern Syria, a region with a Kurdish majority, the civil war becomes a clash between the Free Syrian Army and the Kurdish-Syrian separatists of the Democratic Union Party (PYD). A report by our correspondent from the Turkish-Syrian border

In the small public gardens just outside the village of Ceylanpinar, war looks like a reality show that groups of kids, elderly, and Syrian refugees watch from behind the railway line that marks the border between Turkey and Syria. Ras al-Ayn has been the theatre of clashes between anti-regime Islamist groups and the Kurdish-Syrian separatists of the Democratic Union Party (PYD) for weeks. Until a few months ago, however, it was only the southern part of the village of Ceylanpinar – the tracks, merely a geographical point of reference. "The distinction exists only in Turkish and Arabic. For us Kurds, there is no difference – Ceylanpinar and Ras al-Ayn are simply Serêkaniyê (the Kurdish name of the town, ed) north of the railway and Serêkaniyê south of the railway", explains mayor Ismail Arslan of the pro-Kurdish Party for Democracy and Peace (BDP).

Life in Ceylanpinar flows peacefully. Along the main street, vendors cook long skewers of mutton liver on smouldering embers. Groups of friends walk and joke on the street that used to be the busiest in the village, when the border was still open. Everything is seemingly normal, as reminded by the sound of bullets and bombs from across the border and the constant comings and goings of Turkish army tanks.

The Democratic Union Party (PYD) is the main party of Syrian Kurds, founded in 2003. Its militants, together with those of the Kurdish National Council (KNC), established the Popular Defence Units (YPG) that control north-eastern Syria since July. "The PYD has an ideological, but not structural connection with the Workers' Party of Kurdistan (PKK)", said the leader of the movement, Salih Muslim. The movement is part of KCK, the Union of Kurdish communities, an umbrella group founded by Kurdish separatist PKK leader Abdullah Ocalan.

A fight in the fight

Since the beginning of November, adding to the war between the Free Syrian Army and forces loyal to Assad, another conflict is going on within the anti-regime front between Islamist and Kurdish rebels for the control of the north-east of the country. In late July, the guerrillas of the Popular Defence Unit, linked to the autonomist PYD (close to the Turkish PKK) took control of most of the Kurdish cities in the north of the country and created an "autonomous Syrian Kurdistan", forbidding entry to both rebels and Assad's troops. Despite occasional tensions, there were no clashes in the area for months, but at the end of October, with the increasing influence of radical Islamist groups such as al-Nusra and Ghuraba al-Sham, irritated by the emergence of a secular formation like the PYD, tension turned into open conflict.

On November 19th, the Sunni insurgents who wanted to take control of the Kurdish area attacked a PYD checkpoint killing six militants in Serêkaniyê, on the imaginary line that divides the area controlled by Kurdish separatists from that under the control of the Free Syrian Army. The battle lasted twenty days and caused about a hundred deaths. If Kurdish rebels have prevailed so far, the risk remains high and many civilians were forced to flee.

Not all refugees are equal

A few meters from the town centre, along the labile border between Turkey and Syria, a group of workers escorted by the Turkish army is erecting a barbed wire fence over two meters high. On the Syrian side of the border, women with young children in the arms, young people holding plastic bags with their few belongings, and men with unkempt beards are harshly rejected by the military guarding the border. At regular intervals, Turkish army tanks, with cannons pointed at Syria, parade to support the guards standing in row, ten feet apart from each other.

"Over 3,000 people have fled from Ras al-Ayn in November", says mayor Ismail Arslan, showing a piece of grenade that came from Syria and exploded in the courtyard of the town council at the beginning of the conflict. According to Arslan, the government does not treat all refugees in the same way: "In the official refugee camp run by the Red Crescent they were told there was no room for them, the Turkish authorities use double standards, they support the Sunni insurgents and fear there are separatists among Kurdish refugees, so the municipality helped refugees by providing food, blankets, medicines, and a place to stay".

On the evening of December 13th, the emergency room of the public hospital was in tilt. "Over 20 fighters arrived with severe burns and bullet wounds, one died soon after arrival", says a doctor who prefers to remain anonymous. Out of the hospital, people are protesting because the ER was temporarily closed to civilians: "It is not the first time. We are instructed to give fighters priority and they often are in critical conditions and in need of immediate care".

Firaz, 20, anti-regime militant, is sitting at the centre of a room next to two of his comrades, wounded in the recent fight – he brought them to safety along with ten other people on a van. His thick, dark beard hides the face of a boy. In a firm, forcibly serious voice, he explains why he supports al-Nusra and considers the Kurdish militants of PYD as enemies: "We want to raise the flag with the words 'There is no God but Allah and Mohammed is his prophet '. The Kurds are infidels on the side of Assad".

Rojda, a Kurdish refugee and a teacher before fleeing to Ceylanpinar, however, trusts the PYD: "The fact that guerrillas support Assad is just a rumour, under the Baath regime Kurdish identity was not recognized, but after the start of the conflict, we re-appropriated our culture and our language. We opened schools, cultural centres, women's groups and the PYD created a legislative assembly and courts independent from Damascus”. She is not prepared to lose that freedom again. "My cousin and other young people in my family are all fighting. I also wanted to enlist, as many other Kurdish women did, but the leaders of the PYD led me to desist from my purpose, since I have a young daughter to take care of. But my heart is with them".

After two years of war, while the Syrian Free Army rebels advance in Aleppo and Damascus, one of the biggest unknowns for the post-Assad remains the conflict between radical Islamist rebels who are taking more and more power in Syria and the Syrian Kurdish separatists of PYD, who want an autonomous Kurdistan and a new constitution that respects the rights of minorities. This is a problem that the newborn Syrian National Coalition and the international community will have to take into account soon if they want to avoid the "Somalization of the conflict" – a fear expressed in an interview on the newspaper al-Hayat on November 6th by Lakhar Brahimi, Special Envoy of the UN and the Arab League in Syria.