Turkey, a Newroz of peace 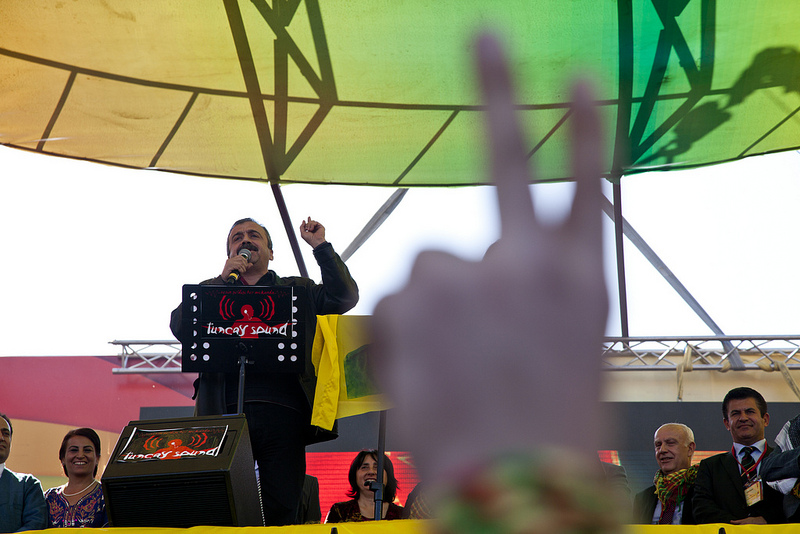 This year, the Newroz celebrates the hope for a lasting peace that will put an end to the armed conflict between the PKK and the Turkish state. Abdullah Öcalan called to lay down the arms and begin a new era of political fight

On March 21st, hundreds of thousands of people arrived in Diyarbakır for the Newroz early-spring celebration and broke down the barriers going up to the stage just before Sırrı Süreyya Önder and Pelvin Buldan, MPs of the Democracy and Peace Party (BDP) read – in Kurdish and in Turkish – the long letter Abdullah Öcalan wrote in his cell on the prison island of Imrali, where he has been serving a life sentence since 1999.

"I declare in front of millions of people the beginning of a new era. It is time for weapons to fall silent and for politics to speak. It is time for our armed units [the PKK] to retire outside the borders [of Turkey]. It is not an end, but a beginning. It is not the end of our struggle, but the beginning of a new kind of struggle. A struggle based on ideas, ideology, and democratic politics".

The historic message of the leader of the Kurdish movement leaves no room for doubt – if the government is willing to seek a political solution, the Kurdish Workers' Party will put an end to the armed struggle. 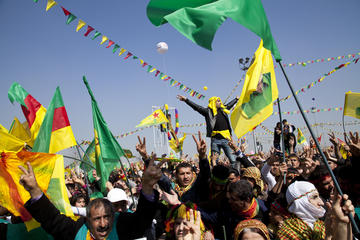 Öcalan's statement is the first stage of a plan designed in the last months by the Kurdish leader and Hakan Fidan, chief of the Turkish secret services and loyalist of Prime Minister Erdoğan, to put an end to a conflict that has caused over 40,000 deaths in the south-east of the country since 1984. In early January, BDP members were allowed to see Öcalan after months of isolation. It was the first of a series of meetings in which the founder of PKK has outlined the coordinates of his road-map for peace.

"After over one hundred years of Kurdish people's struggle to assert their rights, we are at a turning point", told Osservatorio, during the Newroz celebrations, Gençay Gürsoy, physician, historian, human rights activist, and columnist of the pro-Kurdish newspaper "Özgür Gündem".

“For the first time, the Turkish state agreed to sit down and look for a political solution, and this is the result of the struggle of the Kurdish movement. Although there will undoubtedly be ups and downs in the negotiation, there is no turning back". According to a survey conducted by the Pollmark institute on January 23rd, the negotiation is also supported by the Turkish public, with 69.5% of respondents in favour.

A change of course, that of the Erdoğan government, related to the increasingly important role played by Kurds in northern Iraq – an entity virtually independent from Baghdad that shares significant business relationships with Ankara – and in north-eastern Syria, since last July controlled by militants from the Democratic Union Party (PYD), an autonomist movement close to the PKK. Another factor is the need to unlock the negotiations on the new constitution, under discussion in parliament for more than a year and a half.

Before March 21st, Turkish newspapers, especially "Milliyet", had published several rumours and even transcript excerpts of the meetings between the BPD delegation and Öcalan. It was widely expected that "Apo", as his supporters call him, would invite the 3,500 PKK militants in Turkish territory to retreat in northern Iraq, but the Kurdish leader went much further, announcing the end of the armed struggle and using a new rhetoric.

In his letter, Öcalan does not set preconditions for withdrawal and does not speak of the independence of Kurdistan – a claim already abandoned in 1999 – or autonomy, but simply of a "free, democratic, and egalitarian" Turkey, also referring to Islam as a unifying element and to the joint efforts of Turks and Kurds in the war of independence.

Most people on the streets of Diyarbakır have trust in Öcalan, but caution prevails given the failure of previous attempts to reach a political solution to the conflict, as in 2009, with the failure of Erdoğan's initiative to "open to the Kurds”. There are also those who vehemently oppose the withdrawal of guerrillas in northern Iraq: "When I heard Apo's message during the Newroz I felt like crying, it was a big shock" says to OBC Botan, 22, biology student at the University of Dicle, Diyarbakır. "I have dozens of friends in prison. If the PKK withdraws, who will fight for their liberation?".

Over ten thousand local government officials, journalists, and Kurdish politicians are in prison for allegedly supporting the PKK on the basis of a tough anti-terrorism law that imposes severe penalties on those who do "propaganda for an armed organization". The predominantly Kurdish south-east remains one of the country's least developed areas. Even the government's expressions of willingness to respect the cultural rights of the Kurdish community of the past few years have so far remained largely symbolic. The agreement between Öcalan and the government remains secret – it is not clear, then, what concessions Erdoğan is ready to do. But the peace process is unlikely to succeed without some.

After a first moment of impasse in the negotiations on the modalities of the withdrawal of the PKK outside the Turkish borders, overcome on April 9th through the creation of a parliamentary committee which will monitor the peace process as the Kurdish deputies asked, the debate on the new constitution will test the government's true willingness to come to a deal.

According to reports appeared in the newspapers, during the meetings with the BDP Mps, Öcalan seemed favourable to the presidential system strongly asked by Erdoğan. If the government, in its turn, shows willingness to discuss the proposals put forward by the BDP in early April, including the recognition of Kurdish as second official language, a new definition of citizenship also including the Kurdish identity, or the establishment of "regional parliaments", the end of the conflict may get closer.

"Let no other mother mourn her son"

The wife of Ali Tekdağ, who died November 13th, 1994 in Diyarbakır, has never lost her hope in justice and peace: "I want to know where the body of my husband is, I want the perpetrators of his murder tried and no more blood shed in vain", she said in Diyarbakır at the end of the 415th meeting of the “Saturday mothers”, a group of women seeking justice for the 1,312 disappearances of the dirty war against Kurds in the nineties. "Along with the mothers of soldiers who died, we must demand an end to this war. Peace, peace, peace, and that no other mother weep over the death of her son. This is what I want".