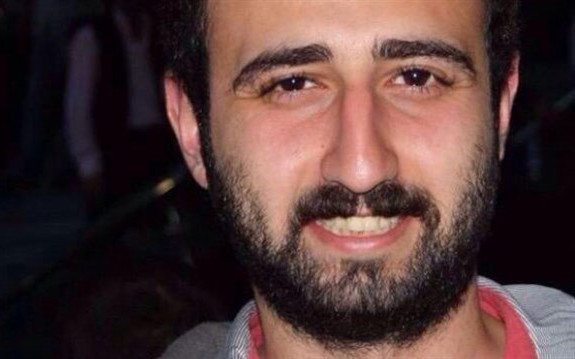 Güler Aziz died in September while fighting in Rojava, the predominantly Kurdish region of Syria. His corpse, however, had to await too long before it was able to return home

As of last August, Turkey is preventing the repatriation of the bodies of fallen fighters in the militia ranks in Rojava. After 59 days of waiting, the family of Aziz Güler, a twenty-seven yr. old man killed in action on September 21, has managed to break this de facto embargo and bring the body of their loved one to Istanbul, where the funeral was held on Sunday, November 22.

I visited the house of Aziz when this sad story was still far from resolved. I was struck by the grey and austere atmosphere in the apartment, located in the outskirts of Beşiktaş. The wide entrance hall was furnished only with a large carpet and several chairs arranged along the walls. It all seemed ready, the air of sadness, in order for his family to tighten around the coffin all the more and overcome the pain of his loss. The coffin, though, was not there, still missing after 40 days.

The mother and brother of Aziz had welcomed me and told me of their family drama, soon to become a national matter. There in the bedroom of Aziz, among his history, economics and politics books, with his photographs, they sat on the bed and I at his desk. The father was not there, he was in Qamislo, in northern Syria, at the hospital morgue where the body of his son was kept for so long.

Aziz’s family is of poor origins, coming from the region of Bingol, in Istanbul, several decades ago. Aziz and his brother, Umut, were born and raised in the great metropolis. Aziz was always involved in politics and was a fervent activist, one of those for which the theory cannot be separated from practice. At university he founded a student union and served in the army within socialist youth groups. A man of action, therefore, who in the face of what was happening in Rojava had decided to personally do something about it. Little more than a year ago, then, he was to join the Birleşik Özgürlük Güçleri (BOG) party, a fighting group of Marxist inspiration and affiliated to the more famous Kurdish YPG.

For three weeks the family had lost track of Aziz, who left without a word to anyone. Only later, through a contact, they came to know of his choice to join the fight in Syria. At first the family was kept up-to-date exclusively through the internet, through the news and videos posted on the social media of Aziz’s organization. Especially through Twitter. The first contact was made after the attack in Suruç last July, when Aziz was able to connect with his loved ones to reassure them of his good health. Even the news of the death of Aziz, which occurred due to a land mine, reached the family via a BOG Tweet.

Had there been any other and more direct communications with Aziz, my feeling was that the family did not want to tell me, for fear of having to deal with more problems with the government than they already had.

At that point, through the mediation of some parliamentary members of the HDP and CHP, the father managed to get an appointment with the governor of Suruç. The governor, who is legally responsible for authorizing the body back to Turkey, did not give his approval. Only after much insistence and pressure, the man admitted that the ban on repatriation was being enforced, albeit unofficially, directly by the Prime Minister Davutoğlu.

Since the Turkish authorities continued to avoid direct contact with the family, they decided to go to court.

Assisted by the family’s lawyer, Sinan Varlik, family members filed a complaint to the Turkish Constitutional Court against the decision of the Suruç government. Turkish law prohibits the repatriation of remains in a single case, that is, when it could constitute a possible epidemic outbreak. However the family had a certificate issued by the Qamislo health authorities, clearly rejecting this possibility.

The court's decision surprisingly came the following day. The court stated that the court may intervene only if there is a measure to be challenged, but the governorship has not yet officially announced this, either positively or negatively. Therefore the complaint was rejected.

At this point, the effort on behalf of the institutions was clear, to punish the family for the sins of Aziz or because he enlisted within the ranks of those that Turkey considers terrorist organizations.

Since a higher appeals’ court does not exist, the family decided to appeal to the European Court of Human Rights, by submitting a request for an urgent procedure to return the body and a second request for a ruling against Turkey for human rights violation.

It is at this point that the hostility of the government gives way to an unexpected green light: the body of Aziz is finally able to return. If we reached this point thanks to pressure from the press and the institutions, avoiding this from turning into an international case, or simply because the "punishment" was enough, it is to this day unclear.

The important thing is that Aziz’s body can now come back home, be buried in his hometown, near the people who will now be able to go to his grave to mourn his passing. Umut also came to the funeral, held in the district of Gazi, "It's embarrassing to admit happiness in being able to bury my brother’s coffin."