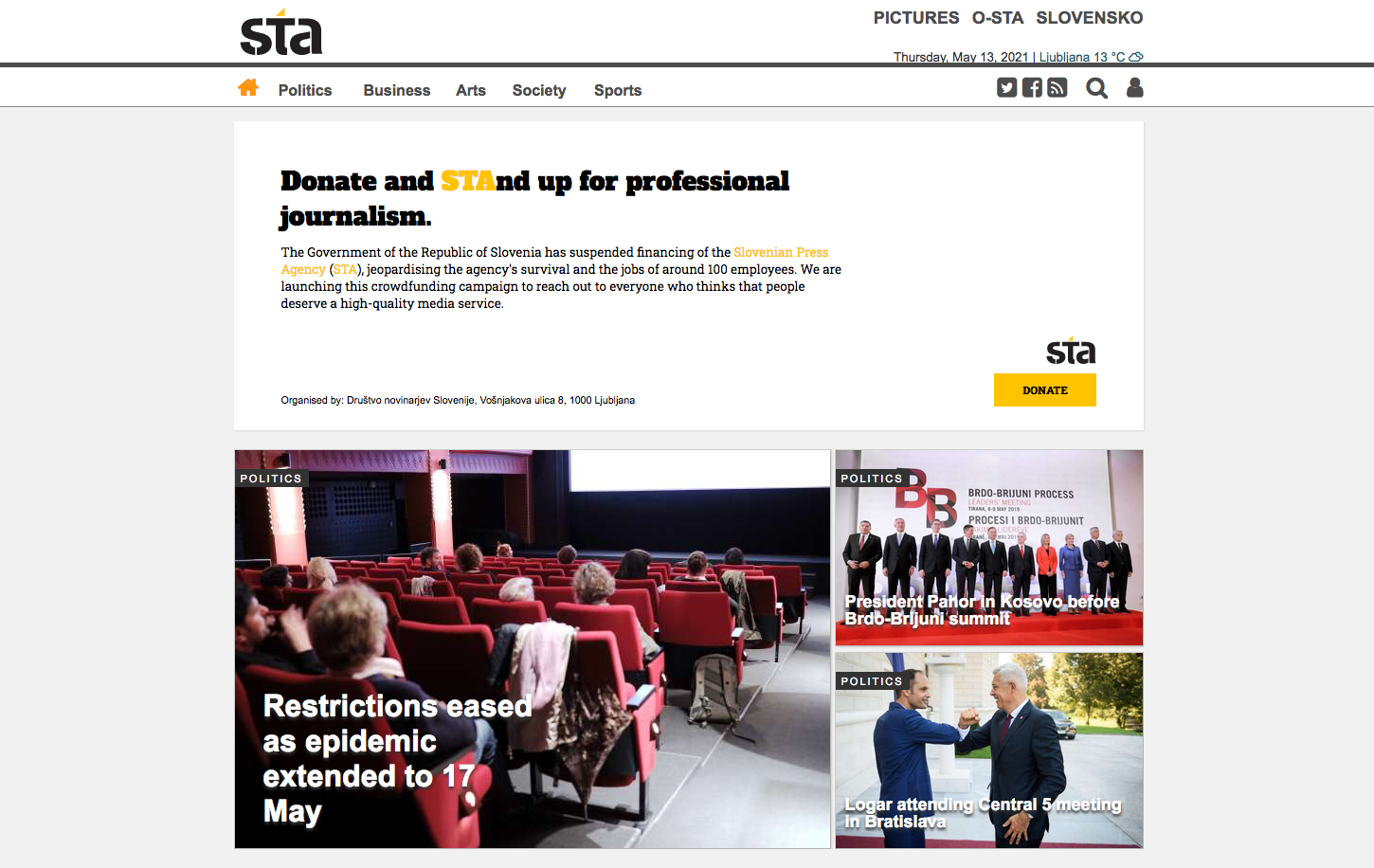 A fundraiser to save the agency, its independence, and the jobs of its employees

Thirty years after its foundation, the future of the Slovenian News Agency is at risk. Janez Jansa's government has blocked state funding pending the delivery of a number of documents. For the agency, however, the request is an undue political interference

189,000 Euros were raised in one week to save the Slovenian press agency. The STA has been without state funding since the beginning of the year. The money raised will be used to disburse the salaries of May. Meanwhile, the company has asked the judges to issue the government an order for the payment of the two million Euros in grants that allow it to function.

To understand what is happening, we need to take a few steps back. The relations of the centre-right governments – and above all of Janez Jansa – with the press have always been difficult. The belief is that the "mainstream" mass media are in the hands of the liberal centre-left and that the narrative they give of the country is not at all "balanced". Immediately after independence, the attempts to set up a newspaper in line with the centre-right failed, as did further attempts to find space in "authoritative" newspapers. Hence several portals, periodicals, and even a TV station in line with the premier's party were born. Their main concern is to "expose the lies" told by other media and to denounce the "lack of patriotism" of the centre-left, ready to "tarnish Slovenia's image internationally in order to harm Jansa".

On the other hand, critics accuse Jansa of creating a machine that only serves to throw mud on his opponents and is compromising the credibility of the Slovenian media and political system. A small empire created thanks to the money arrived from Hungary, which uses the political rhetoric of Donald Trump with its opponents and which would follow the steps of Viktor Orban, who first created his own counter-information network and then, as soon as he rose to power, "normalised" the main national media, starting from the national press agency and the radio and television system. The difference, however, is that Orban could count on an overwhelming majority, while Jansa can barely stay afloat thanks to the Slovenian constitutional order – which makes it possible to govern even without a firm majority in parliament – and risks returning to the opposition after the elections, which are scheduled for next year.

A monitoring mission of the MFRR consortium, of which OBC Transeuropa is also a part, will be held in Slovenia at the end of May. Meetings are scheduled with journalists, trade associations and trade unions, the public broadcaster, and national press agency. Media Freedom Rapid Response partners intend to prepare a report on press freedom in the country ahead of the Slovenian EU presidency semester starting in July.

What is certain is that Jansa will hold on until his opponents have the strength to chase him away. Meanwhile, a real "war on the media" is going on. The attack against the STA began in March 2020, when the prime minister branded the agency as a "spreader" of lies for relaying the concern of some international organisations for Jansa's attacks against journalist Blaz Zgaga, author of a text – reprised by various international newspapers, including L'Espresso – in which Slovenia was compared to Orban's Hungary.

The real breaking point, however, came in October, when the STA published an interview with controversial rapper Zlatko. The singer, who had just released a new album, had attacked the government and its anti-Covid measures. In addition, Zlatko had been given more space than the meeting between Jansa and Orban, scheduled for that very day. Jansa immediately branded this as a "national shame". A few days later, the government communications office asked the STA to provide a whole range of data, including the number of interviews with singers on the occasion of the release of their albums and the length of individual contributions. According to the director of the agency, Bojan Veselinovic, the government office was not entitled to obtain such information.

Technically, the agency is a state-owned trading company. Its board of directors consists of 4 members appointed by the parliament and an employee representative. At the moment, 3 have taken office at the time of the Sarec government, while one in the last year under Jansa.

Pending the delivery of the data requested, at the end of November, the government office blocked the disbursement of public funding to the agency. This immediately turned into yet another political clash that soon crossed national borders. The situation seemed to be unblocked in January, when an amendment wanted by a government force, the Modern Center Party, and voted by the centre-left opposition, imposed the disbursement of funds.

In defiance of the law, however, the funds were blocked again the following month, and the clash intensified week by week. In March, the services of the STA were suspended in various ministries, as no general agreement had been found on the renewal of the subscription. Meanwhile, Jansa invited director Bojan Veselinovic to resign and the government asked the Board of Directors to remove him. Labour inspectors and police went to the agency to check for any irregularities in management. Veselinovic stayed, the funds did not arrive, and now there is no more money to pay the employees. Eventually the required documentation was sent, not to the government communications office, but directly to the cabinet of the head of government. There they refused to collect the package, which was returned to the sender. The STA, however, did not want to take back the package, which thus remained in the hands of the postman.

At this point, the only certainty is that, thirty years after its foundation, the future of the STA is at risk. In this period, it told the country to Slovenia and to the world. Its texts form the backbone of the entire national information system. The agency covers all major political, social, economic, cultural, and sporting events considered important for Slovenians. Its archives contain nearly 2.8 million news items and about one million photos. To save it, the Association of Journalists and trade unions, assisted by the main newspapers and many of the most prestigious names in national journalism, launched a fundraiser through the same toll-free number used to help victims of natural disasters. The intent is to find the money to keep the STA alive and thus preserve its independence – allowing it to describe Slovenia as it is, without risking turning it into an instrument of a new national construction.